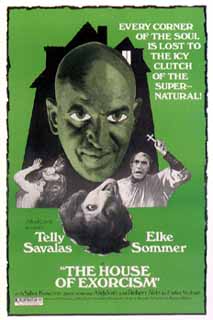 Also known as: The House of Exorcism

Director Mario Bava has legendary status amongst horror fans, and with good reason. Seminal works like Black Sunday, Blood and Black Lace and Bay of Blood have anticipated whole sub-genre of the horror film. His imagery is legendary, and prefigures Dario Argento in his use of lighting, mood and cinematic violence.

"Lisa and the Devil" is classic Bava. There's a few violent scenes - one shocked me a bit, which is pretty hard these days, when a man is run over about ten times by the same car! - but generally it's a slow mood piece. And what mood it is. Bava has created what would seem a study in necrophila and death., along with a dash of Satan here and there.

Plot isn't a huge factor here. Elke Sommer - who I've never been a big fan of, but quite suits the part and looks great here - is stranded in a storm in a creepy mansion with some fellow travelers. I think it's Italy somewhere. Lisa (Elke) had already seen a picture of Satan on an ancient fresco and guess what - the Devil looks like Telly Savalas. Back at the mansion, the butler turns out to be Telly Savalas, with ever-present lollipop, no less. This butler seems to keep dummies who sometimes look like live people - quite a creepy effect, if you have a fear of dummies.

Things progress, as the owner of the mansion and his mother weave their insidious power over their guests. The past takes over and Lisa is made to realize she is the reincarnation of the owner's unfaithful lover. In one outstanding scene, the man makes love to the catatonic Lisa, the skeleton of her former self lying on the bed with them ... Bizarre and memorable.

Deaths ensue as the past and the butler/Devil manipulate events to a conclusion of sorts in an aeroplane. But rather than spell out the story, it's the film's qualities I want to look at. It's not really an "actorly" piece or even hugely well-written. There's just something in the visuals, the somber, melancholy music and basic plotline that makes it a worthwhile viewing experience for a horror aficionado. Ol' Telly makes a memorable presence too - though I'm not sure this part is a huge stretch from "Kojak".

"Lisa and the Devil" was butchered into a version called "House of exorcism" soon after initial release, with a possession plotline thrown in, and footage of Elke vomiting toads, and swearing. This is not the version I saw - it sounds like a lesser film compared to the quiet poetry of this one. Recommended, and worthy of the hype surrounding Bava.