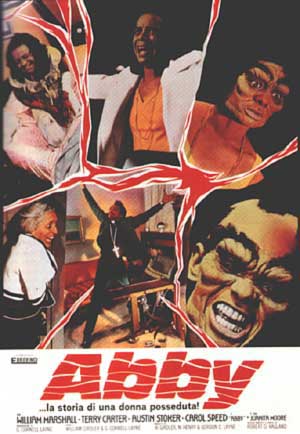 This one is a bit of a rarity, so thanks to the good people at Graveyard Tramp for flinging a copy my way. What we have here is basically a blaxploitation version of "The exorcist", directed by the redoubtable William Girdler, of "Day of the Animals" and "The Manitou" fame, just to name a few. It's a rarity because the studio behind the exorcist took umbridge at the similarities, and forced it's withdrawal from cinemas at the time. But, thankfully, it's still around in "underground" form. Was it worth tracking down? Let's take a look.

William Marshall from Blacula, a commanding presence if ever there was one, plays a priest/archaeologist named Garnet Williams, who accidently releases a lustful Nigerian demon called Eshu from a sacred canister while on a "dig". From there on, all Hell breaks loose. His son Emmett's wife, Abby, starts acting strangely back in the good ole U.S. of A. Her skin is freezing to the touch, she obssesses about fried chicken (well, I just spotted that), she cuts herself and begins to spout obscenities, drool white foam and make lewd advances at all and sundry. She's normally a marriage counsellor, but a therapy session turns into a bout of Abby cursing and swearing at her victims. Things go from bad to worse, as she kills an old woman, seemingly a family friend. Emmett and Abby's Momma are distraught. He tries to convince his father to return and take a look at Abby, as she seems to exhibit no medical symptoms.

Finally, Garnet returns, becoming aware that it is indeed Eshu possessing his stricken daughter-in-law. But she takes flight, killing more people, beating up an entire hospital staff, and heads for the local disco, my man. Eshu indulges its sexual appetite at the establishment, and while Emmett and a friend can do nothing to dissuade it, Garnet finally appears. Can he exorcise the foul spirit from Abby and save her soul, or is she damned to Nigerian Hell?

Well, that's a bit of a plot outline for you. This film has "blaxploitation" elements, but is hardly a supernatural Superfly. It's set in Louisiana, so we don't really get the full on Ghetto inner-city thing happening - the characters just happen to be black, although the fried chicken seems to be an ongoing theme! William Marshall always shines in his roles but some of his exorcist dialogue in the climactic exorcism goes a bit way out, into a sort of hippy, crystal-loving, peace-love-and-mung-beans zone. Carol Speed tries hard as Abby, even singing for real, the song "My soul is a witness" in church. Pity the churchgoers don't seem to approve. I think Girdler's filming cheated her of some of her performance, using lots of weird angles and freeze-frames, which I never like - I find they always take me "out of the movie". The makeup's hardly Dick Smith, but that doesn't really matter, I enjoyed it for what it was. Very miminal, just bushy eyebrows and glaring, white eyes. Still, good enough for me.

What I didn't like, was the voice of the demon. This may have been a southern production, but why use someone with such an obvious southern accent. The film was obviously not a comedy - shouldn't they have used a more "alien", evil voice? I just don't get it. They didn't even distort it that much, to add a creepiness. Oh, well, them's the breaks, I guess.

I suspect you can tell that I have a few reservations about this film - I do. However, I'd see anything with William Marshall in it, just to hear that voice again. And really, ya gotta love the basic premise, and straight from a great era of film-making. I just wish the execution had been a bit more thoughtful, and we might have had a classic on our hands. On the whole though, definitely worth a view, and no longer a challenge to track down.