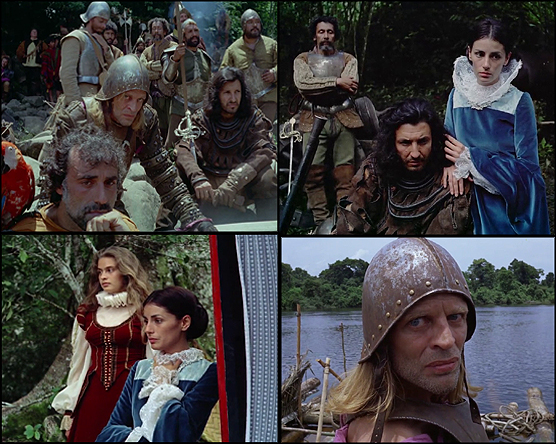 It’s the age-old question. Can watching a film make you sick?

It’s interesting how linked to our senses, the appreciation of a film is. I was watching Werner Herzog’s West German classic with a queasy stomach the other day. I think it would have been an uncomfortable experience even feeling one hundred percent, which is a compliment to the film-maker in this case. However, feeling ill and viewing Aguirre, the Wrath of God at the same time, made for a sensory experience I won’t forget too soon. Years ago, my whole family watched Greystoke: The Legend of Tarzan, Lord of the Apes as we were all coming down with a gastric bug. By the end of the film we had a bucket each, and it was not a happy household, to say the least. To this day, I have something of a physical phobia of Greystoke and can never watch it again.

Not so with Aguirre, the Wrath of God. There’s simply to much in there to feast your eyes upon, even though from a human point of view, it is a story of utter failure and madness. When I started the film I was feeling pretty normal, a few minutes in my stomach began to roil. It’s the 1500’s, and a team of fully armored Spanish Conquistadores, dragging cannons and dozens of chained ‘Indian’ slaves, stumble down the Andes mountains into the jungles towards the east, in search of the fabled Inca country of ‘El Dorado’. Leading the expedition is Gonzalo Pizarro (Alejandro Repullés). From the moment we start watching, the mission has begun to fail. Weighed down by armor, the noblemen and noblewomen wearing full aristocratic clothes in the sweltering humidity, they’re nearing the end of their supplies and lost. They struggle through mud, cursing their surroundings. Water hits the camera lens. Shackled slaves stagger and fall. You can tell this was not a comfortable film shoot, done completely on location in terrible conditions. I’ve read more about the actor playing the title role, Klaus Kinski, and he was clearly a mentally ill man. Watching him attack the hapless slaves with what seems to be a genuine ferocity, made me sink further down in the couch. Apparently there was a lot of trouble behind the scenes between Kinski and Herzog. At one point Herzog threatened to shoot both himself and Kinski, if he didn’t return to filming after one particularly bad tantrum. Happy times! I felt somewhat ‘green’ at the thought of the stress behind the making of the film, with Herzog trying to complete things and facing problems at every turn.

Staring at early defeat, Pizarro orders a group of forty men to scout ahead by raft down river. If they do not return to the main party within a week, with information about what lies ahead, the main group will return home and abandon them. Pizarro chooses Don Pedro de Ursúa (Ruy Guerra) as the commander of this new group, Don Lope de Aguirre (Kinski) as his second-in-command, the lazy, obese Don Fernando de Guzmán (Peter Berling) representing The Royal House of Spain and Brother Gaspar de Carvajal (Del Negro) to bring the word of God to the ‘pagans’. Also in tow, are Ursúa’s mistress, Dońa Inés (Helena Rojo) and Aguirre’s fifteen year old daughter, Florés (Cecilia Rivera). Several rafts head down the river, but the troubles begin straight away. One raft is stuck in a swirling eddy and lost, with all men missing or dead, either shot by each other, or by indigenous peoples’ arrows. Ursúa wants the remaining dead to be given a Christian burial but Aguirre disagrees, and openly so. Believing it would waste the expedition time, Aguirre rebels and has a cannon fired at the dead men’s raft, blowing it to pieces and sending the corpses down the river.

Soon the river rises, and washes the remaining rafts away. After this disaster, Ursúa wants to return to the camp, but Aguirre mutinies. He claims untold riches and an empire awaits them if they abandon Spain, and claim El Dorado for their own. Ursúa and a soldier loyal to him are shot – but not killed at this point – and imprisoned. Aguirre proclaims Don Fernando, Emperor of El Dorado. Inés cares for the injured Ursúa, who refuses to speak again. Brother Gaspar leads the show trial against Ursúa, and ‘The Emperor’ surprises Aguirre by granting clemency for the defendent, who was found guilty and sentenced to death. The group build a new, larger raft and proceed down the river. They kill an Indian couple who approach peacefully, Gaspar proclaiming them heretics for trying to listen to sounds from the bible, when they hand it to them. They run low on food and begin to starve on a few corn kernels, but the Emperor continues to dine in opulence, and pushes their last horse off the raft because it annoys him. He is later found strangled, and those that remain feast on his meal. Aguirre declares himself leader, and Ursúa is taken into the jungle and hanged. They attack and burn a native village and some of them are killed with arrows. The expressionless Inés walks into the jungle, and disappears.

Everyone begins to lose their mind and deny reality. They spot a wooden ship perched high in a tree, and claim it an hallucination. The natives press their attack, and the deadly arrows flying through the air are endless. Gaspar claims the arrow sticking out of him is a product of his own mind. Aguirre’s daughter Florés is killed, and soon the rest of the men. Aguirre is left alone, declaring himself ‘The Wrath of God’ and that he will marry his own daughter, going on to found a new pure dynasty in El Dorado. Now all that’s left of the expedition are the insane Aguirre, some arrow-filled corpses and dozens of monkeys swarming onto the raft, as it drifts slowly into oblivion.

It’s amazing how oppressive and claustrophobic, the beauty of nature can be. In my slightly unwell state, I craved the onscreen sight of dry, open land. I felt suffocated by green leaves, water and birdsong. Green, green, everywhere. How can this be? I put it down to the filmic skill of Herzog in the main, and the suffering of the cast and crew. In full heavy costume, you can see them suffering and sweating in the embrace of the jungle. Their hair is lank, the clothes muddied and sodden. Water is everywhere, splashing the camera, dragging us in to the experience. Was I projecting myself into their situation? It was something of a relief when they found the Amazonian village, which is in a dry clearing, even though it led to the beginning of their ultimate downfall. In fact, I felt completely relieved (and well again) when the expedition finally and utterly failed, and the monkeys reigned supreme on the raft. Nature had reclaimed a balance, and these humans who were so at odds with it, were gone. At least one of the soldiers has a nice moment with a butterfly, before all hell breaks lose.

Whatever chaos was going on behind the scenes, Herzog coaxed a great performance out of Klaus Kinski. His Aguirre is an understated madman, at first quite rational but clearly plotting his own agenda. He does have explosive outbursts but is calm for the most part, even when he’s the last survivor and left with his madness. The thick, jagged face of Kinski is unforgettable, especially under that iconic helmet. Aguirre walks with a marked limp, and often stands at a odd angle to everyone else. He is at odds with his world, spurning gold and seeking power and fame for their own ends. The rest of the cast are fine, particularly Edward Roland as Okello, the black slave who wants to claim his own freedom and wealth. Helena Rujo as Inés also excels as a woman who senses the imminent death for them all, her impassive face belying her grief at losing her lover, and any hope of survival.

In a way, in Aguirre, the Wrath of God the production, location and themes are the performance. The actors are consumed by the presence of the unforgiving environment, closing in on them and lapping at their feet. This is the film which explores human folly – and failure – in the purest, clearest way. We know from the opening seconds, that this group is doomed down to the last man. When an Incan slave plays his pan pipes to a seemingly irritated Aguirre, we get the sense that this slave knows all is doomed, and is laughing at him. This is a film of memorable images that the force of nature dictated, not man. The scene where the last horse, thrown off the raft by the arrogant emperor, swims to shore under it’s heavy cloth cloak and hood and stands motionless, lost in the wilderness, is an image for the ages. Thomas Mauch, the cinematographer, must have been truly skilled, to capture these incredible scenes in what was a very challenging situation. I must also mention the memorable music by Popol Vuh, with it’s choir and organ sounds interwoven throughout the proceedings. It almost seems to be another presence in the film, the personification of nature observing the madness of humans consume itself, and burn out.

I’m happy to say I survived the experience of Aguirre, the Wrath of God without resorting to a handy bucket, remain a nature lover, and was engrossed in and enjoyed the film. However, I don’t want to rush out and raft down an Amazonian river, any time soon. I’m sure I have my own delusions and follies, but challenging the forest in those conditions isn’t one of them. Hats off to Herzog and company however, for braving the environment and creating an intensely visual and memorable work of cinema. In fact it’s a unique film in the annals of shot-on-location epics. For those craving the spectacle of humans overreaching themselves, attempting to defy nature and being put thoroughly in their place, this is the seminal film. Nowhere has complete madness, and abject failure been captured in such a beautiful way.