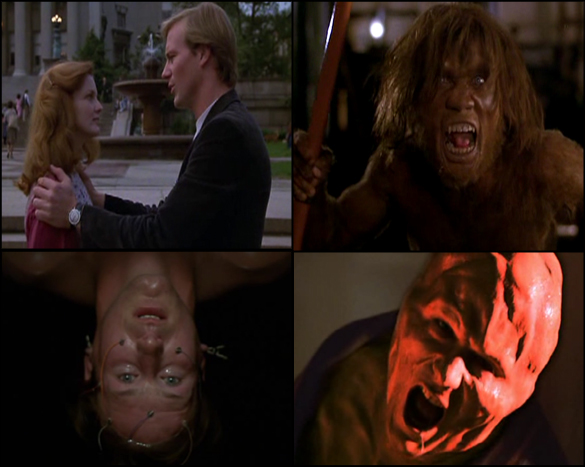 Sometimes out of conflict great things spring forth. Writer Paddy Chayefsky, who penned the original novel of Altered States in 1978, ended up removing his name from his screen adaptation - leaving his real name, Sidney Aaron - after creative conflict with director Ken Russell. Yet Russell's vision is at times amazing, controversial, confronting and memorable. True to the Russell pantheon in it's visual excess, yet Altered States benefits from Chayefsky's literate script which strikes me as being quite accurate in capturing how quite a lot of academics would talk. With standout performances from all involved, a fascinating story and makeup effects from one of the original masters, Dick Smith, this is a film to own and watch. Please be warned of spoilers, as I'm going to do the full plot in this review.

Eddie Jessup is a searcher, looking for a universal truth. Whether it's God or the original self, it doesn't matter. As a university professor of abnormal psychology, Jessup is studying schizophrenia in the late sixties, and consequently begins to be drawn into studying other states of consciousness. He's single-minded and introverted, but brilliant and has the respect of his colleagues, some of which are his friends. When we first meet him he's floating in a sensory-deprivation tank, intrigued by the hallucinations he encounters in his already fevered brain. His research is about to take a radical and dangerous turn. At a university party, Eddie (William Hurt's first film role) meets Emily (Blair Brown) a pretty doctoral candidate of physical anthropology. She can tell he's weird and intense, but is strongly drawn to him. After they've made love in quite an erotic scene, Emily asks Eddie what he's thinking about. He says that he sees visions of Christ on the cross when having sex. Eddie tells her about his belief in God, before his father died painfully of cancer. When they both get teaching positions at Harvard, Emily suggests they get married. He eventually agrees, but can't seem to show her the love she shows him unconditionally.

Moving forward to 1974, Eddie and Emily, now with two daughters, are separating. All Eddie's idea, as we find out from his scientist friend Arthur Rosenburg (Bob Balaban) as Emily still loves him just as much. However, Jessup is so utterly focused on his theories and investigations, that he must remove himself from his family and all responsibilities to progress further. The driven Eddie is heading to Mexico to track down a mushroom ceremony held by a tribe of Mayan descendants. After they cut his hand and put his blood into the mixture, Eddie drinks it and has incredibly strong hallucinations, viewing three-eyed goats being crucified, his father suffering and he and Emily naked, tuning to stone and blowing away in the wind.

Taking the mixture back to Boston, Jessup resumes the isolation tank experiments with Arthur helping him again. This time, he injects the potent hallucinogen to amplify the isolation tank effect. As Arthur listens, Eddie talks about regressing to a primal proto-human state, where he is hunting and killing a goat. At one stage, a guttural growl is heard from the tank, and Eddie is brought out with blood on his mouth. Not only that, but X-rays and blood tests show temporary simian characteristics such as an ape-like skull, which get Jessup even more excited! Emily comes back from an anthropology trip, still in love with Eddie and concerned that he's cracking up. His genetic structure altered by his awakened primal memories, Eddie begins to experience physical changes even at home, his arms and brow swelling and his feet becoming ape-like, then reverting back. Undaunted, Eddie tries the experiment again, and this time comes out completely physically changed by the hallucinations, emerging as a small ape-like man, played by a smaller actor named Miguel Godreau. The ape-man goes on a rampage, brutally beating two guards at the laboratory and ending up at the zoo, killing and eating a small antelope before falling asleep and reverting to Jessup, whom the police subsequently discover.

Emily retrieves Eddie from the police station, deeply concerned about his mental state. She needs him back in her life but he insists on another submersion in the tank, along with a new dose of the hallucinogen. Watched by Emily, Bob and the skeptical Mason Parrish (a histrionic Charles Haid) Jessup begins the experiment anew and this time, after a few minutes of seemingly nothing happening, he begins mutating again, this time into something even before an ape-man. A sort of formless, screaming, embryonic shape, emitting huge amounts of energy. Bob and Mason drag Emily out of the room but are knocked unconscious by the bizarre events taking place in the lab. Emily revives and re-enters the room to find Jessup replaced by a quiet whirlpool cloud of protoplasmic energy, from the beginning of existence. Emily wades into it's center and maintaining her grasp on humanity, pulls Eddie out of it and back to reality.

Later Mason and Bob argue over the experiment and it's ramifications for the scientific world, while Emily seems to be heading for an hysterical nervous breakdown. She takes Eddie home but they make love off-screen. Jessup describes that the beginning of existence, that he experienced finally in the experiment, is empty, lifeless and indifferent. That he realises now that only human life matters, and what we make of it. Despite his revelations, Eddie claims he can't control the experiment and the pull of the abyss he's created. He begins to change again into the glowing, embryonic Eddie creature. Emily rushes to embrace and help him, but contact with this being causes her to transform into a being of pure, fiery energy that is obviously in pain. Eddie, still retaining his mind, smashes his one arm - the other had disappeared into his blob-like body - into a wall, over and over again in an attempt to regain his humanity. His human self flickers through the creature and finally after much effort, Jessup is himself again. He embraces Emily and they briefly both turn into a glowing ball of energy before becoming naked and human again. Eddie tells Emily he loves her, finally giving her the affection she craves, and very much deserves.

Long a cult film, Altered States didn't do too well at the box office originally. Being neither a Star Wars-type science fiction piece or pure horror, Eddie's journal is pretty cerebral and inward-looking until the pretty straightforward, sentimental message of the end. I guess that could have turned quite a portion of the paying audience away, back in the day. Still, there's much to enjoy here. Performance-wise, Hurt and Brown are excellent and they both convey scientists passionate about their own quests. Emily is also passionate about Eddie, and Blair Brown brings across her single-mindedness about him that even baffles her. Even though we have moments of subtle drama, you know it's a Ken Russell film when Jessup hallucinates scenes of naked bodies falling into a fiery Hell, multiple-eyed goats lashed to crosses and naked statues being blown to dust by a howling wind. The final lightshow that depicts his descent into the moment existence began is nice to watch, being quite abstract and kaleidoscopic. Dick Smith's makeup work is fantastic, I particularly like the ape-man Jessup becomes, who is actually quite fearsome with his primal rage, as played by Miguel Godreau. Eddie's more primal, blob-like self is obviously well-done, but because of the glow given it by the special effects team, much of the detail Smith would have put it in is lost. Still, the glow is part of the story, the primal energy of creation, so we need to have it seen. I have read some criticism of the film's ultimate ending - that after all Eddie Jessup's searching, he just ends up with the answer of 'Love is all you need' essentially. I found it a nice emotional pay-off after all of Emily's suffering. Perhaps in some ways Altered States, at it's core, is an elaborate and distinctly oddball chick-flick. This is coming from someone who enjoys the occasional chick-flick, by the way. The wayward rogue finally sees the error of his ways and brings true love to our heroine. So what if he needs an isolation tank, and a potent hallucinogen to do it?

If you like your science fiction literately written and well-made, yet still with a vein of human warmth running through it, I can definitely recommend Altered States. The flamboyance of Ken Russell, and the detail and articulation of Paddy Chayefsky's screenplay merge into a nice balance that withstands the test of time. Well worth a re-view!