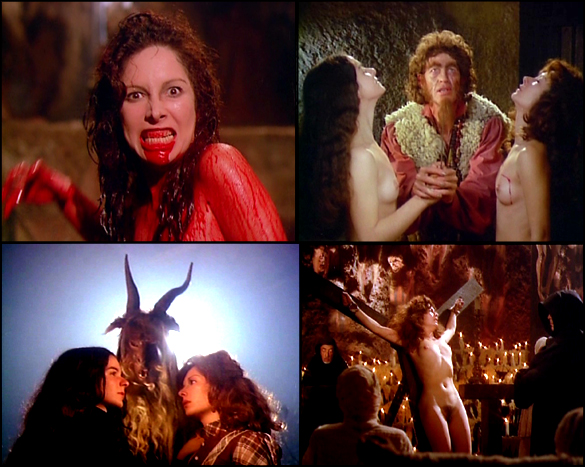 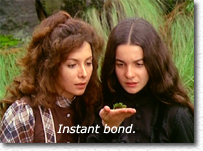 We open with the infant who is to become Alucarda being born. In a mouldering tomb, Alucarda is birthed by her nameless mother (played by Tina Romero who also plays Alucarda) A strange, feral-looking man takes the baby away and leaves the exhausted mother to her fate. We hear Satanic noises echoing throughout the tomb as the girl looks around fearfully. In the present, we meet the young Justine (Susana Kamini) who is just now entering a convent in a Mexican convent in an indeterminate era. Justine is welcomed by the bespectacled Dr. Oszek (Claudio Brook) who is taking his daughter Daniela (Lili Garza) away as he's returned from an overseas assignment. The Mother Superior - these nuns just wear simple smooth skull-caps, they don't seem to have the usual nun 'head-gear', whatever it's called - greets Justine warmly and sends her to her quarters. She receives a visit from out of the shadows - it's the more-grown-up Alucarda. Justine's a passive type and is quickly taken by the strange, intense visitor. They go for walks in the country, Alucarda showing her how bugs mate. Alucarda's a plainish girl but seems to quickly form a close relationship with Justine. They encounter a gypsy band in the forest, who intrigues Alucarda. Among them there's a old, hunchbacked man (also played by Claudio Brook) who looks like the old man who helped birth Alucarda. He behaves in a strange, eccentric and somewhat sinister way. He wants to show the pair some magic, but Justine just wants to go home. They leave, finding the very tomb Alucarda was born in. Alucarda wants to become blood-sisters and brings out a dagger, saying they should die together when the time comes. Justine declines. She then becomes afraid when Alucarda find a coffin and is determined to open it. Upon finding the skeletal woman in it, the girls scream. Satanic noises fill the air and Alucarda seems to suffer a fit of terror. They run outside and back to the convent. 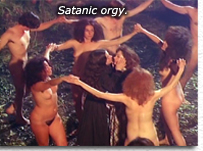 Back at the convent, a priest gives a sermon about the Devil and how he is everywhere, waiting to strike and corrupt the innocent. Young girls panic and sob in terror. Justine passes out and is taken back to her room. Later, Alucarda visits but is gripped by a Satanic influence again. She recoils in horror at Justine's crucifix around her neck and after much pain, rips it off. Alucarda begins spinning around the room in a possessed trance, then strikes Justine when she tries to stop her. The forest gypsy turns up in the dazed girls' room and asks them to accept Satan, giving Alucarda a dagger. Suddenly Alucarda's naked and the evil gypsy rips Justine's robe off. He slashes both their breasts and gets them to drink each other's blood. He then vanishes as blood red fog fills the room. Alucarda kisses Justine and sucks her blood, as Justine screams weakly. Alucarda then leads her dazed friend to a naked Satanic orgy in the forest, where the gypsy appears amongst the revellers with a goats-head mask. One of the nuns who adores Justine senses an evil influence and preys for them. As her beatific face is sprayed with symbolic blood, she cried bloody tears, and suddenly one of the nude female Satanists is struck dead by a bloody missile from above. As the nun levitates in a holy trance, it seems she may have a power which can combat what's going on with the Devil worshippers. 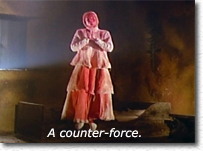 When Alucarda and Justine return for another sermon by the Mother Superior, as the religious teachings progress they're compelled by the evil influence to claim Satan as their Lord and Master. The young nuns are horrified and run out. Justine becomes faint and they call for Doctor Oszek. He tries to bleed the illness out of her with leeches. Justine, in her fever, spots the crucifix on the holy-powered nun's habit and screams in terror. Alucarda is sent to confession but attempts to seduce the horrified old priest. He banishes her from his sight and alerts the nuns. Later, they all whip themselves in a religious frenzy of self-torture and read books about possession - they're convinced both Alucarda and Justine are possessed by Satan. As the holy-powered nun protests, Justine is carried off by the nuns, and they strap both her and Alucarda to crosses for an exorcism. Ripping Justine's clothes off, they pierce her with needles to bleed the devil out of her. The nuns writhe around in religious ecstacy. Alucarda screams in protest and is knocked out for her pains. Doctor Oszek enters the fray and furiously commands them to stop, but it seems that they're too late, and the weakend Justine has died. Oszek carries the unconscious Alucarda to his home. 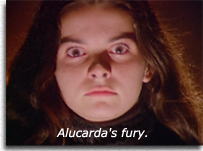 Oszek introduces the frightened, grieving Alucarda to his gentle, blind daughter Daniela. They seem to hit it off. Back at the convent, as the holy-powered nun faints over the corpse of her friend and is carried off, Justine's hand moves ever so slightly. The nuns and head priest call the reluctant Oszek back to the convent - it's an emergency. As Alucarda leads Daniela out of the house, they show him the remains of a charred nun, burned by hellfire they say. Suddenly the head priest shows Oszek she's still alive, and proceeds to cut her head off in a welter of blood. The previously unbelieving Oszek is now convinced in the reality of the supernatural, then realises that his daughter has been left in the presence of evil! They all rush back but the pair are gone. During the search, the holy-powered nun enters the original tomb where the horror began and opens the coffin. In a bath of blood, lies Justine. The nun screams and Justine rises, nude, dripping blood and snarling, scratching and slashing at her face. The nun tries to appeal to Justine's better nature, and begins to calm the raging creature Justine's become. Oszek enters the tomb. Throwing holy water on Justine, the frenzied, screaming girl-creature melts to a skeleton, but not before killing the nun by biting her throat out. There's a lot of blood in this film! They carry the dead woman back to the convent, and find the vengeful Alucarda laying siege to the nuns, taking Daniela with her. As Oszek and the nuns look on horrified, Alucarda uses dark magic to set fire to anyone in her sight. The convent becomes an inferno of death. Monks try to throw holy water on her, but she just blocks it with a wall of fire! This is an amazing display of power, folks. Alucarda's horrified when her friend Daniela falls down a flight of stairs, to be rescued later by Oszek. In a rage, she sets fire to a statue of Christ. The nuns carry in the body of the nun Justine killed, and lift her up like Christ on the cross. She seems to briefly come to life, and at that point, so do her holy powers. Which side will win tonight, and who will be left a pile of ashes on the floor?

Mocetzuma has truly created an amazing film here. Leaving you with much to think about once it's finished, there's more to Alucarda than just naked nuns and blood. We get the sense that Alucarda and Justine are the victims here. After all, who had they actually hurt, before they were strung up on crosses and tortured? Alucarda appears cursed to come under the influence of Satan from the moment of her birth, taking the weak Justine with her. Still, I'm not sure how evil these 'Satanists' are meant to be - maybe they're just a persecuted alternative religion to the dominant Christianity. Alucarda and Justine's fate seems to be sealed once Alucard makes sexual overtures at the head priest. This triggers the puritannical crackdown - following some rigorous self-flagellation - and the final fiery holcaust of Alucarda's revenge. Tina Romero and Susana Kamini put up fine performances as the tormented girls, with Alucarda seeming to need companionship as much as Satan. Romero can play seething evil just as well as hurt, suffering and tormented. Kamini plays a more passive character, and her conversion to virtually a blood-engorged vampire-creature is less convincing. Yet, seen as a pure pawn of the Satanists, this aspect of the plot can be accepted. Claudio Brook as both Doctor Oszek and the hunchbacked-gypsy-who-may-be-Satan fares less well, with his scenes veering into overacting territory, but it doesn't detract from this effective film.

Visually, Alucarda is a treat. The cinematography by Xavier Cruz is a pleasure to view, with atmospheric depictions of verdant forests, mouldering tombs, fog and dark shadows throughout. I particularly enjoyed the circling camera around the self-flagellating nuns and monks as they wailed about possession. It starts with the head priest, moves around each hysterical, thrashing woman and finally comes back to the priest - and we have explored a whole plot-point during this scene. Mocetzuma's a craftsman, well illustrated by the final fiery holocaust which is well-realised by his special-effects team. It's an impressive and nasty scene as Alucarda, spitting out Satanic words with her hatred, causes nuns and monks to explode into flame. Mocetzuma obviously appreciates religious imagery beyond the basic subject matter - the film abounds with crucifixes, images of Christ, blood and fire.

Lovers of bizarre cinema will find much to enjoy with Alucarda. You've got the obvious exploitative elements of violence, gore, sex and nudity. If you're immune to such thrills - you may be the most unique person in the world - Mocetzuma's little masterpiece provides something of a reflection on the suppression of the inner-self - mainly female - by the ruling religion of the day. I don't think he particularly sides with either Christians or Satanists this time, it's clear that Alucarda and Justine cannot win whatever side they align themselves to. I'm now keen to track down Mary, Mary, Bloody Mary and The Mansion of Madness. For Alucarda, I can only say a copy of this little gem is worth every cent paid, and can only be a worthy addition to any cult-cinema enthusiast's collection.