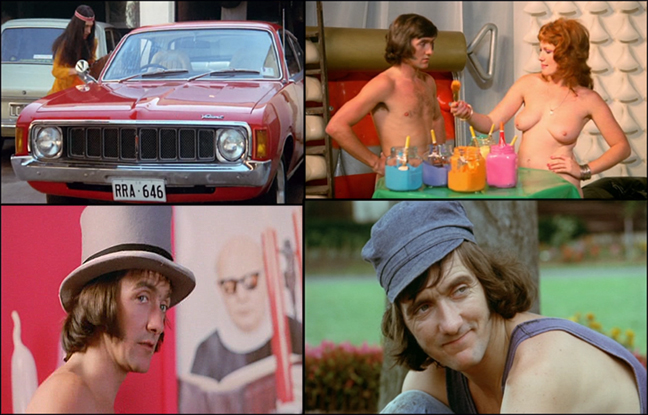 Actor Graeme Blundell made something of a name for himself, by appearing in a few Australian softcore sex comedies of the seventies. Along with Pacific Banana, Alvin Purple is the film he's best known for. For those of us Australians growing up in this era, director Tim Burstall's sleazy little gem features a veritable who's who of Aussie actors throwing their hats - and sometimes more - into the ring. Even Geoffrey Rush! It's probably the best-known softcore film made back then in the land of Oz, but with it's reputation in tow, is it actually any good? Watching this for the first time in 2007 yielded this viewer some surprises.

Twenty-one year old Alvin Purple (Blundell) tells us all about his woes through his narration. Living in Melbourne - you can recognise a Melbourne tram anywhere - he keeps getting frantic urges to rip women's tops off, or just generally proposition them. Of course, we see him doing these lewd acts in his mind, then quickly cut back to the reality of him doing nothing. Alvin ushers in the new year as "the sexless seventies". Then a female neighbour (Alison Curran) knocks on his flat's door for some sugar. He imagines her in the nude, and soon enough, the two are sweet-talking each other about teeth - a strange conversation, if you ever see this - and becoming the beast with two backs in his little apartment. Though Alvin is plain and awkward, he has a certain way with the ladies. In fact, he drives women of all ages wild. Cue the opening credits.

Apparently, it had always been this way for our hapless protagonist, starting from when he was a sixteen-year-old schoolboy. Hormone-crazed girls chased him down the street on their bikes, until his teacher's wife, Mrs. Horwood (Jill Forster) gives him shelter in her garage ... for her own sexual purposes, of course. We see Alvin turning up at the Horwood's on a bigger and better bike each time, until he crashes into a now-locked garage door. He's been found out by the jealous husband.

Years later, as Alvin turns twenty-one, he's given a speech by his eccentric father, of whom friends - including the aforementioned Geoffrey Rush - extract every snickering double entendre they can. Alvin doesn't know what he wants to do to make a living, and has no real direction in life. Their mutual friend, Tina (Elli Maclure) is sympathetic to Alvin and hopes he finds his way. One of his friends offers him a job installing water beds. Of course, Alvin, in the process of installing these beds, is then set upon by ravenously carnal housewifes. He's dressed up in a top-hat and spurs - which promptly puncture the bed so the lovers sink into a pool of watery desire. Given a mutual body painting session. Even a transvestite tries to seduce him, from whom he runs away quickly naked into the night, when feeling the true nature of his bed-partner.

Alvin talks to Tina again and the topic of his sexual adventures comes up. Alvin reveals that he doesn't really enjoy sex, he just goes through with it every time to keep things easy. Tina guesses he doesn't really like women that much, and should see a psychologist. Beginning to fall in love with her, he agrees to go along with it. He begins to see the refined Doctor Liz Sort (Penne Hackforth-Jones) who recommends that he does everything he can to distract himself from sex - cold showers, exercise, anything. Another gorgeous girl (Jacki Weaver) shows up for sugar, and after picturing her in the nude, Alvin does the cold shower and run around the block routine, in fast-motion. Trouble is, Doctor Sort is beginning to fall for him on the sidelines. Just as he's cured of sexual compulsion, Liz turns her back on him, disappointed that an affair won't take place. When Alvin next turns up to therapy, Liz is nowhere to be found and her eccentric superior, Dr. McBurney (George Whaley) explains that she needs to go and find herself, to be a better psychologist. Even more of a revelation - McBurney believes there's nothing wrong with Alvin at all, and convinces the confused young man to work for him. The devious McBurney sends Alvin his frigid or sexually repressed female clients, and Alvin's 'powers' quickly bring them around to sexual expression and ecstacy, thus curing them. McBurney sets him up in a sort of psychelic sex-pad, with all sorts of penis and bodily imagery on display. Think 'clockwork orange' without the ultraviolence!

Of course, such Gardens of Eden can never last, and Doctor Sort pays Alvin a visit in his sex-den, after a tip-off. She blackmails him, claining she'll turn in the whole operation unless he has sex with her whenever she wants. Alvin reluctantly agrees, and soon enough he can barely keep his eyes open when he's servicing his other 'clients'. Eventually though, Liz reveals the truth of what McBurney and Alvin are up to, to the authorities. Australia is shocked. McBurney skips the country, leaving Alvin to go to trial. Alvin asks Tina to marry him, realizing he's loved her all along. Tina, though also in love with Alvin, is shocked by all the lurid revelations and leaves him. It's shown that McBurney was using Alvin's services to make pornographic films for the black market. Alvin is found not guilty and the judge wants to know more about these movies ...

Holed up in his friends' home, Alvin furtively hides, until the furious husbands of the 'customers' throw a brick through their window. Alvin escapes in a hippie disguise, roaring off in a beautiful red charger. Ah, the cars of the seventies, now they had style. The men chase him in what becomes a very long scene, until they corner him at a skydiving club and the fugitive escapes in a plane! Alvin ends up doing an impromptu skydive, landing in Melbourne's Yarra river. From there, the now-famous man finds McBurney disguised as a preacher, extolling the virtues of chastity. Trouble is, some star-struck girls in the crowd recognise him, and strip his clothes off as he runs nude through the city. Poor guy! Alvin hides in disguise again and tries to find Tina. Trouble is, she's now become a nun. Alvin asks her to marry him again. Tina doesn't believe he's serious - that he'll return to his womanising ways, whether he wants to or not. How can he convince the love of his life that he's serious? Work in a convent as a gardener, surrounded by gorgeous nuns hat he can see, but never touch?

For those of us that enjoy seventies sinema, Alvin Purple has a reasonable amount to offer. There's a fair amount of naked flesh - both female and male - and pretty mild, but entertaining sex on display. The actresses are all attractive and enthusiastic. The swinging seventies ethic take full flight in this one. After all, the only main character remotely prudish about sex becomes a nun. Blundell's a generally appealing, kind-faced lead, but it's suprising how unfunny this film is. He doesn't have many amusing lines, and the extent of the humour is basically a few fast-motion scenes of him taking cold showers, running from desperate women and so on. So I'd have to view this one as a failure if it's being sold purely as a comedy. Interestingly enough, the film does seem to try to explore the emptiness of Alvin's sexual obsession - that he lacks true companionship no matter how much fun he has. There are obvious moments of seriousness in the film, that begin to resonate as a character study of loneliness.

You could also hope for a swinging score from 1973, but it's nondescript. The theme song from Pacific Banana stays in the mind much more. I also find the concept of Alvin becoming a gigolo a bit odd - after all, he can win anyone over, why does he need to be set up in a male 'brothel' and presented with customers? I guess the idea was that once these very repressed women come into contact with him, his mystical charm cures them. Still, there could have been a lot more imaginative and ribald adventures for Mister Purple to indulge in. Then there's the big car chase that seems to go on for at least fifteen minutes. I love the car, and I understand it was all in the name of drive-in entertainment, but I suspect the least demanding audiences would have wanted that scene to move along just a bit!

Don't let me put you off Alvin Purple, though. I found it slightly disappointing in some aspects, but quite fun in others. It's certainly a nice fantasy concept - that a man who has virtually nothing to offer, can be irresistable to women. The film must have been a success as two sequels came out afterwards - Alvin rides again and Melvin, son of Alvin. So a lot of folk enjoyed it. Maybe you'll be among them if you give it a go. Personally, if I get a hankering for Antipoean sleaze again, this old reviewer will probably go back to the strange joys of Fantasm and Fantasm comes again.