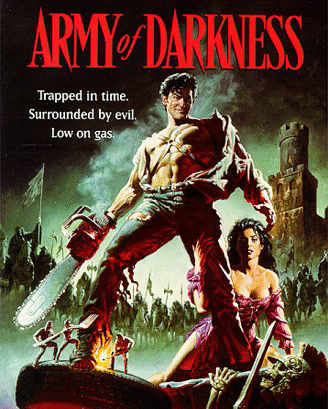 This is probably one of the funniest films ever made. I really wish lead actor Bruce Campbell had made it bigger as a comic actor, as his physical presence, charisma and line delivery are all top notch. At least we got this Evil Dead series to enjoy, and who knows what will be produced in the future?

Director Sam Raimi made a name for himself with the frantic, insane gore-fest, "Evil Dead" in the early eighties. I won't go into any details for that film as it's so well known, why would I tire my fingers cranking out yet more redundant information? Watch and enjoy. The Sequel, "Evil Dead 2", was a sort of remake that threw our deadite-fighting hero, Ash, into the medieval setting of "Army of Darkness" right at the end. It also had far more comedy in it, which set the scene for this one to follow as a full-blown horror-action-comedy.

Ash is a mutilated hero, with a chainsaw attached to his missing hand - lost in the battles of ED2 - but he can still throw a wisecrack with the best of them. Even when he's thrown into a medieval nightmare of slavery, courtesy of the Necronomicon, book of the dead. In an unnamed country ravaged by the demons of the first two films, two kingdoms are at war, and Ash is assumed to be in league with "Eric the Red", one of the warring Kings. Thrown into a pit infested with "deadites", Ash kills them both and crawls his way out. Proving himself to be an independent warrior and also the one foretold in a prophecy, who would destroy the evil dead plague, Ash is finally welcomed into the kingdom and given a task - to retrieve the Necronomicon and say three words correctly. Klaatu Varata Nikto...

After some harsh but humorous tribulations - not only does Ash fight miniture versions of himself, he splits off into Good Ash and Bad Ash - Ash retrieves the book but forgets the words and splutters out only two of them. As a consequence, the Army of Darkness, all the dead in the area, rise up to attack the kingdom, under the command of the distinctly decaying "Bad Ash". Total war erupts, but Ash has a few tricks up his sleeves, courtesy of the modern age. Will he conquer the evil spirits, and make it home?

This is an old favorite, and I've seen it so many times, its almost hard to write about it. But, it played recently on cable and I finally saw the alternate ending - involving drinking drops of magic potion, each drop to make you sleep a hundred years. I can't say I loved this ending but I guess it leaves Ash in an "interesting" situation, if nothing else. I much prefer the original ending, and I think the extra cuts made in the original help the film - the fight between Ash and the little, evil Ashes went on forever in this "alternate" version.

As a singular film, I find the script is magnificent as far as comic lines go. I've used one of them on the home-page, but I don't want to list them, as hearing them - if you haven't already - is the main enjoyment. Many of Campbell's lines found their way into the Duke Nukem games series of yesteryear. Joseph Lo Duca's music is very memorable and will get into your brain for days. There's no rock music, just very grandiose classic themes. The action is cheap but fun - many of the special effects are poorly put-together but somehow with a film of this nature, it's hard to care. It's always nice to see the old-fashioned stop-motion animation used, and AOD has this in spades. There's hordes of animated skeletons, which pleasantly harks back to Jason and the Argonauts. The terror aspects are downplayed, well, at least to my jaded sensibilities, but the film is still strong enough to qualify as a horror, of sorts. I've already commented on Bruce's presence. Sadly underused in Hollywood is he, but I guess he would need a very specific vehicle. I hope there's an "Evil Dead 4", and I have heard some rumblings, but let's not hold our breath. Sam Raimi's more than hit the big time with Spider-Man, but maybe as a self-funded project?

We fans of the deadite saga can only wait and see...