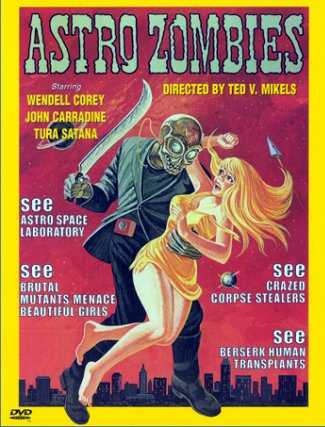 Now, about these Astro-Zombies ... what's the lowdown? For a start, you've got the wonderful Tura Satana, who left an eternal impression in Russ Meyers' "Faster, Pussycat! Kill! Kill!" She plays a probably Chinese spy who likes stubbing out cigarettes in her victim's faces. And why not, I say? She also has a costume change every other scene into slinky, sheer oriental numbers. A feast for the eyes, I can tell you. You've got the actor-par-excellence John Carradine, contributing his mad doctor credentials to the role of Doctor DeMarco, Astro-Zombie maker and all-round misguided good egg.

Heinous murders are being committed and the Government is investigating for an "Astro-Zombie", exiled scientist DeMarco's artificial human, designed for the rigours of space travel. The solar-powered "Astro-man" has been created from a reanimated corpse with some electronic components. The only problem is, it's escaped and, as often happens, the brain has been extracted from a criminal psychopath, hence the murders.

DeMarco and his mute, leering assistant Franchot, played by William Bagdad, want to create another, more stable Astro-zombie to retrieve the first one, and redeem his experiments. But the CIA is hot on his trail led by Wendell Corey as well as foreign communist agents, who want the technology, played by Tura (as "Satana") and her two brutish henchmen. Secret meetings are held in sleazy, smokey nightclubs and as informants and traitors die, Satana gets closer and closer to DeMarco.

At one point, Corey's girlfriend, Joan, who operated on the original owner of the brain, is used as bait to catch the monster, as the Astro-Zombie keeps returning to the hospital, at one point stabbing a nurse to death. But this "sting" fails and leaves our wretched heroes sobbing and calling for assistance, as the creature trails Joan to her home. Finally, the good guys and the bad guys (including the delinquent Astro-zombie) converge on DeMarco's laboratory and all Hell breaks loose. The astro-zombie even gets to have one last gory rampage with a huge machete, which was just left lying around the joint. What with this and the shootout, it's fair to say that not many people survive ...

Having given you a idea of the action, is the film any good? I have to admit there are a lot of dull patches, seemingly padded with (great-looking) cars driving from place to place, and police procedural shenanigans. As you'd expect, any scene with the sadistic Tura is a highlight. The interactions between DeMarco and Franchot - who has his own strapped-down subject to "experiment" on, a bikini-clad female, of course - are gems. I love the pseudo-science spouted by Carradine in most laboratory scenes. The Astro-zombies themselves are odd creations, with giant, plastic skull-like heads and skinny, 'normal' human bodies with joe-public street clothes. Memorable, nonetheless.

One thing that does irritate me intensely with any film is when the lighting is deficient. This film has many night-time scenes, where you can hardly tell what's going on. Even the bizarre opening and closing credits, which feature toy robots and tanks, you can barely see, they're so dark. Ted, I hope your lighting budgets improved! But, being the lovey-dovey forgiving sort that I am, I can get over these minor annoyances. One thing that did make my blood boil were the cuts made to the film on this video. I'd seen it on the big screen years ago and distinctly remembered a painted, topless dancer going through the motions in the club, and some extra gore scenes, such as a machete through the head in the final monster rampage. All gone, in this "Troma" release version. Thanks, guys, or whoever was responsible. I love you doing my thinking for me.

All in all, despite the odd problem, I have to say I appreciate this film immensely. You have to feel something for a film that throws into the mix the venerable John Carradine, an amazing Tura Satana, gore and nudity - if you're allowed to see it - great mad-doctor speeches, great sixties cars, machete-waving monsters that use flashlights on their heads to keep themselves alive when their power-cells have been knocked off, blade-wielding psychos and demented assistants that torture scantily-clad victims who don't really protest that much. If you haven't come across any Ted V. Mikels before, this is a great start. Just make sure you get the uncut version, and don't be a trusting sap like me!