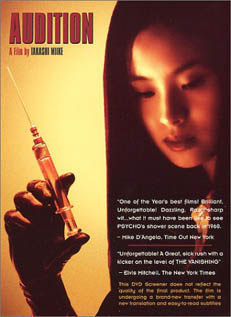 Ye Gods. Japanese horror is jumping leaps and bounds these days over anything Western. This one competes with the much-hyped "Ring" for sheer-mind horror, and towards the end, has one of the most gruelling, sick scenes I've ever seen in a film. Let's try to sum it all up and make some comments.

It all starts fairly innocently, for at least an hour of the running time, which helps build the atmosphere of dread, if you know the film is heading somewhere horrible. A middle-aged widower in Japan - we know from the opening scene that his wife has died - is beginning to long for a new partner. Even his son suggests he remarry. A friend in the media industry offers to run a fake audition for a fake movie, just so he can meet a group of young women he can, in theory, pick from later. All sounds OK?

Of course, we have the inevitable audition scene, with lots of kooky women not making the grade. But our hero, Ryo, has already read a letter from a woman who he thinks will be the one. And the audition confirms this - she's beautiful, quiet and shy, but somehow compelling. So, although her "part" falls through, Asami is called back by Ryo for a date. But is Asami all she seems? Contacts she mentions in her audition have been dead for years, and that's just the beginning. We're treated to a creepy scene of Asami slumped forward on the floor, waiting endlessly for Ryo to call. There's something tied up in a cloth sack that moves on it's own. Something is wrong ... When Ryo finally takes her away for a romantic weekend, she reveals scars on her leg from some sort of past "accident". The morning after they make love, she disappears.

Ryo returns home, but Asami is in fact, waiting for him. Thus begins one of the most tortuous, disturbing scenes I've witnessed in quite a while. There's not much that can make me wince on the small or big screen, but the climax of "Audition" is certainly one of them. What's starts as an oddball romance transmogrifies into a hideous reflection on child abuse, pain and torture. Will anyone survive?

Technically, the film is adequate, but special effects - except for some expert gore - are not the issue here. Direction and acting are adequate, particularly the girl playing Asami - who essays the role with a quiet, serene surface, but convinces us there's a psychotic interior going on. The actor playing Ryo makes us feel his plight towards the end, and engages our sympathy for the monstrous goings-on. No complaints on the acting front.

I usually reveal a lot more about plotlines (sometimes too much) but I can't do it this time - it's really that important that you're not aware of what's to come. Director Takashi Miike has crafted a cunning journey that turns itself upside down towards the end, even though it's given us clues as to where it's heading. I can't say I love this film, but I certainly appreciate it's power to haunt and digust. Even horror fans may find the last "act" disturbing. I wouldn't recommend this one if you're into horror-lite - you'll need a strong stomach, but if you can subject yourself to it, you'll come away with a lot to think about relationships, miscommunication, the miseries of child abuse and the total mystery of another person.

Not much fun, but a viewing challenge.