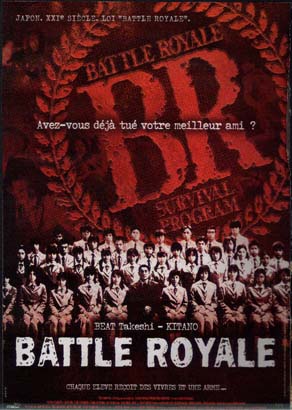 Your old Uncle Boris is going through a bit of a Japanese film fetish at the moment, after buying the excellent movie book "Eros in Hell", which details hundreds of bizarre Japanese sex, violence and downright insane films. Not that I found this film in there, but you kind of get the picture. I'll be covering more Japanese gems in future, but let's start with this little exercise in glorious cinematic carnage.

I won't go into copious character names because the cast is pretty big, and damn hard to keep track of. Here's a rundown on the plot, though. It's the future in Japan, and the country is in collapse. School children are openly rebellious, and in a panic to placate the masses and to enforce discipline through fear, the BR Act (Battle Royale) is passed. Every year, a class is drugged, taken from school to an isolated island, given a random weapon and supplies, and told to kill each other. After three days, if there is not one survivor, they all die, killed by an explosive collar around their neck. Sounds like fun?

We are introduced to a sympathetic couple, Noriko and Shougo, as they take a school trip on the bus. They all seem about seventeen. Soon, they are all unconscious as the drug takes effect, and they awaken at the Battle Royale compound on the island. Their teacher (Tatsuya Fujiwara) explains their situation, and kills one of the girls to demonstrate the seriousness of the "game". After watching a ridiculous, comedic training video, they all flee into the wilderness with their packs and weapons. Two of the contestants are ring-ins, and one of them proves to be a friend of Noriko and Shougo, while the other, a completely insane killer, revels in the massacre and becomes the greatest threat. Even without the threat of others, the ever-expanding "danger zones" loom as a killer, though the film never makes it clear what happens in these zones.

We trace the deaths of all the students - and that means a lot of death as there's about forty five of them. We watch a subtitled countdown as each one dies, usually mown down by machine-gun fire but ocasionally killed with crossbows, axes to the head, knives to the throat and even poison amongst a group of girls. One couple commit suicide rather than play the game, others revel in it, and their true evil sides come out. Others are so desperate to survive they are willing to kill first. Sounds a bit like life, doesn't it?

In a sub-plot, we learn that the Teacher is in love with Noriko, who seems to be called ugly by a few of the other girl students, but she looks perfectly fine to me. All this comes at the end though, as one of the ring-in contestants reveals his true reason for being on the Island - to understand his experience of surviving the last year's Battle Royale. As the student numbers dwindle, could it be possible that these three friends will survive and escape? Will the lovesick Teacher play any part in it all?

If you have a liking for extreme cinema, I suggest you take a look at this one. The blood flows, for sure, they went through a lot of "squibs" to achieve all the gunshots! I find it hard to be offended by the situation depicted, as it's all so patently ridiculous. However, Battle Royale does seem to capture the cruelty and desperation of adolescence quite well. Cliques still form on the island, romances form and fall apart, idle cruelty reigns supreme. Shougo's father has committed suicide in a flashback, feeling utter failure, even while he urges Shougo to succeed in life. Even though parts of the movie had me laughing with the insane violence on display - though there's no protracted cruelty, I must add - there is an aftertaste of sadness as well. The film ends on an ambiguous note for our protagonists, but given the situation beforehand, it all makes sense.

Director Kinji Fukasaku has made a technically adroit film, beautifully muted colours throughout, and reasonably earnest performances from the young actors. The music left me cold, being very bombastic classical all through where subtlety could have been used - or even a thumping rock track at other times. A minor quibble though.

This one left me with mixed feelings, folks, but worth a look if you like the Japanese take on action and exploitation. If you like a bit of art in your violence, definitely recommended.