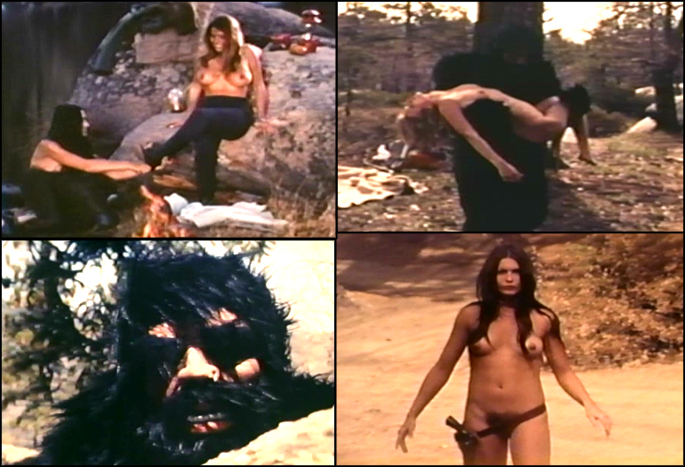 Also known as: The Beast and the Vixens

This is one odd little film. I'm sure it will turn up with a decent DVD release one day, as it contains all the ingredients a true afficionado of cult cinema will enjoy, but I'm not exactly sure who would have watched this circa 1974, or where it would have played. If anyone has any clues or even remembers it being around - and where - back then, drop me a line. Anyway, for fans of Russ Meyer mainstay Uschi Digard, you get to not only see her naked a few times, but talk at length as well, with her thick Swedish accent. It's not an unappealing experience and she doesn't sink the film, though I can understand directors not wanting her European tones coming through in your average American film. As far as The Beauties and the Beast itself is concerned, I'm a little hazy as to it's genre other than sexploitation, as there's no real horror, comedy or ongoing thrills to speak of. 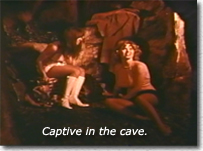 Our film opens with a middle-aged narrator crouching in the bushes and telling us about the legend of the Yeti, and it's various sightings in the Himalayas. Eventually, after ages on the Yeti - accompanied by shots of newspaper headlines - we finally get on to the Sasquatch, or Bigfoot, of the United States. He states that the story we are about to see could be true. Well, I guess ... We see our Bigfoot for tonight rising out of some twigs and sticks. It's not a great costume, with a completely immobile mask, but at least he's able to convey a large size. As he looks on in the forest, a young woman rows her boat in from a river and suns herself topless on the ground. Bigfoot immediately pounces on her and carries her away. Later, he throws a new abducted woman into a partially furnished cave - which is odd in itself - and walls her in with sticks and bits of tree. Later, he throws yet another frightened woman in. The other woman tells her that Bigfoot doesn't actually do anything to them, and leaves them food and drink. She also tells her that an earlier woman managed to get out while the creature's back was turned, so there is some small hope for freedom for the pair. We also meet a sleazy-looking guy talking on a public phone, sealing some sort of deal with an obviously criminal accomplice. 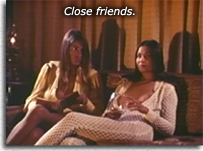 Now we meet our main protagonists. Uschi, playing a character called Mary, is up in the same forest in a holiday shack with her female friend. Now, barely anyone seems to have a name in this film, so I won't bother trying to name characters or tell you about the actors. The two women are waiting for their boyfriends to show up and are getting the house ready and spending the night there. Mary seems to be afraid of the wildlife around the house. We see Bigfoot peeking through a window at them. Mary's friend is becoming amorous - of course - after sharing some cognac - and leaves for the double bed they're going to share. Mary joins her later and they eventually get naked together. No funny business though, the camera cuts away. The next day, a couple stop their car and have sex in the woods, but Bigfoot spots them and, in a state of excitation, chases the man away, to abduct the naked woman. The guy steals the scene for his version of scared - which is flapping his arms around wildly and screaming to the high heavens as he tears off naked. The creatures lumbers off with the nude woman in his arms and later places her on the ground, unconscious. He feels her breasts but appears confused, going no further as the scene ends. The Beauties and the Beast is a film shy of becoming a monster-rape type of film, like some sort of Humanoids from the Deep of the seventies. This is probably because there is something of the heroic role later in the film for our shaggy friend to play. 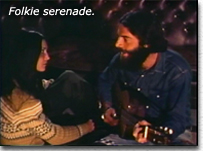 Mary and her gal-pal run into some hippies living a communal life in an abandoned house in the woods. They go skinny-dipping with one of the bearded mountain-men. Later, much to his girlfriend's annoyance, one of the hippies sings Mary's friend a folksy love-song. Later she has a surreal dream about having a gunfight with her - with both of them in the nude but for their cowboy boots and gunbelts! This must be one of the oddest scenes in the annals of exploitation cinema, and is quite possibly the best reason to track down this film. The hippy-girl wakes with a jolt from this nightmare - for her, anyway - and commands her boyfriend to affirm their love, and make love to her. He complies, in what becomes quite an intense and passionate sex-scene. When they all eat later, he tells them about how someone is lurking out in the woods, and in exchange for food is leaving them amazing old silver coins. The hippy-girls says she's seen a monster out there in the woods, not a man, but the rest just scoff at her claims. Mary's friend says it's probably an old hermit they've seen near their place - she saw a small man who walks with a stick. 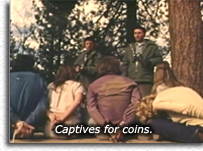 The hoods we encountered earlier rejoin the film. Their plan is to raid the hippies for the silver coins they know they're hoarding. They approach them in the forest and after some pretence of being normal, become aggressive and tie the hippies up, along with Mary and her friend. One of them, the brains of the team, forces Mary and her pal to take him to the hermit's place so he can get even more of the precious coins. Mary breaks away and runs off. The hood takes Mary's friend to the old hermit's shack, and ties her to a post as the old man comes out. He begins to attack him, but who should turn up but our good friend, Bigfoot! We hadn't seen him in a while. Bigfoot bear-hugs the thug to death, before he can harm the old fellow any more. We cut back to the other, more simple-minded criminal as he's trying to rape one of the girls. He's ripped her clothes off as she lays there, tied up and whimpering, but Mary comes back and distracts him with his now-dead friend's gun. The almost-rape-victim manages to get a revolver and empties it's barrel into him, almost crazed with a lust for revenge. The film briefly veers into Russ Meyer territory her and the violence is quite well-staged and exciting. We then see Bigfoot being guided away by the old man. They seem to know each other, and are probably friends, of sorts, in this lonely existence in the woods. Mary and her friend bid goodbye to the forest-folk after their adventure, and head home. 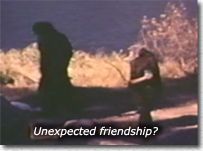 I guess if a film's main intention is to show as many nudie-bits as possible, as well as some softcore sex-scenes, you can forgive some narrative vacuums here and there. Still, Mary and her girlfriend's male partners never seem to show up, and they appear to not care one bit. They're just forgotten. The women tossed into the cave at the start, are never seen again! Who knows if they ever escape? As directed by Marius Mazmanian and Ray Nadeau, The Beauties and the Beast is pretty rough-and-ready film-making. There's quite a few non-synchronous sound scenes, and the variable music on the soundtrack's obviously straight from the film library. Jump cuts and ragged edits abound, the effect being quite jarring at times. Still, none of this is to say that this film is not entertaining. As mentioned earlier, it's quite nice to see Ms. Digard playing an actual character with lines, as well as flaunting her obvious assets. I didn't mind the Halloween Bigfoot costume, the actor inside seems to be having a good time scurrying about the countryside. This is no slow, lumbering Sasquatch, this creature can run!

The actresses are all attractive, and everyone concerned seem to be enjoying their roles, which helps the time watching this pass nicely. The two villains are almost pantomime-level with their sneering nastiness, yet the film never quite becomes an intentional comedy. Despite it's thrown-together quality, the elements thrown into The Beauties and the Beast are all quite appealing. Bigfoot, nude women, sex, dreamy hippies and a smidge of action-violence. It's hard to go wrong really, isn't it? Perhaps it could have gone further with any of it's exploitative elements, but there's something about this one that's quite charming. I can only imagine that the presence of the iconic Uschi Digard alone will - hopefully - guarantee a decent DVD release in the not-too-distant future.