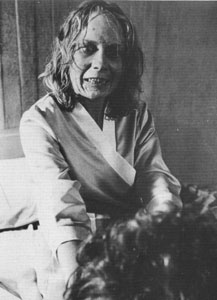 I'm always a sucker for an Exorcist rip-off. Abby was a lot of fun despite the flaws, and this one definitely falls into the category of enjoyment. I've read a few reviews here and there, attacking it as one of the worst films ever made. Well, if these critics are reading, now come on! Haven't you shmucks seen Batman and Robin or Battlefield Earth yet? Jesus H. Christ! Anyway, enough ranting. Let's get on with things, I'm getting hot under my demon-vomit-stained collar!

This one, also known as Beyond the Door, Chi Sei? and The Devil Within Her, despite the criticisms, actually has quite a bit going for it. I guess you need to be into schlocky drive-in cinema, but we're off to a fine start with it being an Italian horror film from the seventies. It's got a great music score, incorporating some decent funk as one of the main characters is a music producer. But let's get to that later. We'll do some plot first.

First, we're introduced to Dimitri, a Satanist (Richard Johnson of Zombie Flesheaters fame) who makes a deal with a demon, maybe Satan, for a few more years of extra life when his car goes off a cliff. The deal is to find her, and make sure the baby is born - whatever that means. The shot freezes as we jump to the present day. Jessica Barrett (The Nanny and the Professor's Juliet Mills, of all people!) wife of Robert Barrett, a music producer (Gabriele Lavia) is pregnant with her third child.

It's a troubling pregnancy, though, and Jessica is irrationally feeling that the child wants to destroy her. She becomes withdrawn from her two children, distant and even violent, smashing her husband's aquarium. She thinks about Dimitri, although what we are told is confusing. It's never clear whether as lovers they spent one night together, or years. Nonetheless, it soon becomes evident to doctors that the foetus is growing at an incredible rate. She will give birth in a few months. Her mind deteriorates further as she visits the doctor at one point, saying she wants to terminate the pregnancy, then speaking in a male voice and saying the baby will be born at all costs. She eats a rotting banana peel off the ground as she leaves the surgery. It's getting weird, folks. At home the children's room is filled with demonic, glowing-eyed toys and chairs that rock themselves. Oh, and what seems to be a minor earthquake as well. Not that any adults seem to notice!

Jessica's daughter finds her mother sleeping on her face, soon after this supernatural occurence and sure enough, mother's face is turning fully around to leer at her - but her body isn't turning with her. Soon enough, it's an all-out demonic possession scenario. As Robert encounters Dimitri - who's been following him - the Satanist, with his uncanny knowledge of the situation, seems to be the only one who can help. Jessica is given brain-wave tests only to find no brain activity. As soon as Robert allows Dimitri to enter the family home, we get the full terrifying sound effects, foul language, the vomiting of green slime and levitation. Sure, it's a carbon-copy of the original film in this respect, but it's all so well-filmed and lit that I was still impressed and, given my Achilles heel for exorcist-type films, a bit scared. Yes, your poor old Uncle Boris can still be unsettled - just a little bit!

As the Demon-Jessica howls at Dimitri to pound the baby out of her - after all, it will be his body and his spirit will reside in it as part of the Satanic deal for new life, we are faced with the demon's final betrayal. Will Dimitri even be allowed to live a new life at all? Will the baby be allowed to live? Will the family survive in one piece? Sorry folks, but I can't wreck the ending for you.

We've got a well-made and acted entertainment here, Richard Johnson conveys the pain of desperately seeking more life (under the pretence of helping Robert and Jessica) and Juliet Mills can look angelic as the normal Jessica, then completely evil and depraved when in her demon-possession persona. There's one great scene when, bound in a straightjacket, she quietly pleads for help from her husband then, as soon as he's lured into freeing her, all hell breaks loose and the demon takes hold. Again, the manifestations of the possession have all been done before, that is, Robert being thrown around the room while Jessica shrieks with witch-like laughter, but here it's all done well. That's what makes it compelling.

Well readers, should you go out and hire this film? If you enjoy a good demonic possession film, then definitely make the trip. It's polished, it's seventies, it's Italian. For some of you, that will be more than enough. But, if this ain't your green-vomit-bag, baby, just keep on looking through those video shelves!