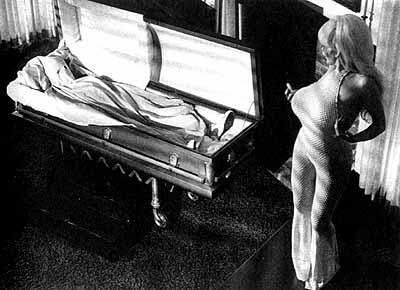 Beneath the Valley of the Ultra-Vixens (1979)

As far as this old film-fanatic is concerned, you just can't go wrong with a Russ Meyer film. They have just about everything that a cult movie-lover could want, and more. From a very basic, male standpoint you've got the heaving, voluptuous flesh on display, and any breast-lover will be in Heaven with a Meyer film. Dig a little deeper and you've got the distinctive, and often bizarre dialogue, the vicious violence, the frenetic editing and the luminous photography. Any Meyer film is a totally unique filmic experience, and I really recommend them to those looking for a cinema a few side-steps away from the mainstream.

Introductory praise over and done, I actually didn't really like this particular opus the first time I saw it, quite a number of years ago. The actors seemed ugly, the whole plot was less compelling, more basic porno-level and there seemed to be a desperate edge to the more extreme sexual activity and imagery. Viewing it for review purposes this time shed a different, and much more positive light over the Ultra-Vixens. The proceedings approached what was (virtually) a pornographic cartoon, with every ridiculous element in place. Let's get into some story, and get the old ball rolling.

It's the all-American town of "Smalltown", and our unnamed Narrator (Stuart Lancaster), whom we will have a lot to do with, tells us all about American life in, well, a small town. Nazi-fetishist Martin Borman (Henry Rowland) is listening to "Heil Hitler Dier" on an old record player and getting sexually worked up, as enormously voluptuous radio evangelist Eufaula Roop (Ann Marie) plays the old electronic game of "Pong" on television. Those were the days of Pong, eh? Anyway, Borman gets even more excited and crawls into a handy coffin. Placing a white sheet with eye-holes cut in it over himself, Borman becomes erect as Eufaula sheds her clothes, spouts all sorts of evangelical nonsense, and the two have sex. We then meet the equally enormously voluptuous Lavonia and husband Lamar Shedd. Lavononia, as played by Russ Meyer mainstay Francesca "Kitten" Natividad, is frustrated by her husband's unwillingness to have sex with her. As she lies restless in bed, attempting to pleasure herself with a dildo, Lamar relents after she tries to pleasure him orally. The trouble is, Lamar can only have anal sex, which he proceeds to do forcefully, much to Lavonia's anger, and earns himself a swift kick in the testicles. Lamar recovers as he listens to Eufaula Roop's soothing, but nonsensical sermon over the radio.

Lavonia, as our ubiquitous narrator reveals, find her sexual fulfillment with all sorts of strange men. With fourteen year old boys, lingerie salesmen, dump-truck owners, anyone, basically. Stimulated by the lingerie she buys, she even adopts the persona of a Mexican stripper called Lola Langusta, and works out some of her fantasies in a cheap strip- club.The low-IQ Lamar, meanwhile, works at the local junkyard under "Junkyard Sal", played by June Mack, another top-heavy and this time black actress who is one of the weirdest-looking people I've ever seen. She has the widest head or cheekbones I've witnessed in many a day. Anyway, Sal forces Lamar to do "overtime", that is, have sex with her, but she has to put up with his back-door shenanigans. Her moronic, white-trash helpers spy on them through the window and end up getting beaten up by Lamar for their troubles, but Lamar is also kicked out by the enraged Sal.

Seeking succour, Lamar ends up the selfsame strip club where "Lola Langusta" works. You need to see Lola's dancing, my little lovelies, it's got to be seen to be believed. I don't know if I'd call it erotic but it's certainly enthusiastic! Lavonia recognizes Lamar in the crowd, but the dim-bulb husband can't recognise his own wife, even though she's only wearing a wig. Lola/Lavonia drugs Lamar's beer, takes him to a room and while he's in a catatonic stupour, slips a black sock over his penis. She then proceeds to have her way with him in wild Natividad style. Our Narrator frantically drills a hole in the wall and watches. Once he begins to awake she convinces him - in Spanish - that her husband is due back soon, and he runs home. Lamar catches the insatiable Lavonia in bed with yet another man, and after she boots the man out, they decide to get couples counselling with the local dentist/marriage counsellor, Asa Lavender (Robert Pearson) who ends up being an outrageously camp, stereotyped queen. He also works with a nymphomaniac nurse named Flovilla Hatch (Sharon Hill) who seduces Lavonia with a giant, double-ended dildo-for-two as Lavender, screaming obscenities, tries to force Lamar out of the cupboard whe he hides. At one point, with a chainsaw! Finally, Lamar knocks Lavender down and the two escape the sexual depravity.

Just as Lamar is about to give up, they drive past Eufaula Roop's desert radio station. Hearing that healing voice again, Lamar has a feeling his last chance is upon him. Dropping his pants, he presents his suffering penis to Eufaula, who quickly finishes her sermon in order to attend to him. Pushing him into a bath to cleanse him, the two have frenzied sex as Lamar is born again as a man who "can look a good fuck in the eye!" Indeed. Finally, Lamar finds Lavonia in bed with the truck-driver again, but this time boots him out in order to please his long-neglected wife. As the two find wild sexual happiness, our Narrator finds his teenage son in bed with his Austrian wife Supersoul (the inimitable Uschi Digard) and boots him out as well. We close the film with the director Russ Meyer (or R.M. as he's referred to by Stuart Lancaster) suddenly appearing in the desert, talking about Kitten Natividad and the new film he's going to make, Jaws of Vixen. What a pity this film never eventuated!

Basically Meyer's last film, the director seems to be putting his all into making this the ultimate softcore sex-film, just a few steps short of pornography. We get to see excited penises leaking seminal fluid, the sex scenes go on forever, and are incredibly wild and uninhibited. I could almost believe that Kitten Natividad is a real-life nymphomaniac. Roger Ebert and Meyer's dialogue is as strange as usual and almost Shakespearean at times, mainly from the Narrator. The main cast of characters are all moronic, jug-blowing hick-types. If you view this one like, as I mentioned earlier, a sort of live-action sex cartoon with living Li'l Abner characters, it becomes much easier to appreciate. There are still the odd stylistic touches that Meyer injects, like focussing on the swivelling wheel of a bed as a couple have sex, or the smashed glass of a lamp that Lavonia chases off one of her lovers with. It was nice that the film ended with its creator appearing, even if he's gabbing about a film he never got around to making. It's a surreal note, but fun to watch all the same.

I have a new appreciation for this ridiculous, imaginative, obscene and exciting piece of film-making. Given that there will never be another film-maker like the late Russ, these vibrant old cinematic treasures are well worth having in any cineaste's collection.