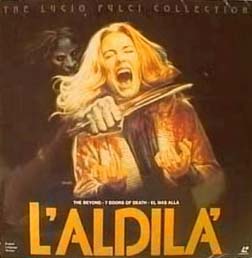 Feel like some gore? Feel like some atmosphere? Take a leap into "The Beyond", with Italian auteur Lucio Fulci, then. Make sure you've got a strong stomach, though. This is extreme viewing.

A lot of people don't like Mr. Fulci's films. I've heard it said he just sticks a camera in front of makeup effects and gore. Oh well, what can a poor director do? Bring it on, Lewie. There's more to you than just splatter. "The Beyond" is seen as Fulci's best work and makes a lot of horror top lists. Is it any good? I caught a censored version the other night and even that seemed to have slipped a lot through. I'm looking forward to seeing an uncut DVD one day.

It's a pretty basic storyline. Modern woman in Louisiana inherits an old hotel that just happens to be the site of one of the seven gateways of Hell. A plumber beginning her renovations unwittingly unleashes the original owner, a warlock executed by a vicious mob decades ago. The undead are unleashed to roam the house and the city. The heroine and her friend end up trapped in Hell forever.

Okay, that was a summary. Let's look at some of the setpieces. The warlock is executed by the mob in the sepia-toned opening scene. He's beaten with chains, nailed to a wall and has acid thrown in his face. Apart from that, everyone gets on really well!

Other scenes include the plumber having his eyes pushed out of the sides of his head, by the reanimated warlock. A girl's throat is torn out by her bewitched guide dog. She seems to lose an ear as well. Hordes of spiders attack a man and take bites out of him. Bloody bites. The top of a girl's head is blown off by the hero, no less! Well, she was supposed to be evil. Two faces are dissolved by acid into melting, streaming messes. So, you're probably getting the picture now.

But Fulci films aren't just splatterthons. There's great, carefully thought out camerawork and setups. The music's quite effective in a "mediterranean horror" sort of way. The acting's passable for this sort of thing, but it ain't Shakespeare. Hey, I ain't lookin' for perfect thespianism when I rent a Fulci. I want full-on horror. And that's just what you get when you dive into this bloody little pool. Zombie-lovers should definitely take a look.