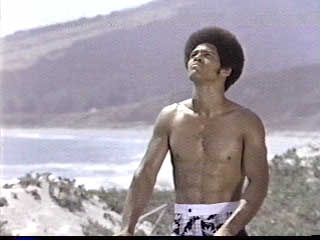 Sorry, I can't stop humming the theme tune as I tap away here ...

Well, brothas and sistahs, Director Robert Clouse - he of Enter of the Dragon fame - has put together a nice little cross between the Kung Fu actioner and the Blaxploitation flick. Now folks, these are two of my favorite genres so it's little wonder the film ended up in these pages. I'll see if I can sell it to you.

Jim Kelly was in Enter the Dragon and possibly met an untimely end. He's centre-stage here, though, and obviously loving it. A lot of his moves and battle whoops are very Bruce Lee, but I couldn't give a rodent's posterior. It's all good fun. This film has a comic tone at times, and none of the violence gets overly serious.

Under pressure from the Mafia, ghetto crook Pinky (Malik Carter) leans on the owner of a building which houses a Kung Fu School, Pop Byrd (the inimitable Scatman Crothers, here with hair). The mob wants the building to get the monopoly on a civic project. When Pinky's thugs lean too hard, Pop dies. This is one of the few films I've seen when a good old-fashioned punch to the jaw can kill someone. Oh well, I suppose it's possible.

This leaves the building in the hands of his estranged daughter, Sydney (Gloria Hendry). Gloria is an expert at Kung Fu, and along with Black Belt Jones, who was a friend of Pop's, they take on hordes of both ghetto gangstas and mob heavies. There's so many fight scenes I lose track of them all, but a highlight is a suds-filled melee at a car-wash. It's enough to say that they're all bloodless, fun and of course, everytime a blow connects there's the classic sound of two planks of wood hitting each other. As you'd expect, when twenty guys are trying to take Black Belt down, they each wait their turn as another heavy gets kicked in the moosh. Still, whatcha gonna do?

The soundtrack is classic seventies funk, so of course Uncle Boris was in Heaven. It seems a much lower budget film than Enter the Dragon but still made with some care. The acting is what you'd expect for this type of piece, we don't really expect or need Brando levels of intensity. Just line 'em up and knock 'em down. Jim Kelly is an appealing action hero, and certainly makes the most of his screen time. Script wise, there's some classic comic lines - Pop's woman gets so mad at one point she threatens to "slap the black off him!". Now c'mon, you gotta laugh at that!

If I had a criticism, and it would only be because I'm a pervert, is that Black Belt Jones could do with a bit more sex or sleaze. I can appreciate though, that because of it's pretty light nature it can be appreciated by younger audiences, and could make a good introduction to the wonderful world of Blaxploitation to faint-hearted viewers!