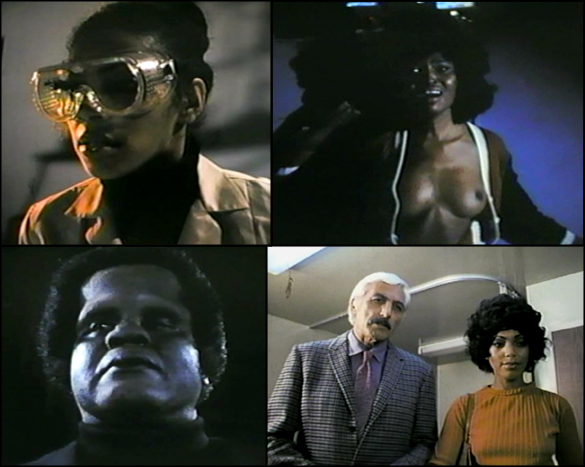 I'm not a big one for putting the 'bad' label on any film. Most films have some redeeming qualities. I am a big one for blaxploitation cinema, though. Not only do we have classics like Coffy, Superfly and Foxy Brown, but the genre also produced a thriving horror scene as well. Show me Blacula or Sugar Hill and I'm in blaxploitation-horror heaven. Perhap then, when things don't go quite right, it's a bit more humane to refer to missed opportunities. Blackenstein: The Black Frankenstein - that's the actual title as the film begins - is quite a lot of fun most of the time, despite a few passages of tedium. Still, with a theme as rich as the Frankenstein mythos, all manner of classic film could have been accomplished on a low budget. Just look at Blacula. Actor William Marshall brings fantastic acting chops in essaying the role of the of the vampiric anti-hero, and a memorable film is born. It's the acting and script which lets us down to some degree in Blackenstein, but let's see if we can get a balanced take on our square-headed friend. 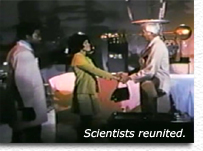 Doctor Winifred Walker (Ivory Stone) visits her old teacher, the debonair Doctor Stein (John Hart) in his grandiose castle, sitting somewhere in Los Angeles! She's greeted by the vaguely sinister servant Malcomb (Roosevelt Jackson) and shown to meet her old mentor. Stein greets her warmly and shows her around his laboratory, which of course in a Frankenstein-type film, is stocked with the classic electrical equipment created by Kenneth Strickfaden for the old Universal films. Stein has perfected a new type of DNA therapy - not bad for 1973 - that allows him to do wonderous medical things, like fuse viable legs and arms to amputees and also provides a youthful effect on old people. Stein shows Winifred one patient, Bruno, who has new legs grafted on his stumps. Having used an earlier version of his serum, one of Bruno's legs is striped like a zebra! According to Stein, it's some sort of throwback effect that's been fixed in later serums. Winifred also meets Eleanor, a ninety year old woman who looks sixty thanks to the DNA treatment, of which both patients need daily doses. 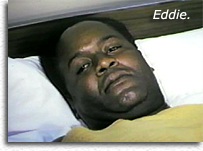 It turns out Winifred has personal reasons for visiting Stein. Eddie Turner, her once fiancee, had his arms and legs blown off in the Vietnam war, and is now languishing in the local veteran's hospital. She implores Stein to help and to become his assistant, and Stein agrees without hesitation. We then meet Eddie in the hospital, as played by Joe De Sue. Eddie's being verbally abused by a cruel male nurse (Bob Brophy) who's bitter about not being allowed into the army due to a heart murmur. This rant by Brophy needs to be seen to be believed, as it's hard to comprehend anyone being accepted as a nurse going on to call a depressed double-amputee a 'creep' with 'stupid eyes'! Eventually this hail of abuse is interrupted by Winifred and Stein, who visit this poor guy. Initially Eddie wants none of it - and none of Winifred, as he's trying to allow her to go on and lead a happy life - but is eventually convinced by her to try Stein's treatment.

Eddie arrives at the 'castle' and the treatments begin. First, some DNA injections. We all know something's going to go wrong and it does, in the form of Malcomb. The Doctor's servant has fallen in love with Winifred, and tells her his feelings in an awkward scene. She trys to tell him she's grateful and just wants to be friends. We can tell by his sickly smile that he's hardly accepted her rejection. Later, in the lab, he mixes all sorts of incorrect chemicals into Eddies DNA serum, intent on his twisted revenge. The operation proceeds though, with much electrical zapping and humming. We're not sure where Stein gets his new limbs from, whether it's corpses or he grows them somehow, but it seems Eddie's new limbs need an electrical charge pumped through them to activate them. All seems well at first, and we hear that off-screen Eddie is walking fine with a walking frame, and will soon stroll around unassisted. After a few days though, Eddie lies inert in bed and complains that he 'just doesn't feel right'. The two doctors notice his brow is starting to jut out, Frankenstein-like. Eventually he becomes catatonic and they place him in a convenient dungeon-like room while they try to work out what's gone wrong. That night, the fully Frankensteinized Eddie, complete with afro, Frankie-suit and ankle-boots, rises and lumbers out, very slowly, through the laboratory. Making grunting noises, he returns to the veteran's hospital as the wind howls in the street. He finds his victimizer, our friend Mister Brophy, promptly strangles him and rips his arm off. 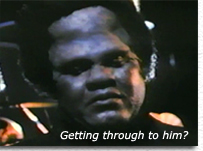 'Blackenstein' then goes on to attack a middle aged couple after they go to investigate their dog's barking. Eddie kills them all, in gruesome Herschell Gordon Lewis fashion as he pulls out the woman's intestines. The monster retains a homing instinct though, returning to his quarters at the castle. The next night, as Winifred sleeps exhausted in the lab, Eddie goes on a nocturnal hunt again and drags a woman in a park away, to kill her offscreen. He then attacks Doctor Stein as he visits him in his 'cage'. Two police investigate the murders happening in the area and interview Stein, but he's as ignorant of Eddie's nocturnal rampages as them so they leave, none the wiser. How Stein and Winifred wouldn't know about Eddie's little expeditions is beyond me, but we'll have to let that go. We then view a fairly unfunny comedy routine in a nightclub with some brothers, accompanied by an uninspiring soul singer. This scene goes on for a while, the outcome of which is the comedian sees the monster kills another, this time topless, woman and pull her intestines out. He tries to tell the cops about what he sees but they can barely believe him. The creature returns home to find Malcomb attempting to rape Winifred. He attacks the sinister servant and though Malcomb tries to shoot him, the bullets do nothing and Eddie kills him. He then goes on to kill a crazed Bruno and Eleanor. The creature then runs into Winifred again, moves to attack her, but her pleas make him back off. She seems to get through to him for a few seconds, but Stein turns up and Eddie attacks him - seemingly killing the doctor offscreen but we're not really sure. The monster lumbers off again, abducts another hapless woman and heads for a warehouse. She manages to escape for a few minutes before trying to climb a ladder and being caught by Eddie and killed in his inimitable, bloody manner. The police finally catch up to the black Frankenstein and release the 'Los Angeles County Canine Corps' - a snarling pack of dobermans - on him! Can poor old Eddie survive this biting, snapping attack and remain intact, to shuffle another day? 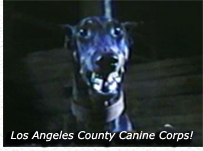 So, what was the big, missed opportunity with Blackenstein? Let's look at some of the minor problems with the film, first. The soundtrack is obviously trying to evoke the Universal horror films with its orchestral bombast, but really just comes off as irritating. I would have much preferred a funky, soul-ridden Blaxploitation score, of which we don't even come close. Director William A Levy has made a rough-and-ready film, with some jarring edits and cheap production values, but that never spoiled cinema for me. Yes, Ivory Stone's hairstyle changes from scene to scene - no problem. The acting's pretty basic, again not a problem. We just need people capable enough to carry the simple story through. Eddie's Blackenstein makeup and look is clearly meant to evoke Karloff with a soul brother feel as well. I can deal with that. It doesn't really make sense that Winifred and Stein don't catch on that Eddie is leaving his cell each night, stumbling out and killing folks. But here's the clincher. With a character as rich as Frankenstein, why not get some meat out of the story? Even before his transformation, Joe De Sue as Eddie is virtually catatonic, possibly understandable if you've had all your limbs blown off by a land mine. I suspect it's his acting skills, though. We never get to see his joy at first regaining his limbs or walking before his change to monster - we just hear about it happening offscreen. Once he's monsterized, Eddie has absolutely no facial expression, just shuffles forward very slowly, and we don't even get to see him properly until the last few scenes. Before that, he's lit so badly we mainly see him in complete shadow. It would have been nice if he could have shown some emotion, some awareness of his horrible fate. That he'd regained his limbs, but the cost was this horrible disfigurement. On the soundtrack we hear this constant heartbeat along with grunting and wheezing, although he never looks like he's making any noise. I can understand his slowness what with new, unfamiliar legs and all, but are we meant to believe this stiff creature can catch able-bodied humans and hold on to them, let alone kill them?

All this said, there's something quite fun about Blackenstein. I just wished it was a more 'pure' blaxploitation film with all the trappings, rather than a horror knock-off that just happens to have black people in it. Again, Blacula and it's ilk pull this off much better. Can you imagine an actor of the calibre of William Marshall playing the part and getting some real gravitas into it? This is assuming the script allowed it. Never mind, though. You've got the laboratory scenes, oddball gore and occassional nudie-bits. Perhaps Blackenstein succeeds more as an cheap little exploitation film than a blaxploitation film, if that makes any sense. Since we won't ever see the blaxploitation-horror subgenre rise from the tomb again, we just have to be accepting of and take what the era produced. I think in the right frame of mind, most fans of offbeat cinema will get something out of it.