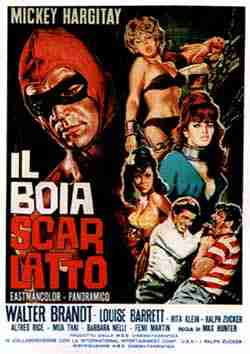 Good old Mickey Hargitay. He's in so many movies I love, it's ridiculous. He's in gems like The Reincarnation of Isabel, Lady Frankenstein and the yet-to-be-viewed-by-your-Uncle-Boris Delerium. He really found his career in Italian exploitation cinema and in this timeless classic, also know as The Crimson Executioner, he takes centre stage as a demonic (and very S-and-M looking) madman. Being from 1965 we don't get a lot of full-on nudity or graphic, splattering blood, but it's what hinted at that makes much of this film so enjoyable.

The prologue to the modern story shows the "Crimson Executioner" being executed himself in an Iron Maiden for crimes against humanity. As his blood seeps out through a gap in the spiked-coffin, he vows to return and seek his revenge. So we all know what's going to happen ...

Present day. Well, 1965 (and stylish Italian) present day. A group of models and photographers, plus a gruff publisher, looking for suitable locations, are lost in the countryside. Trying to take shelter in a seemingly abandoned, medieval castle, they are finally confronted by the strange owner, ex-actor Travis (Mickey). He spots one of the assistants as his ex-fiance Nancy (Rita Klein) and seemingly softens, briefly. They are allowed to stay the night - one night only. Travis's laughably-dressed assistants (they all wear tight-fitting cliche-frenchman's striped tops) show them to their rooms.

It's not too long before the trouble starts. The decadent party take photographs amongst all the ancient devices of torture. Soon though, one of the men die as a spiked pendulum breaks it's rope and falls on him. The next death is a model, this time purposefully shoved into the Iron Maiden. Now Travis, in his madness, fully adopts the persona of the long-dead Crimson Executioner. He had always hated the imperfection of people - now going off the deep end allows him to become his hero.

He's certainly a sight in his executioner outfit. Black eye-mask, red skull-cap, tight red pants and huge belt, capped off with a huge gold medallion against his trademark oiled-up pectorals. Hoo-boy! He traps one of the models in a wire spider-web which is rigged up to shoot arrows into any intruder - as our nominal hero Rick (Walter Brandi) finds out. It's too late for the model though, she's been brushed against by a poisonous and horrendously fake-looking spider. At least the spider is meant to be fake here, unlike in Nude for Satan! But that's another story.

Finally we descend into the bloody pit of horror. This is where Travis does his main torturing. It's pretty strong stuff for 1965, and also beautiful in it's pulp depictions. You'll have to see what I mean. Semi-clad women are turned on torture wheels as knives strip their clothing and gradually cut into them. Travis burns the publisher to death in a cage, then goes back to his two female captives, stretching them on a rack, water-torturing them and puring hot oil on them. Apart from that, they're having a good night. Then Travis grabs Nancy for his own vicious form of amusement. But Rick invades the pit, and finally tries to turn the tables on the crazed Travis. Travis takes to him with a chain. Who's going to prevail and who will remain in the pit forever?

This is a wonderful little Italian movie. It has a superb look to it, and is very well photographed with stunning medieval sets and colours. It's the soundtrack, though, that really popped my cork. I'd love to get a copy of it but, I'd doubt that it even exists. Gorgeous jazz, with wonderful, breathy female singing, winds its way throughout the entire film. A treat for the ears, I guarantee it.

Mr. Hargitay is suitably over the top as Travis, and seemingly delights in his role. He certainly gets to show off his body, as does just about everyone else, to some degree. I wouldn't call any of it great acting but hey, it services the film and its vibrant images. I'd really endorse this one to any lover of unusual film. Sure, it's violent and crass, and there'e quite a few unintentional laughs, but there's also a lot of painterly beauty in some scenes. With such great music accompanying them, how can you go wrong?