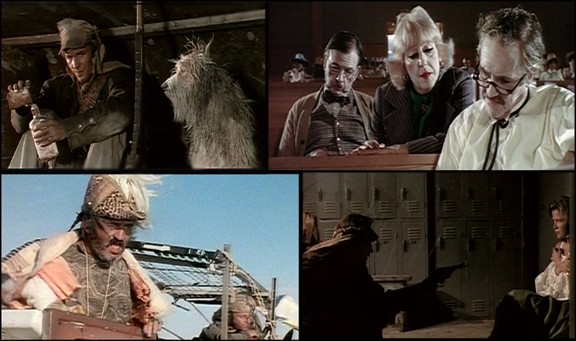 If you enjoy seventies Dystopean science fiction, you could do a lot worse than to catch this little post-atomic-holocaust story, A Boy and His Dog. I could hardly call myself a Don Johnson fan, but he's not bad as the titular 'boy', roaming the wasteland with a most unlikely canine friend. Are we talking hyper-kinetic car-crashes a la Mad Max? Radioactive mutants fighting embattled normal survivors? Not really. Director L.Q. Jones' adaptation of a Harlan Ellison novella is more a subtle semi-comedy for the most part, even if Johnson's character's only reason for being is to find food, and women to rape. There's not much blood, action or sleaze on display tonight, just a litte treat for the side of you that enjoys offbeat, quirky little science-fiction gems.

It's 2024 A.D. World War III has come and gone without destroying the world. Then World War IV did a much better job of it with nuclear weapons. Civilization has been utterly blown away, leaving a dusty, rubble-strewn mess. The remaining survivors fight amongst each other for food and resources, occasionally teaming up to dig for valuable items buried in the dust and mud that now covers the world. Vic (Johnson) is a loner in this bleak land, though he's a got a valuable friend that tags along with him - a dog called Blood. Blood, played by the Brady Bunch's 'Tiger' of all animal actors, is much more than just a simple mutt. Vic and Blood, perhaps through some sort of atomic mutation, can read each other's minds like you and I having an out-loud conversation. The funny part is, Vic's a pretty simple-minded fellow, but Blood is a frustrated, cynical intellectual (voiced by Tim McIntire) who seems to be with Vic just for the food. Nonetheless, Blood is constantly trying to teach Vic about the past and earth's nasty history, but Vic couldn't care less. The arrangement is simple. Blood, through his heightened canine senses, finds Vic women to rape. In exchange, Vic finds Blood food. This all works okay, but Blood also wants to take them both "Over the Hill", a supposedly better place where people actually farm things, and are a bit more organized than tha savage rabble they survive amongst.

When we first meet this odd pair, Blood has sniffed Vic out a woman in an underground shelter, but other survivors, known as 'Rovers' have gotten to her first, and slashed her practically to death after raping her. Amongst the dead, Vic and Blood argue about their sorry situation, with Blood constantly calling Vic 'Albert' for some reason. Maybe a sarcastic reference to Einstein? Later, after a storm has raged and stopped, Vic and Blood take shelter amongst a rat-infested, rubbish-strewn little camp where they're not under attack from the passive - though armed - campers. Blood keeps nagging about Over the Hill, and Vic finally relents: find me a broad (to rape) and we'll go over the hill. The next day, as the pair look on, a makeshift cart towed by a group of slaves turns up and starts digging for valuables. The chief of the survivors is a violent lunatic and keeps a minstrel on a leash, but Blood surmises he has a hold on the ragtag bunch through some sort of charisma. Vic spots the group digging up some food and manages to steal a bag of it, skipping off in delight as the two of them escape the rifles of the rovers. A mysterious unseen group of three men watch them run off and one says to the others that Vic may be 'the one'.

That night, Vic and Blood go to a makeshift cinema in the wasteland, Vic bartering with the armed ticket-man for entry. They trade some of the food for tickets. Watching some sort of bizarre porno-come-snuff movie beamed out by an old projector - perhaps filmed in this time by survivors - Blood senses a woman in the small audience. Vic can't see her so she must be in disguise. When the films are over, Blood traces the 'female' to a buried shelter where 'Screamers' - mad, dangerous, radioactive survivors from what I can surmise - take refuge. Vic is scared to go down into it to track his victim, but Blood's taunting drives him to press on and look for the woman. Eventually he spots a nude woman getting dressed in a locker-room and attacks her. Threatening her with a gun, he begins to force her to disrobe, but she confuses him by making conversation with him, before the rape can commence. Before anything else can happen, Blood turns up and tells them a pack of rovers has turned up and are surrounding the 'theatre'. The girl can't understand what's going on, as Vic seems to be talking to the dog. Blood tells him to give the girl to the rovers, but Vic wants to stand their ground, and face them off. Blood snarls at the girl, who tries to talk kindly to him. I really appreciate this scene as it shows the nasty side of Blood, who's hardly a waggy-tailed family pet.

As the rovers begin to attack, Vic shoots one and Blood mauls another. The dog grabs his victim's rifle and gives it to the girl. Blood suggests pretending to be screamers to frighten the rovers off. One of the rover's dogs attacks Blood and they have a vicious fight. Between the girl shooting at rovers, Vic fighting and shooting as well as killing the attack-dog, they eventually rout their attackers. As we see a green glow through the opening, the real screamers begin to show up, and the three of them take cover further below in the shelter. As the injured Blood waits annoyed, the three spend the night together with Vic and the girl, called Quilla June Holmes (Susanne Benton) having consensual sex over and over. In fact, she seduces him. The jealous Blood senses the coast is clear, and just wants to get out. Vic and Quilla June talk more, with Quilla June wanting Vic to come 'down under' with her, where a group of survivors live and have made a civilization, but not with Blood. Vic won't live without Blood, though. Later, Vic and Blood argue about Quilla June, who has upset the harmony between them. Vic tries to find Quilla June again, discovering her, only to have her knock him unconscious with a flashlight.

Against Blood's protestations, the angry Vic wants to track Quilla June down under. He leaves Blood up top, and they say goodbye until Vic gets back. Blood says he'll wait a little while, then leave for "Over the Hill". When Vic is out of sight, Blood says how much he'll miss him. As soon as Vic makes his way further down, he's captured by the people of Topeka, the city down under. They're a strange bunch, the Topekans, all wearing pancake makeup with rouge and bright red lipstick. A brass marching- band is the ever-present entertainment, walking around the underground parklands as codes by which to live are broadcast over loudspeakers. Topeka is run by a cold, ruthless committee who kill anyone not towing the line - which is called being 'sent to the farm'. Vic is forcibly bathed and offered the chance to impregnate thirty-five virgins, as Quilla June had been sent by this committee to lure the virile Vic down to them. As committee head Lou Craddock (played by venerable actor Jason Robards) says, they have all been underground too long, and all Topeka's men are now sterile. Every now and then, they need new blood brought down to them, and now Vic is that new blood. Vic is delighted but Quilla June is angry, as she is still denied entry into the committee, which is why she agreed to go on the 'mission' in the first place.

Vic is horrified to find himself hooked up to a semen-extracting machine instead of having sex with the virgins, although they do show up with their prospective husbands to collect their vials of sperm. Quilla June and her boyfriend Gary (Mike Rupert) free Vic, so that he can help her overthrow the dictactorship so that she, Gary and her rebels can rule. Vic wants none of it though, and he and Quilla June watch the uprising quelled by a human-looking robot called Michael, who breaks his victims' necks with one hand. Eventually, Vic shoots Michael enough so that he collapses in a shower of sparks. Quilla June begs to go up with Vic to the surface as Lou and the committee will never let her live. She tells him she loves him, and they escape to the wastelands above. They find the faithful Blood still waiting, barely alive, needing food desperately. Quilla June says the two of them need to leave without Blood, and he would go with her if he loves her. Vic faces a choice of life or death for one of them ...

Let's just say that choice is made with the typical humour that runs its way throughout A Boy and His Dog, and ends with something of a joke. Now, though rape, violence and impregnation are all themes predominant in this film we don't see any rapes, there are only brief flashes of nudity and just a smattering of blood and gunplay. This is more a literary sort of film with much black wit in the screenplay. Blood is still a victim in a way, with his skills being used only for Vic's self-gratification, so that he can survive this awful world. In the end we realize he exists at Vic's mercy. Still, they seem to share some sort of emotional bond, although Vic's obviously much less intelligent than the sardonic dog. As played by Tiger and McIntire, Blood's a well-rounded character, alternating between vicious and calm, even vain and insulted. Tiger is a great actor! Don Johnson's Vic is more-or-less just a vacuous foil for Blood, but doesn't spoil the film, and plays his own version of insulted quite well, against Blood's stinging barbs. Susanne Benton as Quilla June is an interesting presence and we can see, through her plain beauty, the hardness of an ambitious, virtually soulless Topekan in her performance.

Director L.Q. Jones has created an amazing vision of two worlds for us to feast our eyes on - the empty, panoramic wasteland of the surface, with it's half-buried cars, ramshackle camps and wreckage, along with endless stretches of sand and rubbish. Topeka is a surreal, sterile village with it's brass bands, speakers on trees and barbershop quartets. I'm not sure why a people would evolve to wear such bizarre makeup en masse, or particularly why living underground would make all human males sterile, but I can appreciate the absurdist touches and still enjoy the film. It clearly shows us that humanity has fallen apart, whether it's in rubble and wreckage or a sterile, warped underground world. You can see something of an inspiration for the Mad Max movies in this one, with the barbarian leader and his acolytes - who keeps his subordinate on a leash like one of the villains does in Mad Max 2, but this one, though having less iconic imagery, still leaves you with more to think about.

I'd recommend this one purely for it's oddness and unique approach to the post-nuclear-holocaust story. Nobody would try and remake the film these days without a gazillion dollar budget, massive CGI bombed-out cityscapes, mutants and wars, and ten times less of the charm. Sometimes charm wins out with cinema, and A Boy and his Dog is one of those times, leaving you with something to actually remember when the credits have finished rolling.