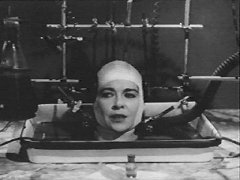 Also known as: The head that wouldn't die

God, I love this one. It's the sort of viewing experience that urged me to start this website. Behold, one of the wonderful times in an exploitation film where every element that could go awry, does. Here's the breakdown.

Plotwise, it's a gem. A mad doctor crashes his car (offscreen with a classic library car crash sound) while trying to drive to "trouble" up at his spooky country home. He's already proved to his doubting surgeon father that he can revive the dead with electricity and ... heart massage! Anyway, in the "horrendous" crash his fiancée is decapitated, her body burned to a crisp. So our resourceful doctor keeps her head alive, with his new head-reviving serum. There's also a Frankenstein-like "thing in the closet" and a deformed assistant for good measure. The rest of the film is the mad doctor's search for a suitable body to attach the (by now, hate-filled) head to, amongst the prostitutes and showgirls of sleaze city. At one point there's even an impromptu "catfight" between two showgirls competing for our heroe's attention. I tells ya, this film has everything!

I don't want to give too much else away, plot-wise. You really have to drink it all in for yourself. I'd like to delve into some of the qualities in this film that I love so much ...

Great look. There's lots of close-ups due to the low budget, and it's a nice black and white photography happening. The sound quality can be amusing - sometimes the badly recorded actors sound like they're talking down a rusty drainpipe. Thankfully only sometimes.

The script is a doozy. Head to "thing in the closet": "Can your horror match mine?", "The paths of experimentation twist and turn through mountains of miscalculations and often lose themselves in error and darkness! ", "who's going to make me blow if I don't want to?" ... I could go on and on. The acting is deadly serious - these guys are auditioning for Shakespeare in their spare time, I just know it. Although there's one scene - one of my favorites - where the mad doctor answers his assistant's question, about where he is going to find a body. He answers, barely able to contain his laughter: "There are ways (beautiful pause)... there are ways". Heaven.

For the time - 1959 - it's an horrendously gory film. The assistant's death scene, his one good arm ripped from it's socket by the "thing in the closet", goes on for about ten histrionic minutes. As he stumbles from room to room, moaning and wailing, he trails his bloody stump along every wall, leaving streaks of grue. Bliss for the exploitation fan.

The music's a must too. Sleazy jazz that shouldn't be played outside of smoke-filled strip joints, permeates the entire movie. You won't forget the main sax theme, I guarantee it.

Okay, humanoids. This was a long one. But I beg you to see this film! It's one of my absolute favorites. There's even a different title at the end than at the start. "The head that wouldn't die" closes the film!

You won't be the same after this one. Rent, buy, steal, whatever. But watch!