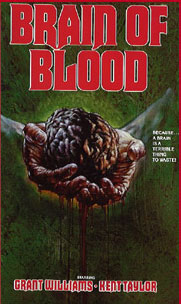 Also known as: The Creature's revenge

Take a look at Al Adamson's "Brain of blood" then, Sahib.

It took me ages to find this one, and then it was under another title, "The creature's revenge", from MoviesUnlimited - take a look at the links section if you want to see for yourself - but I'd read a lot about it. Mainly negative, by the way.

But, when I finally got a hold of it, it fit all the criteria you could want for an Adamson film. It's not as insanely delirious as Dracula versus Frankenstein - it lacks the ludicrous speeches, the mad cramming of genre elements, but hey, there's only one "Drac versus Frank."

In some ways, it's somewhat of a "serious" film for Adamson, with somewhat of a political message to be found in there, somewhere. People are exploited, people die, for monetary and political gain. Regina plays a more subdued, mercenary character, though not exceptionally more skillfully. Adamson stalwart Zandor Vorkov turns up as "Mohammed" - surprise surprise, the Arab. Kent Taylor also makes an appearance as the Mad Doctor. John Bloom as the disfigured giant doesn't have to do much other than say "mine" a lot - I guess it's hard to deliver a virtuoso performance under three inches of latex and goo.

To finish up, "Brain of blood" has something to offer fans of bad cinema. The copy I viewed had a sort of yellow look throughout, I wasn't sure if that was the state of the original or the copy. Nonetheless, you schlock fanatics out there should take a look!