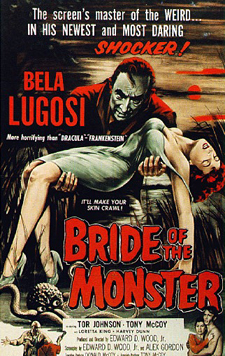 Being a big fan of Bela Lugosi - oddly enough, no relation - I don't get any sadistic kick out of watching the aged man acting in movies that were beneath him, as the general populace of the time sneered at his fading career. He gave so much of himself, to so many classic movies, that he didn't - and doesn't - deserve the snickering and derision. That said, although it's a diminished Lugosi that appears in the Ed Wood Junior classic "Bride of the Monster", this film offers so much in the way of entertainment value, that I get a "kick" out of the whole production, not just poor old Bela overacting and flubbing his lines.

To varying degrees, anything directed by Ed Wood is worth watching. Not always because they're badly made - and they are - but because they consistently aimed for heights that the director and the budget just couldn't meet. I guess there's something comforting about watching a film that you would have imagined making as a little kid, as well. Well, this little kid, maybe I was a bit weird. Anyway, I can't imagine I need to describe at length the man or his movies to you dear readers - if you draw a blank with Ed Wood, just watch the movie of the same name as a good start.

So the combination of Bela and Ed really came together in this one - it's a pity it was his last speaking part before he died, but what speeches he was given! More on that later.

The plot's seminal sci-fi/horror from the thirties - transported into the mid-fifties. Dr. Eric Vornoff (Bela), along with his assistant, the Tibetan mute Lobo (Tor Johnston, a giant ex-wrestler) are working on creating a "race of atomic supermen" with radiation, living in a decaying mansion in an American swampland. Two lost hunters are killed by the madmen - one is killed by Vornoff's giant octopus - which is either a muddy closeup of an octopus in a tank or a rubber prop - the other is subjected to Vornoff's radiation, which promptly finishes him off. No atomic superman this time around.

A nosey female reporter starts poking about the swamp after people report sightings of monsters and after the disappearances. Sure enough, after being terrified by a snake, Lobo comes to the rescue of the poor girl, who swoons on cue. But Lobo is transfixed by her Angora scarf, which he pets like his favourite moggy. After hypnosis by Vornoff, she's subdued into becoming the "Bride of the Atom", complete with a wedding dress, but what was meant to happen after this is anyone's guess.

Soon her cop boyfriend is on the case, and finds himself in more trouble than he can handle. Lobo wrestles him into unconsciousness, but after a command from Vornoff to turn the girl over to the radiation, the brute rebels and straps Vornoff into the photocopying machine - sorry, radiation device. After a lethal dose, Vornoff rises from the machine as a scar-faced giant ... He has become his own atomic superman! He finishes Lobo off, and makes his escape as the authorities close in on him. As mayhem ensues outside, Vornoff falls into the waiting clutches of his octopus, perishing in an atomic explosion as lightning hits his cursed mansion. He "tampered in God's domain" and payed the price.

Okay, that's fine for a plot description, but what about the "Wood-isms"? Why would you watch this over a hundred other B-grade movies with similar themes, that are fun-to-watch "bad" movies? Like I said, sheer entertainment value. You've got Bela uttering delicious dialogue, such as, "Home ... I have no home. Hunted, despised ... living like an animal. The jungle is my home! But I will show the world that I can be its master! I shall perfect my own race of people ... a race of atomic supermen that will conquer the world!" There's several other gems like this, and Bela, God love him, is really putting his all into it. You've got setpieces such as Dr. Vornoff whipping the crazed Lobo with a very-soft looking whip, commanding him to obey. You've got Lobo bumping into sets. Lobo using some old wrestling moves on his young enemy, the cop. Lobo falling in love with the nosy reporter, eliciting extensive pathos. If you haven't seen Tor Johnson before, well, I'm not going to tell you much, other than he is a seminal figure in the pantheon of B-pictures. Perhaps my coyness to tell you much will convince you to explore further.

You've also got killer octopuses that don't move an inch - the victims, including Vornoff - just wrap the limp tentacles around themselves, screaming in mortal terror. Police chiefs with parakeets perpetually on their shoulders. Kelton the cop - the unfunniest funny cop in movie history. For sheer technical ineptitude, you might be more advised to watch "Plan nine from outer space", which has more obvious errors and cheapness. This little doozy is more like a deliciously askew standard B-grader, enlivened by the wonderful presences of the old master, Lugosi, and the commanding bulk of Johnson, practically bursting the sets at any moment.

For more surreal Wood, try "Plan nine" or "Glen or Glenda", but for a simple, fun night in, chuck this one in the VCR or DVD player. Just don't tamper in God's domain, okay?