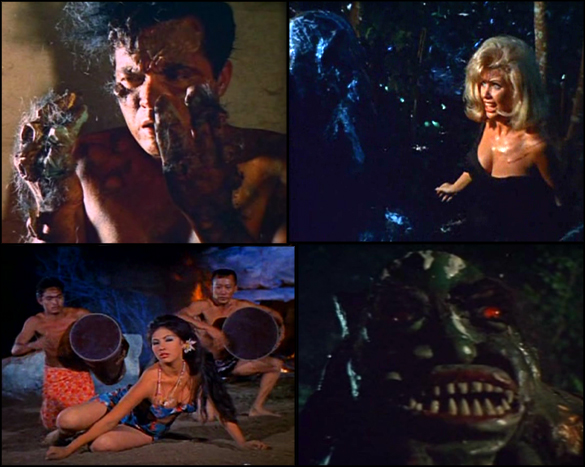 God bless Filipino film-maker Eddie Romero. With titles like Black Mama, White Mama, Beast of the Yellow Night, and Savage Sisters, any of Mister Romero's output is worth a watch for cult cinema enthusiasts. Brides of Blood, co-directed by Gerardo de Leon, is no exception. I'm also very partial to any horror or sci-fi set in a tropical island locale, so Brides is a winner on all fronts for me. The more I think about it, this film has it all. You've got beautiful island women dancing in fertility rites, the buxom actress Beverly Hills - more on her later - tropical scenery, a smattering of gore and nudity, savage, hulking monsters, and killer mutant plants. I couldn't wait to watch the film, and I wasn't dissapointed for a second. Thank-you, Eddie. 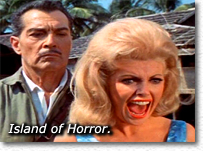 Doctor Paul Henderson (Al Adamson regular Kent Taylor) has arrived with his wife, the blond Carla (Beverly Hills) on a small island in the Pacific - Blood Island. The ageing scientist wants to do research on the effects of radioactivity on living things, as the island was downwind of Bikini Atoll when the atomic bomb went off. Carla hardly seems supportive of such an endeavour, and the obviously nymphomaniac woman shows us her proclivities when one of the boat crew roughly attempts to half-rape, half seduce her, away from Paul's sight. After putting up a weak fight, Carla soon gives in quite enthusiastically. Later, establishing themselves on the island, Paul and Carla, along with Peace Corps officer Jim Farrell, who wants to bring western efficiencies to the natives, are horrified by what they see. Islanders carry small packages of bound-up palm leaves out to sea in some kind of mournful ceremony. All seems well until one of them unravels and bloody human body parts fall out, including a head. Carla screams in horror. 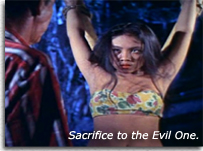 The beautiful island girl Alla (Eva Darren) greets the visitors. She's the granddaughter of the village chief Arcadio (Andres Centenera), and intially, the younger Jim is very taken with her. Still, something's very amiss among the villagers. Every night, young women draw lots and who ever fails the test seems very unhappy indeed. Later, Henderson and Carla explore the island and find a dead, enlarged mutant crab and strange plant lifeforms. Carla comments that the sky seems strange and mournful. In their travels they're taken in by the handsome patron of the island, Esteban Powers (Mario Montenegro) who lives in a jungle mansion, run by an army of scurrying dwarves and a hostile, disfigured native called Goro (Bruno Punzalan). Goro evens whips one dwarf who stole Henderson's flare gun, but Esteban seems to do little to chastise him. Henderson, Jim and Carla attempt to explore the jungle more with Goro at their side, and are attacked by mutant vines. Henderson hacks them off as they engulf the screeching Carla. After this little interlude, Henderson, Jim and the recovering Carla witness a strange rite as a procession of somber villagers goes past. Arcadio presides over two girls being tied to stakes and stripped naked for some sort of ceremony. The visitors attempt to intervene, but are chased away by islanders with machetes.

Back at the village, Alla attempts to explain that the islanders have gone back to old ways and are "none too proud of it." Before she can explain any further, a butterfly enters their hut and mutates into a much larger and aggressive version of itself. Henderson attempts to catch it in a jar but it attacks and injures him, before escaping. Horrible groaning and wailing sounds echo through the night as we finally see what the girls are being sacrificed to. 'The Evil One' attacks - a giant, hulking, gnarled monster hurls itself at the naked girls, and we are led to understand they're being torn limb from limb. The next day, the ceremony of placing the remains in the sea takes place again. Alla tries to explain that nothing can be done, as the creature would wreak further devastation on the village, if not given the female sacrifices. This is how he 'fulfils his desires.' Carla and Henderson are taken by Goro to stay with Esteban, and Jim decides to stay with the villagers and try to help them further. To Alla, Arcadio and Jim's horror, Alla loses the next lottery and is the next to be sacriced to the creature, along with another girl. Jim tries to intervene, is knocked out and tied up. As night falls, he manages to escape. One of the girls is killed by the Evil One, but Jim manages to reach Alla in time and fires a flare at the monster, which retreats into the jungle. He rescues Alla - we don't see her naked - and takes her back to the village. Alla refuses, saying all the village is hunting them now for breaking the rules and angering the Evil One. They flee to Esteban's mansion and Goro lets them in. 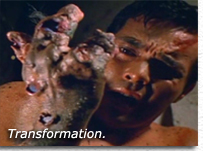 The next night, Carla tries to seduce her unresponsive husband. Frustrated, she then goes and spies on a half-naked and writhing-on-a-bed Esteban, who she's taken a fancy to. Goro sends the negligeed, buxom woman away as the master is suffering from one of his 'migraines'. Over a feast, Esteban explains how he and his deceased wife were first on the island, before the new settling islanders came. Esteban's wife died of a mysterious skin-darkening fever, while Esteban now suffers migraines. Henderson starts to wonder if radiation didn't play a part in this, and all the mutations he's seen so far. As night draws in, Esteban's migraine gets worse and he staggers off into the jungle. Carla follows, hoping she can seduce the stricken man. Dodging the ever-present mutant vines, Carla's suddenly attacked by the giant Evil One. Her face almost looks calm as he prepares to dismember her - perhaps this physical attack is the ultimate sensual experience for her. The Monsters rips her nightie off, we briefly see her nude form from behind, and she meets her fate off-screen. Henderson takes a machete and with Mark and Alla, go in search of Carla. As Alla and Mark fend off the mutant plants, Henderson runs into Goro. Esteban's manservant tries to force Henderson to return to the mansion, but a fight breaks out and Goro kills the scientist. Mark and Alla try to help but it's too late, and Goro escapes. Esteban staggers out from the jungle, and they help him home.

Back in the mansion, Esteban looks for his 'migraine pills' but it's too late - the transformation begins again. Esteban is The Evil One! Unaware that he's changing, Alla and Mark try to help him but he feigns an injury, and they leave. They return to the jungle to try and stop Goro, whom they believe is now a crazed killer. Meanwhile, a hideous change takes place for Esteban, with lumps, boils and clumps of hair sprouting all over him. It's actually pretty well done, and a good job by the make-up people. Soon Esteban is fully transformed, and storms out of the mansion looking for victims. Fighting off killer plants who are consuming Carla's bloody remains, Mark and Alla run into a bloodied Goro and a fight ensues, but who should interrupt them but a fully-monsterised Esteban. The creature kills Goro, but Mark and Alla manage to escape the carnage. They flee back to the village and after some tense moments, finally convince Arcadio to take up arms against the monster, instead of sacrificing their women-folk to it. They pick up their torches and get ready for the onslaught. 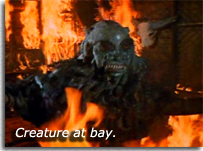 The Esteban-monster lumbers back to the sacrificial area and, with with no women there, goes berserk, tearing up the place. The villagers attack with burning torches and drive it into a hut - one with Alla hiding inside. Soon the hut is fully ablaze, but luckily Alla is thrown out in her struggles with the Evil One. Mark, not knowing Alla is safe, enters the hut and has a brief struggle before being thrown out himself! The huts goes up completely in flames, but who should stagger out a few minutes later, but a charred, but now-human Esteban. Will he survive to see Alla and her friends do their fertility dance for Mark and their young suitors? Will Blood Island ever return to normal and leave it's evil, radioactive past behind?

I adore Brides of Blood, but let's look at a few issues first. I guess in today's PC world it's not that great to have the natives claiming that they're 'not too proud' of returning to their ancestral ways - that the way of the west is the only right way. Possibly problematic too, is that they go on slaughtering their women in order to stave off the Evil One, until a westerner, Mark, shows them how to fight back. Carla is portrayed as a devious vixen but really, she's married to a cold fish, and is just looking for some attention. Yet, the film-makers decide she need to be ripped to pieces to suffer for her sins. But look, Brides of Blood is a lot of fun and probably we shouldn't think too hard about it. I adore the look of the film, the island setting, the beaches and lush forests. The native girls all look wonderful with their colourful sarongs. The Esteban-monster is obviously a costume with a stiff, unmoving face, but it's pretty startling in some shots. I think if you were a kid watching this, it'd scare you! The wailing and howling the creature does at night is actually quite unnerving, too. 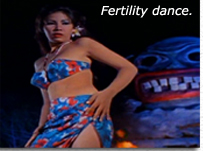 Acting-wise, it's all at the level you'd expect for a film like this. Beverly Hills is gorgeous, and fills a black negligee exceedingly well. She does play the jiggling vamp to good effect, but at least the film-makers gave her a couple of brief, humanising scenes where she's trying to repair her relationship with her husband. Eva Darren as Alla is exotically beautiful, and I can understand Mark's enthusiastic clinches with her, right at the end of the film. That fertility dance is pretty well done! In a way, the islanders are left with a bad situation, as their home is still infested with killer plants at night and who knows how many dangerous, mutant animals. Again, I guess we're not meant to think too deeply about this, and just enjoy the climactic fertility ritual.

If you're looking for a good start with Filipino cult cinema, or the works of Eddie Romero, I can heartily recommend Brides of Blood. It's got a lot to offer, even just as a nice, brightly-coloured cult film, in it's own right. Now I can't wait to see Mad Doctor of Blood Island and Beast of Blood, set on the same island with a new set of enjoyable horrors!