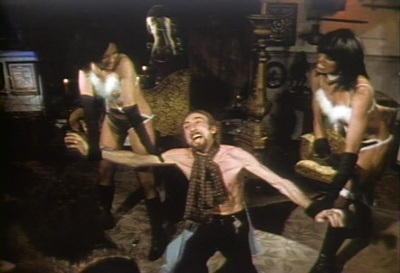 Well folks, it takes a lot to disturb your old Uncle Boris, but after some recommendations from a couple of friends, I took a look at this legendary sex n' gore sicko. Did the frequent gore disturb me? Hey, I've seen heaps worse and laughed it off. Did the copious quantities of nudity? Well, nudity on it's own is hardly disturbing. So what upset you, Unky Boris, I hear you asking?

Okay. I'll give you a rundown on the plot, which may in itself clue you in on some unsettling aspects! "Theatre of the Macarbre" owner Sardu (Sheamus O'Brien) and his dwarf assistant Ralphus (Luis De Jesus) run a white slavery ring in New York. Girls looking to make it in the big apple are kidnapped, and sold off to other countries as, presumeably, sex slaves. Some of the girls are thrown into cages in Sardu's dungeon, and become crazed, naked cannibals for some reason. Others are used in his stage show, which the dazed audience believes is fake, but which actually involves the real torture and mutilation of the hapless women. One of the audience is theatre critic Creasy Silo (Alan Dellay) who approaches Sardu at the end of the "show" - which featured a nude woman in thumbscrews having her head crushed in a vice, then another being flogged, then having her hand sawn off by Ralphus - and berates him for how pathetic it all is.

Sardu and Ralphus respond by kidnapping him later, and keeping him captive in their dungeon. They are going to make an example of him in their broadway ballet show. Abducting a famous ballet dancer Natasha D'Natalie (Viju Krem) they subject her to all the horrors that will happen to her if she doesn't dance for them. They even abduct another dancer and chainsaw her feet off, to shock her into complying. Finally, Natasha's mind snaps and she becomes an obedient slave to Sardu.

In the meantime, Natasha's boyfriend Tom (Niles McMaster) is on her trail with a sleazy cop, Sergeant John Trucci (Dan Fauci). Trucci had earlier blackmailed Tom into helping him. Trucci tries to horn in on Sardu's game, while they attempt to rescue Natasha from Sardu's clutches. But Natasha acts as if everything is normal, so brainwashed by Sardu is she. Finally the big show is revealed - Natasha does a dance act in which she kills the captive film critic with balletic high kicks. No one is the wiser, but Tom and the crooked cop again try to rescue her, which forces them into a confrontation with all the horrors of Sardu and his dungeon. All is set for the final gore-drenched showdown, and let's just say the naked cannibal girls finally come into their own.

So, did the film disturb this viewer? In a way, yes. There were a couple of scenes - one involving an insane doctor who likes drilling through his victim's head and sucking their brains out through a straw, I guess he's the titular "Bloodsucking Freak" - in which I felt the actress was being abused, not just the character. The roughing up was getting a bit over the line. I knew the whole film was about naked women being abused in various gruesome ways, but the scene with the doctor involved some pretty real-looking slapping. There's also a scene where a woman has electrical clamps put on her nipples. Now, I'm sure she didn't have real current coursing through her or anything, but should a mainstream, that is, non porno, film show women's breasts being demeaned in this way? I'm not sure... Of course, whether any film should show this is a much bigger question which this one short film review couldn't hope to cover.

The film left me with an uncertain feeling in this regard. Sure, its practically a sick comedy, and the gore scenes barely convince. In some ways, I found the film quite dull - as directed by Joel M. Reed it's just one flatly-filmed gore scene after another. The acting is all high-camp, especially the effeminate Sardu whose real sexual preferences don't turn up until right at the end of the film - I won't spoil the surprise for you. He also likes being lashed by his female minions - I forget to mention he has a couple of barely-clad women "generals" who seem as bad, at times, as he and Ralphus! The musical score is quite jaunty considering the subject matter, and further pushes the notion of this one as a demented comedy.

I won't come right out and say I was mortally offended after viewing Bloodsucking Freaks. In fact, it kind of dropped out of my mind as soon as I finished viewing it. Nonetheless, a few moments just didn't feel "quite right" and therefore I can't quite recommend it to my readers, like I often do on a reviewed film. I'm glad I saw it though, a little historical viewing hole has been filled, and they certainly don't make them like this anymore!