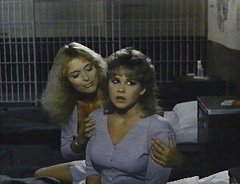 Lordy Lordy, does this one have everything for women-in-prison and sexploitation film enthusiasts. Linda Blair's acting career certainly took an interesting turn after The Exorcist, and I've read somewhere that she's raped in practically every film she's been in since! What gives? Is this woman a masochist or something? Anyway, she's a central role in this, a classic of the "WIP" film, which, as directed by Paul Nicoholas, is certainly one of the seminal entries in the genre.

Carol (Blair) is convicted of manslaughter via a hit-and-run, and sent into the slammer for eighteen months. But what sort of slammer is this? Although the "New Fish" is befriended by tough inmate Val (Sharon Hughes), anyone else in the hellhole seem set on making Carol's jail experience just that - Hell. Leader of the white gang Ericka (Sybil Danning - need I say more?) has the hots for Carol, but after a nude proposition in the shower, Carol rejects her and so begins the hard road for our little ex-possessed girl! In the meantime, we're introduced to Captain Taylor played by Stella Stevens, in an uncharacteristically mean role which she plays to perfection. She's involved in a play for ultimate power with Warden Bacman, played by John Vernon. Now, the sublimely corrupt Warden Bacman is the ultimate sleazeball. You've got to see his prison-pad to believe it! He takes pretty-young-prison-things back to his inbuilt jacuzzi, (yes, really in his office), gives them whatever drugs they want and films them both having sex. This film is not short on the sex and nudity factor, I can assure you. The opening scene is basically just this scenario.

There is some serious drug-running going on in the prison, and Bacman wants to get to the bottom of it - after all, he's the bossman on that front. His little "snitch" we see at the start of the movie is killed by Ericka and her cohorts, but it turns out Erica is in cahoots on the drug front with Captain Taylor and her oily lover Lester, essayed by Henry Silva. However, Lester is secretly in more cahoots (and screwing) Ericka. There's a lot going on here, my little brothers and sisters! As this all plays out, leader of the black gang, Dutchess, played by Cleopatra Jones stalwart Tamara Dobson, is seeking revenge on the white murderer who razor-killed one of her friends. There is a surprising level of brutal, bloody scenes in this piece, I must remind you.

More mayhem ensues as Ericka and Dutchess duke it out with chains in the yard. After Carol is raped by Bacman, the tide begins to turn for the slammer. Taylor wants the top job, so she and her tough guard-offsider drown him in his Jacuzzi while he "frolics" with Val, who is spying on him for Carol. To keep the murder quiet, Val too is brutally truncheoned to death. To secure her promotion, Taylor vows to the authorities that she'll find the killer, by planting evidence on Ericka. As the bloody truncheon is found in Ericka's bed, the inmates decide they've had enough. And what WIP film is complete with the final bloody revolt? This one has it in spades. To end the new tyranny, Dutchess and Erica agree to a truce as the authorities surround them. Who will survive as the cooler goes up in flames?

You can't go wrong with this one. There's so much going on in the film that I've even had to leave some plot developments out in my synopsis. Almost everyone in this one goes nude at some point - which is a given if Sybil Danning is involved - is corrupt, runs drugs, gets beaten or does some bloody beating themselves. Of course, there's the requisite shower-scenes which are sexual shenanigans all 'round - I wonder if anyone actually washes themselves quietly in this prison? Acting is pretty serious given the fairly over-the-top subject matter, with Stella Stevens particularly relishing her wicked ways. Linda Blair plays great victim, but even she gets tough at the end, which is a bit of a relief after all her tribulations. Hairstyles are pure eighties-frizz and the music is unmistakably that era, which adds to the overall nostalgia factor.

If you're at all curious about the Women in Prison subgenre, please give this one a look. It's a classic of its kind, a full-throttle journey into the world of exploitation cinema at its uncompromising best.