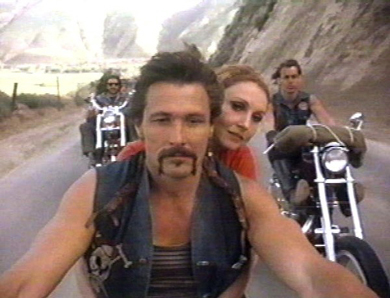 In the interests of keeping this website growing and developing, I'll be adding a few biker-film reviews to the collection in the coming months. I don't want to be stuck on any particular genre, and this seems to be the best way to keep things fresh. I haven't seen that many of this genre so it will be a learning experience for some of us, at least. That being said, this particular film is probably an odd way to start the biker section but hey, whatcha gonna do? This is because what we have here is the only Green Berets versus Bikers movie I'm aware of. So you see, it really has to be covered in these pages! Director Lee Frost is also known for cult classics such as The Thing with Two Heads, another mixed-genre work, "roughie" The Defilers and Nazi-sleaze effort Love Camp Seven. This man has done the lot! Any film featuring cult stalwart William Smith - see The Ultimate Warrior and Marvin Gaye in his only film performance has also got to be worth a watch. So in the end, was it? Let's see.

We start with some GI's in training. It looks like Vietnam warfare but we soon realize it's all a fake for training purposes. The purpose of this scene is to meet our Green Berets, who will eventually become the enemies of the Devils, the outlaw biker gang who do one of them tragically wrong.

Back in the States, two young women driving on a cliff-hugging road upset a group of bikers. One of them takes revenge too far, and smashes their windscreen with his chain - sending them over the cliff to their deaths. The leader of the gang, T.J. (Smith) is angry and gets Casey (Michael Haynes) to check on them. It's too late though, but T.J. reluctantly lets Casey stay in the gang. Casey has inadvertantly left his biker-chain, which provides some incriminating evidence.

We soon find out that one of the women killed was the fiance of Green Beret, Mitch (Tony Young). After his grief and through a process of deduction that I can't recall, Mitch is soon aware that the Devils are responsible. He recruits his war buddies, one of them, Jim, is played by Marvin Gaye with a nondescript performance. He arrives at the idea of posing as bikers to pursue and apprehend the culprits. Buying wimpy-looking red dirtbikes - I'm more your "chopper man" as you can see in my author section - they're soon wearing gang outfits. After a comical training sequence that seems to go on forever, which has them starting as complete novices up to becoming experts in what seems to be a few hours of crashing in some mud, the four vigilantes go off after the Devils.

It's unfortunate for the Bikers, as only one of the them is anything of a killer. T.J. hates Casey, and I can't work out why he keeps him on. Perhaps it's because he has a thing for Susan (Kathrine Baumann) Casey's "old lady" - some kind of vague attempt to keep her on-side. Anyway, Mitch infiltrates the gang temporarily after Susan falls for him, and T.J. grudgingly accepts him. Soon enough the beans are spilled, and Mitch is in for a major ass-whupping. Beaten badly, he escapes and rejoins the three other commandos. After organising some military hardware with an old contact, they ambush the camping bikers with fake bombs (which don't hurt anyone), martial arts moves, smoke grenades and sundry other weapons. The might of four of the army prevails against thirty confused bikers!!

As you can possibly guess, believability rides off into the horizon with a chopped-Harley's roar in this little action piece. It's all fun to watch, but I kind of wished the Army would get trashed instead of the poor misunderstood bikers, who all bar one are basically innocent until they're infiltrated by Mitch, then they turn mean. T.J. seemed to genuinely care when the two women went off the cliff at the start, but that aspect of his character is quickly dropped. The acting is all completely earnest which is odd for such an unbelievable plot concept. Are all the "berets" on holidays? How can they just dissapear for months, tracking bikers? Of course there's more holes but let's not labour the point. Marvin Gaye turns in a pretty invisible role, but doesn't hurt the film at least. William Smith is his usual manic, beastly self which is a plus in itself.

There's isn't much extremity in this film, which is a bit of a let-down. I was kind of expecting bloody violence, sex, road action, drug-trips and sundry other goodies, but it's still a nice little seventies-made drive-in entertainment, which is really what Girls, Guns and Ghouls is all about. It's worth a look on nights when you're sick of the latest Julia Roberts film. There are other biker classics to unearth soon, so please keep coming back to your old Uncle Boris to fill up your tank.