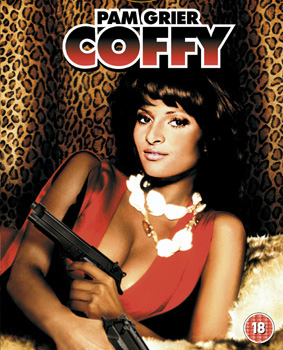 This website needs more Blaxploitation movie reviews. I always picture that it has quite a few, but scrolling down through the list, there really ain't that many, baby. So I'm gonna make amends. You can't make out you like this genre of film without reviewing a Pam Grier movie or two, and this is the best one I've seen. I saw Foxy Brown a few years ago, and was stunned by it's brutality. I'll have to re-obtain that one and review in these here pages, but this is a review of Coffy so I'd best get back to it. Director Jack Hill has crafted an efficient little thriller that has all the trimmings you could want from this genre, so let's get straight into it.

And that's exactly what this film does - get straight into it. Coffy (Pam) is pretending to be a strung-out whore to get revenge on a couple of drug-dealers, who contributed to her little sister becoming a catatonic drug addict. Coffy lures the two lowlifes back to their room and graphically shotguns one's head off - quite a startling scene - and then gives the othe whimpering coward a fatal smack overdose. Our heroine is a merciless vigilante, but in her normal day-to-day life is a nurse. Certainly, a double life is being led here. This is all revealed in the first few minutes!

An old boyfriend Carter (William Elliot), now an honest cop, still wants to have a romance with Coffy. Persistent though he is, Coffy likes him but is having none of it. She's in love with Howard (Booker Bradshaw) an ambitious politician on the city council. Nonetheless, Carter is beaten into a coma and left permanently disabled for refusing to go on the take with the other cops on his beat. Coffy is with him at the time, and is beaten and about to be raped before the masked assailants flee. Carter had mentioned a Mafiosi called Arturo Vitroni who was pulling the strings behind the current corruption. Now she's out to get him via a flamboyant pimp called King George (Robert DoQui). Wait until you see King George's outfit. It defines the look funky, you'll just have to see it.

Coffy goes undercover as a Jamaican hooker called Mystique - even having sex with King George to convince him. Yes, there is quite a bit of nudity in this film, and our Pam does not dissapoint. George sets up Coffy with Vitroni and he reveals himself as the sadistic bastard he is. Spitting on her and abusing her, Coffy attempts to kill him but is stopped by Vitroni's vicious thug, one-eyed Omar (Sid Haig). Coffy blames King George on the murder attempt, which results in George's gruesome murder by being dragged to his death behind a car. A nasty scene, folks. In the meantime, Coffy's held prisoner by the criminals. Ans who should turn up in the den of evil but her lover, Howard? Is he in league with the corruption, or trying to fight it from the inside? Will Coffy escape this with her life?

This is a wonderful little movie. I call it little because it seems to flash by so quickly. It's totally gritty, and there's barely a decent human being in it other than our title character. The villians are all thoroughly despicable, with Arturo Vitroni (Allan Arbus) at the fore of villianhood with his racist sex fetishes. Pam's a wonderful heroine, determined, vicious, even using razor blades embedded in her hair when in a showdown/catfight with King George's enraged hookers. Oh, and I guess she is a bity sexy as well. The language is colorful, the costumes out of sight and the music, well, this is classic funk for the seventies generation - which is me, my little lovelies. You could do a lot worse than buy this soundtrack. I loved the Greek-chorus type songs that often accompany Coffy in her quest, often telling her she is going too far in her deadly vigilante mission. It's compelling watching Coffy/Pam travel through the trail of corruption to it's ultimate end. The level of action is high throughout but Pam's character is what carries the film. Her performance is what glues your eyes to the screen, not just her body, which is admittedly overflowing through her flamboyant outfits in every scene.

Do I recommend Coffy to you Girls, Guns and Ghoulsers? Absolutely. You won't go wrong anywhere here. If you have a liking for Blaxploitation, it's a great example of this genre, and showcases one of it's most charismatic stars at her best.