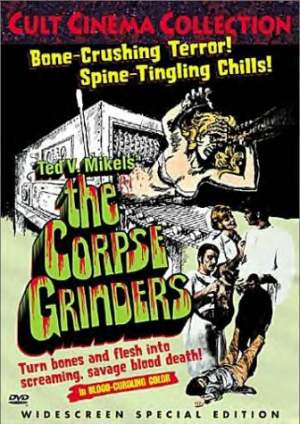 Ted V. Mikels isn't my favorite director by any means, by this little gem of seventies trash horror is completely compelling. I don't exactly know why, but I'll explore the claim and maybe we'll work it out together. If you look at it from a purely "production-line" point of view it has almost nothing going for it, but some quality seems to seep through by the film's end.

The plot's altogether pretty simple. Landau (Sanford Mitchell) and Maltby (J. Byron Foster) run a faltering cat food business. In dire financial straits, they take to using human corpses to provide the meat for the pet food, which suddenly becomes very popular with the pussies! Success is theirs at last! They hire weirdo grave-robbers Caleb (Warren Ball) and Cleo (Ann Noble) to provide meat by the pound, which ends up going through a huge meat grinder, hence the title. As more and more cats eat the tainted food, people start dying, usually pretty women in their underwear, and in one scene, a down-on-her-luck older woman living in slum digs. A fellow resident gives surgeon Dr. Howard Glass (Sean Kenney) and his nurse/girlfriend Angie (buxom Monika Kelly in her only film role) a clue that cats, driven into a berserker-flesh-rage by the human meat, are doing the killing. Especially when Angie's cat attacks Howard, and they deduce that they eat the same pet food. The cats, that is!

Soon Howard and Angie are paying a visit to the cat food factory under the ruse of buying bulk cat-food, but they're fobbed off by the tense-acting owners. Murders begin to take place as the slowly-becoming-crazed Landau, craves more profit and more meat. Caleb and Cleo are killed, with Cleo being buried alive after being shot. Howard and Angie, determined to get to the bottom of things, make a return visit to the evil factory. Soon enough, Maltby is killed, and Angie is strapped to the conveyor belt, slowly inching towards the terrible grinding blades ... while the cats wait patiently.

I think it's the little things that make this film work so well. Every supporting character seems to have some sort of eccentricity that makes them stand out. Crazy Cleo keeps a doll as company who she talks to, rather than her lunatic husband. There's a worker at the factory called Annie who's deaf and dumb, and has one leg. These quality never effect the plotline - they're just there for colour, I guess. Everyone takes it deadly seriously, and the whole thing just screams "late-night creature feature". You've got fog-shrouded graveyards, the ever-lurking, mewling cats and muttering graverobbers tossing around sheet-wrapped green corpses who look suspiciously like they are smiling in one scene! Sanford Mitchell plunges into ever-growing acting hysteria as Landau, basically stealing the film. Dr. Howard Glass is basically just there to look debonair (in a 1972 sort of way) but I wish Monika Kelly had done more work! She's not that great on the acting front, but brings a sort of serious, underfed Jayne Mansfield quality to the film. Yes, Girls and Ghouls, I do have a Jayne Mansfield thing. (Amongst a million other "things!") The music is straight out of a nineteen-thirties or forties Universal horror film, but that's consistent as this piece is pretty tame except for a few semi-bloody scenes, and a few body parts strewn around. The cat-attack scenes are only causes of mirth, as they purely consist of your friendly housecat being held at screaming actresses's throats. One of the film's best qualities is the lighting, especially in the factory scenes where we see multi-coloured lights playing over the various combatants.

All in all, give it a look if you've heard of Ted V. Mikels and want to see a good example of his work. It's zero-budget schlock-fare at it's best. And let's face it, with a title like The Corpse Grinders, everyone on Earth should see this film.