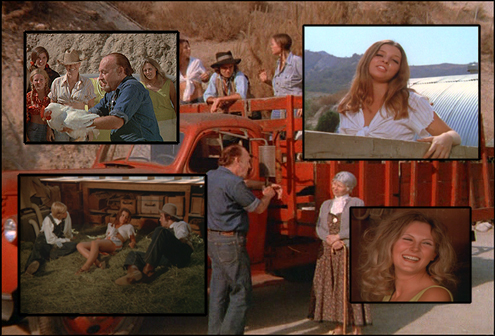 These pages have been lacking two important elements for some time: softcore hillbilly sex-comedies, and films featuring sex starlet Rene Bond. In one fell swoop I'm endeavouring to rectify that situation by looking now at director Bethel Buckalew's Country Cuzzins. And let's face it, how could someone called 'Bethel Buckalew' make a bad film? Did it happen with the Cuzzins? Let's get our moonshine jugs out, take a quick swig and have a look. We're viewing a virtually plotless film tonight which certainly makes for an interesting ride, as it were.

Billy-Jo Peabody (Rene) bickers with her sister - not sure of name or actress, here - and they fight while slopping the hogs on her family's farm. Her sister claims she spotted her canoodling with local boys and before long Billy-Jo is chasing her around the farmyard. She falls over in the slops and gets her cut-off shorts filthy. As her sister flees to safe ground, Billy-Jo decides to give herself an impromptu - and very long - naked hosing down. The nude Bond is something of a revelation here, as she is quite flat-chested before the obvious implants of a later era. Two young male relatives chase her into a barn for some "look and touch" - basically holding her down while ineptly groping her, while her brother, the studly Leroy (John Tull) has discrete sex with a local girl who can't wait for his attentions.

It's something of an occasion for the hillbilly Peabodys. They're having a family reunion with every country cousin in existence attending. After a family meeting on the porch with the elderly Ma (Zena Foster) and patriarch Uncle Fester - yes, really - the rest of the clan turn up, with all shapes and sizes of country folk, including the snooty Cousin Prudence (willowy Ellen Stephens), the family's only relative from the city, who looks down on all her, shall we say more basic, cousins. After a swig of Peabody moonshine though, Prudence's inhibitions begin to fall away and she goes on a giggling, stumbling tour of the farm with Leroy, who innocently compares her to a pig. Leroy, you see, considers pigs attractive. Meanwhile, the balding, middle-aged Fester has sex with Leroy's insatiable girlfriend, while some of the young clan steal away for some moonshine. Now thoroughly plastered, Billy-Jo ends up naked again for "look and touch" with her two clumsy young admirers, while Fester, having recovered from his sexual shenanigans, stages a chicken-chase - the prize for catching it being a goat - with the family. Ma discovers the naked Billy-Jo and sends her in for some clothes as the family all run past after the chicken. Wouldn't you know it, but the drunken Prudence ends up the winner. Still tipsy, she tells them all she's had such a great time she's going to invite them all up to the city for a huge party. The Country Cuzzins happily accept.

Later in the city, and of course sober, Prudence can't believe what she's done, bemoaning what's coming to her equally snooty friend. They decide to make it a hillbilly party to at least get some fun out of it. All of the guests will dress up as hillbillies to make fun of the country folk. Before leaving with his family, Leroy visits an old flame - not the girl he was screwing in the farmyard - and we see that he is trying to deflower the naive girl. Leroy says he won't tell her family or her friends, and finally convinces her. They have pretty graphic and acrobatic sex, probably more than I'd expect from a supposedly inexperienced virgin but, who can say? Maybe the girl had a sexual imagination just waiting to be released. Then it's off in the old farm-truck to the city with Uncle Fester, Billy-Jo, Billy-Jo's sister and the other cousin who keeps wanting to play 'look and touch'. Oh, of course, along with the goat and the pig, both of which they're giving to Prudence to give thanks! After a stop along the way to let the pig do it's business, they turn up at Prudence's pad. The butler looks horrified but finally they're let in. Prudence remains in hiding but the Peabodies are shown to their rooms.

Eventually, after Billy-Jo and her sister marvel at the squirting bidet in their plush room, the faux hoedown commences. Country music begins the proceedings and Prudence and her guests all turn up in hee-haw clothes. The Country Cuzzins all turn up in formal attire. Leroy plays "look and touch" to it's logical conclusion with one of the starlets in attendance after his cousin blunderingly fails again. Finally the inept cousin has sex with Prudence's once-judgemental friend. Billy-Jo is seduced by a smarmy, middle-aged Hollywood agent (George 'Buck' Flower) who claims he's training her to be a rock star by exercising her diaphragm, when he's actually having sex with her. Trouble is, he's got a bit of a heart condition, and Billy-Jo takes to the 'training' so well she turns the tables on the cad and screws him to death. All of Prudence's guests end up snubbing her for some reason, and all she's left with at the end is Fester and her cousins. Will she turn on them as the ultimate snob, or accept her good-ole Peabody heritage?

Buckalew's fashioned a fun little exercise here, and it's enjoyable to just let it wash over you and not expect much more. As you can probably tell, not a whole lot happens, plot-wise, other than copulation in Country Cuzzins! The sex on show is slightly more explicit than in some of the nudie-cuties and sexploitation covered in these pages from the sixties and early seventies, but not by much. We do get to see full-frontal nudity from both sexes, and the sex between Leroy and his 'virgin' gets quite intense. Rene's scene with 'Buck' Flower is ridiculous, and Flower makes my flesh crawl with his groping and ranting, but you can tell Bond is a sex star in the making - she's into bringing the scene across. Cuzzins has an enjoyable, twangy country score with most of the songs devoted to Billy-Jo. It's not incredibly well-made or anything, but there is a kind of charm in there, and I always get a kick out of scenes where large groups of people chase something in a chaotic kind of way. There's no real acting to speak of, but Rene Bond does show some of the presence that would make her more of a name in sex cinema later down the track. She's got an unusual face, both round-faced and innocent, yet sassy and petulant at the same time. I'm keen to see more of her work and report back to these here pages.

Country Cuzzins is worth a look on a number of fronts. You get to see Rene Bond in action, see some hillbilly silliness done reasonably well, listen to some fine old country music and learn about the wonderful pastimes of chicken-chasing and "look and touch". I don't know how to sell the film more than that!