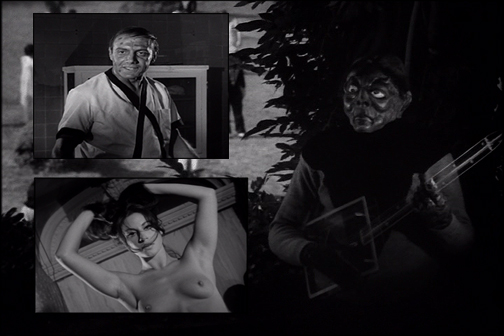 For all you aficionados of cult, horror and sleaze, Emilio Vieyra's The Curious Dr. Humpp is a must-view in just about every respect. Don't let the black and white photography lead you to think this is a sedate little old time-killer. This one has wall-to-wall visual thrills of the subtle and not-so-subtle kind, and colour would have somehow dampened its charms. Originating as La Venganza del sexo in Argentina, it was picked up by American distributors, dubbed and more sex scenes inserted to become the more marketable Humpp. So having never seen sexo in it's original form, I'll be reviewing only the Humpp version of this film. Was it worth the sheckels? Are you curious?

People all over town - I guess, an Argentinan town - are being kidnapped while in the throes of being amorous by a strange, silent man-monster. That's him pictured above playing the lute. Portrayed by an actor in a fixed mask with painted-on eyes, this guy is completely memorable despite the lack of expression. Lesbians, orgiastic hippies and even good old-fashioned heterosexual couples end up in his clutches, spirited off in a station wagon to the isolated mansion of Doctor Humpp (Aldo Barbero) and his female assistant, the blonde Enfermera (Susana Beltrán), where they are injected with 'aphrodisiac compounds' to make them super-sexual. Cue the sex inserts, but they aren't too intrusive and the actors are all right to look at, at least. Beautiful jaz-club stripper Rachel (Gloria Prat) is also kidnapped by the monster, at least after giving us a dance wherein the saxaphone player from the band is shown to be heartbroken at her unattainable naked gorgeousness.

We gradually get some sort of handle on what Humpp is up to. By experimenting on these people, Humpp is keeping himself alive by extracting a serum from their post-orgasmic bodies. We see him drinking a formula that stops a strange creeping mutation on his hand. Humpp also claims to be creating a better future for a type of super-sexual, super human that only he can create. Enfermera is against the experimentation on hapless, captive humans but devoted to Humpp, so goes along with it all, reluctantly. She begs Humpp to use her alone for his sexual experiments and not the others. Humpp heartlessly says he will, but in his own time.

In town, reporter George (Ricardo Bauleo) is adamant there's a link between these kidnappings and ones he covered in Italy years ago - where beautiful young people were turned into monsters by a crazed scientist experimenting with sex. He tries to convince the police, to little avail. The monster has been sent by Hummp for more compounds to druggists, but when one sees his visage from the newspapers, he panics and calls George. He's killed by the monster for his troubles. When setting up a stakeout with another pharmacist who eventually receives a drug-obtaining visit by the monster, George ends up following the station wagon to Humpp's lair. He encounters the other soulless automatons that Humpp has created, - sort of less severe versions of the main monster - and is taken into captivity along with Rachel. George falls in love with her, but the monster loves Rachel also. Playing a lute while Humpp's victims wander the grounds somnambulistically, Rachel comes to meet him, in a kind of trance, while the lesbian lovers fondle each other. Quite a scene, folks, you won't forget it in a hurry. Later Humpp forces George and Rachel's libidos electronically, forcing them to have mental sex as sexual images ebb and flow in the air before us. Humpp proclaims at last ... "Sex dominates the world - now I dominate sex!!"

Later George gets Rachel to drug Enfermera with ether, and when she wakes up later, dazedly thinking George is Humpp, they make love. Enfermera then decides to help the captives and takes a rescue note to the bartender where Rachel stripped. The monster follows her and kills the bartender, taking the betrayer back to the furious Humpp. We realize Humpp is under the tuteledge of a headless brain in a bubbling jar, the Italian scientist of years ago who, is still alive in a disembodied state. Humpp gives Enfermera the 'automaton serum' in front of the horrified George and Rachel, and forces them to begin having drugged-up sex. Suddenly George produces a hidden gun, and wards Humpp off. In the confusion the monster strangles Enfermera and attacks Humpp for trying to harm his lady love. George is knocked out and the creature bears Rachel away. The police, alerted to Humpp's lair, turn up and begin blasting Hummp's robot-like guards. Will they be in time to stop Humpp and his monster? What part will the disembodied brain play in the proceedings, and what is its connection with the curious Doctor Humpp?

Don't hesitate on this one, dear friends. Our poor dessicated monster has not one moving part on his face but he's a cutie, and his attempts at pathos with Rachel will stay with you. Aldo Barbero as Humpp is perfectly fine playing arrogant, desperate and angry in equal measure. His dubbed lines are entertaining enough, though - who knows what the original lines were? Gloria Prat as Rachel is great to look at, and does an alluring, wiggling strip in the smok-filled jazz club. Jesus Franco would have been proud. Ricardo Bauleo as George plays spirited and determined quite well, but again, sometimes it's hard to tell if the performance is in the dubbing or the physical presence of the actor. The sexual content in the Americanized version is pretty high but even in the softer original version, would have been quite titillating. To cap it all off, the gorgeous chiaroscuro photography is quite beautiful in places, sometimes at odds with the tawdry goings-ons at Humpp's mansion. There's a lyricism going on here that even the harder sex inserts can't fully dissipate.

I fully recommend this one at some stage of your cult cinema viewing career - it's a lot of fun on so many levels, and there don't seem to be that many Argentinian films available today for lovers of offbeat cinema - even if they have been 'doctored' by the American distributors. Come on ... get curious!