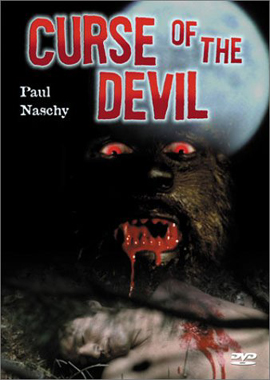 It's funny how a website evolves, isn't it? When I first started Girls, Guns and Ghouls, the website was going to be a sort of online journal of every film I watched. Latest mainstream, cult, anything. I soon realised I wasn't comfortable with any mainstream stuff on it, and went for the purely cult, horror, drive-in and exploitation. Things haven't changed greatly from the second core concept, but I'm very keen now to incorporate film from all sorts of cultures - of course American, English and Australian, but also Japanese, Italian, Spanish, anything I can get my trembling, gnarled hands on, really. So if any of you out there have any recommendations for international weirdo cinema, don't hesitate to drop me a missive, I'm always eager to explore new filmic areas.

It's with this spirit in mind, that I wanted to take a look at some Paul Naschy films. Nashy as an actor has been a mainstay of Spanish horror for years, mainly as his "Waldemar Daninsky the Werewolf" character. He's also explored Dracula, the hunchback and many other horror-based characters. I was certainly glad I caught up with this opus from the wonderful seventies (where I think about three quarters of GGG films hail from) and bring it to your attention. Let's look at some plot and some comments.

In a medieval past - Spain, I guess - Count Daninsky (Naschy) puts to death some Satanists in his region, and brings down a curse upon his bloodline. As the head witch is burnt at the stake, she evokes a curse which dooms the first Daninsky who murders another member of her bloodline to a fate worse than death. We'll soon see what that fate is all about.

Flash forward to the nineteenth century, and the current Waldemar Daninsky (Naschy again), has accidently killed a werewolf on a hunt. A band of witches send one of their younger number (Mariza Olivares) to seduce the lonely Daninsky, who lives with his motherly housekeeper in a castle. After seducing him, she bites him in the chest with a wolf skull, somehow activating the curse. From that moment on, Daninsky is a werewolf, cursed by the full moon to kill until killed. In the meantime, a maniac is ravaging the village and killing people, in a minor subplot but he is soon despatched.

An old married couple, new to the village, have two daughters, and while the younger one falls in love with Daninsky, the classier, older one captures his heart and becomes his lover. Love, however, does not temper the beast within, and Waldermar goes on to kill more villagers in various gory ways, usually tearing throats out, but at one point even dropping a huge rock on someone's head. Waldermar's housekeeper knows his secret, and after the younger one is killed, Daninsky's woman knows what she must do. With a silver dagger she must confront her lover - now the father of a child growing within her - and end his nightmare. As they say, who will survive, and what will be left of them?

This film did suffer from the dubbing, but still remains an enjoyable view. In fact, the dubbing was so ludicrous that it probably added to the enjoyment. The film has a good crisp look to it, I think director Carlos Aured was fairly proficient, and knew what he was doing with the cinematography. There's a good percussive soundtrack which seems to make regular use of bongoes, but hey, it works. Naschy is not a great actor, and with his background in weightlifting, he doesn't really cut a pathetic, gothic figure, being more the stoic muscle-bound type of few words. He's an effective werewolf though, with an "old school" Lon Chaney visage, though his activities are imbued with much more violence and blood. The body count in this film is pretty high! The other actors are pretty nondescript but none of them damage the film with inept performances. They're just there, really.

All up, I definitely recommend this one to lovers of the old school of European horror. The pace is not the quickest, but sometimes a film benefits from a leisurely approach to the proceedings. There's a bit of nudity and sexuality to spice up the proceedings, some gore, castles, knights and witches. And a pretty fine werewolf too. I came away satisfied and quite keen to catch another Paul Naschy film in the near future. All I can say is "Desea el horror Espańol vivo" and Paul Naschy, and stay tuned for more in these pages!