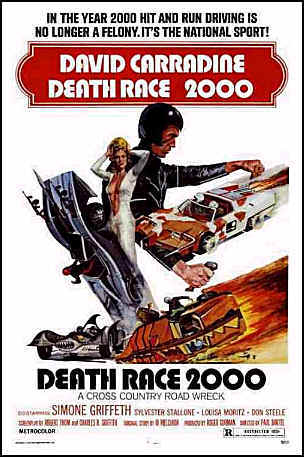 Produced by the prolific schlock producer Roger Corman, this is a wonderful little movie. One can see it as a kind of precursor to the Mad Max movies, or many other apocolyptic gems that feature fast cars and bloody accidents. This one's definitely a black comedy though, with something for everyone who's a fan of exploitation cinema. Cult director Paul Bartel has fashioned a film with plenty of nudity, blood, car stunts and even a bit of political satire for those of you who like some thinking on the side, with your serve of schlock.

Of course, it's the future. Society has deteriorated, at least in the good ol' U. S. of A. Mind control is the order of the day, and the President (Sandy McCallum) uses a violent cross-country road-race to keep the populace pacified. With participants like Frankenstein, masked racer who has survived multiple crashes to be rebuilt each time (David Carradine), headstrong bully "Machine Gun" Joe Viterbo (an unmistakeable Sylvester Stallone), Matilda the Hun (cult favorite Roberta Collins) and Calamity Jane (Bartel's partner Mary Woronov) it sounds like we're going to be watching a live-action "Wacky Races". Not so.

In this race, mowing down pedestrians gains you points. So each car is fitted out with spikes and spears, ready to impale any foolhardy people who get the cars' way. As the race progresses, we see how insane society has become as some pedestrians actualy play matador with the cars, hospitals wheel out their elderly for "euthanasia day" - to which Frankenstein quickly runs down the smug doctors and nurses, sparing the old geezers. Various other acts of carnage are committed by the other racers in the name of points. The gore scenes are quick and played for laughs, nothing's ever lingered on.

Each racer has a navigator (and sex partner), and Frankenstein is no exception. His navigator, the beautiful Annie (Simone Griffeth, of Swamp Girl fame) is actually a plant from the resistance. There are plans afoot by her grandmother Thomasina Paine (Harriet Medin) and her cohorts to sabotage the race and undermine the goverment. There is more, however to Frankenstein than we first believe. He isn't the scarred mess he looks to be under his mask - it's all a disguise. As Annie falls in love with him, he reveals his own plot to kill the President. Brought up from babyhood to be a racer, he wants revenge. As more and more racers are killed by rebels - usually blown up by landmines - Frankenstein and Annie finally reach the finish line and "Mr. President". Will they succeed in their mission and change the world order?

This all sounds very serious, but this is certainly black comedy we're viewing here. The rules are constantly being stretched as race officials and even high ranking officials are squashed, and then accepted as legitimate points. There's a ludicrous race-announcer giving a heavily biased running commentary. The racers seem to be constantly be stopping to get nude and massaged. It's all good fun and a constantly angry Sly Stallone adds to the enjoyment. It's good to see him played a flawed, physically weak character who gets his ass whupped.

The car action is quite well filmed in parts, not on the Mad Max level of excitement but still effective - they're obviously going pretty fast. The whole film has a washed out, saturated look to it that's quite interesting - it's flooded with light, with hardly a dark scene in there. Performances are serious from Carradine and Griffeth, but camp by all the others. It doesn't matter though, it all holds together as a solid trashy actioner that can stand repeat viewings.

So hop in this little buggy and go for spin. If you don't mind the blood, I promise you'll have some fun.