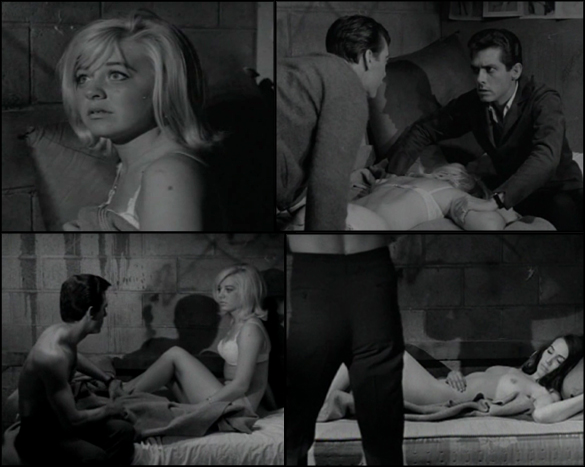 We may have the exploitation film-making dream team at the helm tonight. With The Defilers, you've got the redoubtable Lee Frost directing, David Friedman writing the thing and Byron Mabe as the lead 'Defiler'! Does this humble, black-and-white roughie live up to expectations, and make a lasting impression? Well, for 1965, this is quite intense stuff. A cool jazz score, some decent acting and a genuinely grimy, degenerate atmosphere all add up to something quite memorable. Let's descend into these twisted punks' seedy basement, and see exactly what's going down. 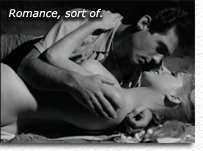 Carl Walker, Junior (Mabe) and Jameison (Jim) Marsh (Jerome Eden) are a couple of rampant, semi-beatnik hedonists. Living on the outskirts of Hollywood, they've managed to assemble a group of willing women they indulge their carnal desires with. Hanging out at the beach, Marsh seems to be more inclined to romance and monogamy than his dominating friend. He has a more solid relationship with one of the girls, Ellen (Carol Dark), as we can see by a semi-naked clinch on the sand. One of the girls complains that Walker bit her as they romped, and we begin to see a tendency for sadism with the older punk. After some skinny-dipping by some of the buxom girls, of which we seem them drying themselves off ad-infinitum, we get down to some serious dialogue action between Walker and Marsh, lying on the sand like a couple of lovers. "There's only one thing in this whole crummy, square-infested life that counts. Kicks! Kicks, Jim, Kicks. Dig me?" says Walker, delivering to us his manifesto. We are soon about to find out just how far he'll go for these kicks, and drag his friend along into the maelstrom with him. 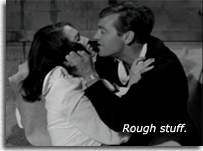 Walker has a sort-of girlfriend, Kathy (Linda Cochrane) whom he entices down into a dungeon-like basement he seems to own. At first she resists his lascivious behaviour. He soon gets rough with her, giving her a damned good spanking, and the poor girl seems to go ga-ga for the slimy deviate. Later, after having sex with Marsh in the back seat of a car, Ellen tells him she doesn't like Walker and suspects he's a not-nice sort of person. Marsh, seemingly in the thrall of his friend, fobs her off. Meanwhile the wide-eyed, hopeful Jane Collins (Mai Jansson) has arrived in Hollywood, and wants to become a star. We see her strolling around the walk of fame and taking in the sights. Unfortunately for the poor girl, she's taking an apartment with the sleazy Mrs. Olson (Mimi Marlowe) who also happens to be friends, for some reason, with Walker and Marsh. Mrs. Olson introduces the blonde Jane to the two sleazebags, who pretend to be normal and offer her a lift to a job interview. 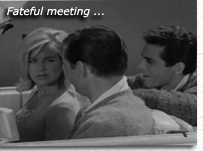 Later, Walker has decided he needs a new kick that isn't just grass, booze or willing broads. It's going to be the captive Jane, someone no-one knows about or will care about if they go missing. He talks the weaker Marsh into it, over the unconscious body of Ellen, who is stoned out of her mind. They stake out Jane's apartment at night, spying on her as she undresses, has a bubble bath and goes to bed. Of course, us voyeurs are complicit in all of this, and get an eyeful as well. Later, the punks seem to have talked Jane around to accompanying to a "Hollywood" party but of course the only party they're going to is their own at Jane's expense. No sooner do they pass through a door than they are descending into Walker's shadowybasement. Jane begins to protest, and is promptly slapped and stripped by Walker. She begs for mercy, but Walker offers none, and Marsh is not about to, at this stage. Jane's ordeal at the hands of 'The Defilers' has begun. 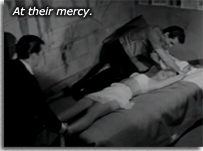 Between being offered some paltry scraps of food, Jane is raped and slapped around by Walker, then left locked in the basement as the two hoods return to their 'normal' lives. We get a glimpse of Walker's home life when we see him dining with his weak, semi-drunken mother and brow-beating, white-collar father. When his father's out of sight, his mother makes him promise to never become like him. With a knowing look, Walker says he never will. The two hedonists return to drugged-out orgies with their 'girlfriends'. In the middle of one, Marsh returns to the basement and rapes Jane, although he makes out he's not hurting her but 'loving' her. Later on, lounging at Walker's pool, Marsh lets his know he's worried Jane will end up dying in their little prison. We're not sure whether he's concerned for the girl's welfare, his own skin or both, but he seems to be developing something of a conscience. Surprisingly enough, Walker agrees to let Jane go, and they return to the basement.

Marsh eagerly tells their prisoner that they're going to buy her a new dress, and let her go. Jane, half-crazed with relief, moves to leave, but Walker stand in her way and laughing, slaps her back down on the bed. He was playing Marsh for a fool, all along. As Marsh protests, he ties her legs together, and begins to beat the shrieking girl with his belt. Marsh pleads with him to stop as the beating gains in intensity, screaming that he' going to "kill her". I'm not really sure how a beating with a belt would kill anyone, but maybe my knowledge of anatomy is not up to scratch. Finally he gains enough courage to stand up for her and his new-found feelings. He leaps at Walker and a titanic clash of the punks begins. As Jane lies unconscious - or perhaps even dead if Marsh's concerns were to be believed - the fight rages with both combatants becoming bloody very quickly. Will Jane escape her savage captor, or will her would-be rescuer be killed? Either way, death soon looks to be the only victor in this sordid little drama ... 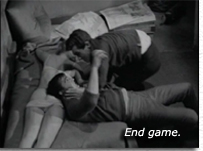 Okay, we've got some great sleaze personnel involved, and if you're into roughies, the classic storyline. Is 'The Defilers' worth watching and adding to your collection? Though a nasty chain of events happens, nothing is particularly explicit. Some of Mabe's slapping of Mai Jansson doesn't even connect properly but we know what's meant to be going on. There are no on-screen rapes but the focus is on Jane's suffering and reactions - for instance after Marsh rapes her, we just focus on her blank face, a single tear running down her cheek. Similarly when Jane is first stripped and slapped down onto the creeps' dingy bed, she cried piteously, and it's hard not to be moved. On the acting front, Jansson does pretty well as the put-upon victim. Mabe, apparently roped in at the last moment to play Walker after another actor froze and couldn't go on, actually does quite well. He delivers the beatnik dialogue in a memorable fashion and probably makes the film. Jerome Eden as Jameison Marsh isn't bad, but he's a secondary character, only becoming the film's conscience as it draws to a close. And let's face it, he isn't blessed with the snappy lines Mabe is. David Friedman indeed writes cool beat dialogue, creating some lines for the ages. The rest of the actors/actresses are basically required to be wallpaper, and buxom, fleshy wallpaper when the girls are concerned. I was actually a bit surprised by the amound of flesh on display for a 1965 film. On a technical level the film's a pleasure to watch, with nice black and white photography, and a cool jazz score. The set designers have also done well creating an appropriately seedy atmosphere, in the punks' crummy little basement. There's even some 1965 graffiti, here and there.

To finish up, as a cult cinema lover, The Defilers is worth a look from a stylistic point of view. It's a fairly classy example of the 'roughie' genre mixing nudity, sexuality and violence in equal measure. However, If you want to see women beaten, abused and raped in super-graphic detail, Lee Frost's film may disappoint on some levels. It's more an exploration of the mindset driving the villains, rather than an all-out rape and torture extravaganza that plays out every grim detail for your entertainment. Still, I don't want to be pushing this as an intellectual film, we're not talking Bergman here. I woudn't try to sell this to your sensitive, well-read girlfriend as a psychological epic that pushes the boundaries, and deeply explores the thoughts of villain and victim. This is an exploitation film, pure and simple, with a few extra trappings of style and performance. Definitely a must-see for fans of vintage sleaze, but probably not much more than that audience.