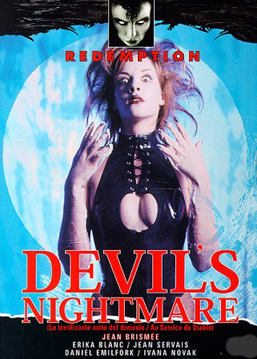 Another Italian gem here, friends. Many thanks to Redemption Films for releasing these greats from the seventies, otherwise us younger tots would never have been able to catch up on anything like this. We'd just be stuck with the eighties video fodder (and there's heaps of good stuff in there) but hey, let's get comprehensive! I'm digressing, as usual.

We have a fairly nasty prologue set in World War two, in a yellowish sepia tone, where a nazi Baron kills his first-born daughter with a dagger, as bombs rain overhead. But there is a reason for the scene, as this family, the Von Rhoneburgs, has a Satanic curse afflicting it.

Jump to the present, well, the seventies, as several bus-travellers are stranded at the Von Rhoneburg castle, with the self-same Baron who killed his daughter, and their menacing servants. Do any Italian nobility have friendly cheerful servants? They all seem to be deformed or malevolent. Is there something in the water? Soon, another guest arrives unexpectedly. Ilse, a spectacular redhead, turns up on the doorstep and the old maid is not pleased. But the Baron will hear none of it, and Ilse is allowed to stay.

Soon, our motley guests are revealing unsavory character traits. Greed, gluttony, lust (via a softcore lesbian scene) and the usual avarice. So it's time for Ilse to get to work and start bumping them off! You see, the curse of the family is that the first-born daughter will automatically be a Succubus, a slave of the Devil who lures hapless individuals to their deaths and beyond, servitude to old Scratch himself. But didn't the Baron kill his daughter? Yes, but not the Baron's brother's daughter, product of an illicit affair with the Baron's maid. Following?

So people start dying. Decapitations, impalements, suffocations, snakebites, even the Iron maiden treatment. With each death Ilse changes to a sort of blue-ish zombie type creature who does strange mouth movements. You'll have to see for yourself! Eventually only the priest of the group is left, and he makes a deal with Satan (a little bald guy, who drives a horse and carriage) to go into eternal servitude with him, in exchange for the lives of the others. But do deals with our old mate, Lucifer, ever really work out? A final bus crash, as the revived travellers pull away from the Castle, lets our betrayed priest know the full status of his deal. That'll teach him.

This one's not as insane or thrown together as say, "Nude for Satan", being actually quite well made. The acting's much more muted and low-key, and all involved seem like they feel they're contributing to a serious film. I actually felt quite sorry for the Baron, for all his small screen time. The camerwork is steady this time, too! But for all that, I can't say I enjoy this one quite as much, missing the delirium of other spaghetti horror films.

But hey, it has a great gothic look to it, and it's made with care. The music is consistently enjoyable all through with a recognisable, low-key "Ilse theme". And ... it's Italian! The more this site develops, the more you'll see I have a seventies Italian horror fetish ... among others. So sue me! If you can catch this one, do give it a look. It's worth it for the atmosphere and the general air of lasciviousness that permeates it, if nothing else!