The blaxploitation quotient of these pages has been languishing for a while, so it's time to tremblingly tread into that filmic ghetto again. Now, D'Urville Martin's little blaxploitation classic Dolemite is often referenced as a "bad film" on quite a few bad-film devoted websites. I may have mentioned before, but I'm no fan of the "so-bad-it's-good" school of film fandom. I don't generally laugh at films. All right, I admit to a few chortles during The Brain That Wouldn't Die, but I defy anyone not to have a laugh forced out of them, from that little cinematic wonder. I don't get drunk with pals, and throw empty beer cans at a film in derision. If anything, I go into kind of a passive viewing trance, and just accept whatever the director's vision is. A scene in daylight suddenly followed by night, all at the same time? A bat on a visible string, or a wobbly tombstone being knocked over by an actor? All the director's vision. I don't really care, I couldn't do any better myself, and I'm having such a good time just absorbing the whole thing, it can't be called a bad film. Anyway, rants aside, the fact that Dolemite has found a place in Girls, Guns and Ghouls must mean it has some redeeming features, at least to me! It's ragged around the edges at times, and misses a few opportunities now and again, but on the whole it's entertaining. That's all these types of films were meant to be. So why bag it at all? 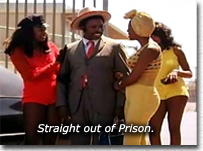 I'm not sure where Dolemite is exactly set, but let's disregard that. We start in a prison, where pimp/comedian/club-owner and all-round funky-dude Dolemite (Rudy Ray Moore) has been rotting for a while. Suddenly guards come in and bring him to the Warden. He's about to be released and friend/madam Queen Bee (Lady Reed) has had something to do with it. It seems that the neighbourhood has been going downhill since Dolemite was railroaded off to jail. The Warden's come into some new information that supports Dolemite's always-claimed innocence. We see in flashback how two thuggish cops frame him for having narcotics and stolen furs in his car boot. Dolemite puts up something of a fight, and is carted off by the waiting authorities. Later we see that Dolemite's arch-enemy, Willie Green (played by the director Martin himself) is in on the trap, and drives off laughing with the crooked cops, and the drugs. Back to the present, and Queen Bee tells Dolemite how one of his friends has been killed by one of Willie's associates. Willie then moved in and took Dolemite's nightclub, and the streets. The angry Dolemite is then offered a deal. Go free, but find out what's happening in the neighborhood. Make connections and get back to the Warden. No one will know what's going on other than the Warden, Queen Bee and the Mayor. Dolemite agrees. 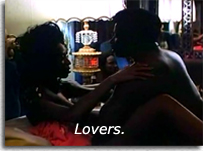 After leaving Prison, Dolemite changes into his funky threads as soon as he passes through the gates, and is met by several of his girls. They jump into his giant pimp-mobile and take off. No sooner do they go a few miles than they all start having sex. Still, even this enjoyable moment is interrupted as they all realise that they're being tailed by Green's men. Dolemite stops the car and hides. While the girls stall the men, Dolemite ambushes them and kills them all with a machine-gun, leaving the last injured one to one of his girls. Drinking in a bar later, Queen Bee tells him about how she's trained all of his girls to be experts in Kung Fu. This is, of course, a good thing. Later Dolemite has sex with oen of his many lovers. A short time later, the same two crooked cops catch up with Dolemite at his car and try to frame him again with cocaine. This time, our hero unleashes the full force of his Kung Fu mastery on them, and leaves them unconscious on the road, with cocaine stuffed up their noses. After amusing some street associates with his rhyming comedy routine, Dolemite heads off with an obviously drugged-up old aquaintance, in an attempt to get some answers as to what's going wrong with his beleaguered old neighbourhood. Back at his squalid pad, the junkie shoots up and starts passing out. Dolemite slaps him back into alertness and gets Green's name out of him, before Green's men storm the place and try to kill them all. The junkie's killed but Dolemite kills all the hoods. The corrupt cops show up yet again, and arrest the last man standing. Fortunately, decent black cop Blakeley (Jerry Jones) has been investigating the whole business, and after interrogating a few people rather forcefuly, again springs Dolemite from Prison. Our hero then proceeds to have sex with with one of his ever-willing girls. 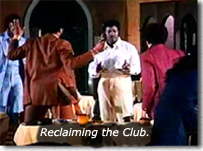 Dolemite and his girl then return to the nightclub her formerly owned, which was stolen by Willie. After some heated discussion with the dudes running the joint, he retrieves some hidden stashed money buried under the floorboards. A fight breaks out between several men and Dolemite, but he easily beats them all with some quick Kung Fu. He then tosses the money at the unconscious hoods, claiming the club back as his own. When Dolemite leaves, Willie enters the club and is furious to find his club lost and his men beaten. Later on, Dolemite meets up with all his girls, along with Queen Bee, watching them as they do their Kung Fu training. He tells them they're going to have to be ready for a fight. A frantic Willie barges in on the slimy little Mayor's party. The very Mayor that's meant to be Dolemite's ally. Willie tells the Mayor that Dolemite's getting the upper hand in the game. The Mayor tells him not to worry. Dolemite and Queen Bee start their first show at the club they've re-acquired. They're expecting trouble but go ahead anyway. Willie and his men enter the premises. A funky rock show begins the proceedings. Then some sexy tribal dancers introduce the star of the night - Dolemite. He gives us a taste of his rhyming ghetto humour, some sort of long-running joke about a jungle monkey. Willie loses control and all-out Kung Fu warfare breaks out. Dolemite's girls do their best, and most of the hoods are defeated. Willie chases Dolemite into a darkened dressing room and the two enemies begin duking it out. 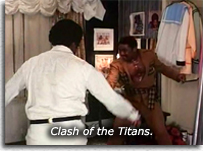 Willie Shoots Dolemite, but the funkadelic hero retaliates by kung-fu-ing him in the stomach and pulling Willie's guts out! This film actually has a smattering of gore here and there. Blakeley enters the fray and saves Dolemite from any more harm, putting a final bullet into Willie to make it official. Dolemite's taken off to hospital. The slimy Mayor is having sex with a black hooker, who later happens to overhear a conversation between him and one of the corrupt cops about Dolemite. It so happens she's one of Dolemite's girls, who then seeks revenge. Trouble is, the other hooker doesn't want any trouble and distracts Dolemite's girl long enough for the ugly, naked little Mayor to get the upper hand and strangle her to death. While Dolemite's in hospital, Blakeley's ambushed by some hoods but fights them off. He then gives chase in a car to the escaping Mayor, who eventually tries to get on a plane but Blakeley intercepts him. A gun battle ensues with the Mayor ending bloodily blown away. Blakeley returns to the hospital, hoping to head off the thugs he knows will be coming after the injured Dolemite - the two corrupt cops that have plagued him all through the film. Will the good cop make it in time, or will Dolemite be offed before film's end?

Right, I'll get the 'bad' aspects of Dolemite over with. The most obvious thing is the boom mike shows up in every other scene. It's sloppy film-making, but hardly ruins the experience. The girls are promoted in the ads as Kung Fu experts, and only practice it for about three minutes in the big club fight scene. That aside, the martial arts on display are pretty weak, and there's obviously no contact - at all - between opponents. It wsn't really a good choice to film the climactic Dolemite/Willie fight scene in a darkened room - you can hardly tell what's going on. Other than this, Dolemite's a lot of fun. Rudy Ray Moore was a surprise as the title hero. I was expecting a wise-cracking smartass but he's actually pretty serious all the way through. This film is not a comedy throughout! Though, some of his lines are choice, such as "You Rat Soup Eatin' No Business Born, Jive Turkey Mutha ... ", well, you know the rest. He's obviously got a flair for language and enjoys performing, as we can see by his protracted nightclub act. Moore also clearly enjoys the classic threads he's wearing as Dolemite. And a wonder to behold, they are. The rest of the cast come and go and are serviceable. D'Urville Martin is effective as Willie Green, Dolemite's arch-nemesis. His eyes suppress barely contained fury when his operation starts coming undone, where before he showed us decadent glee as Dolemite was marched off to prison, freeing him to take over the streets. The corrupt cops and insipid Mayor are all thoroughly one-note but enjoyably boo-hissable. For exploitation fans, there's numerous sex scenes and nudity - though I could have done without the podgy Mayor nude - plus as mentioned before, quite a bit of violence and gore. The soundtrack is appropriately funky for a blaxploitation flick, the title theme is as good as they come when this genre is concerned.

So, does a few boom mikes in view, and some weak fight choreography make for a 'bad' film? I've seen many a big-budget, big-star movie made recently that left me either annoyed, dissapointed or snoring. Dolemite did none of those things to this old blaxploitation fan, in fact quite the opposite. I was consistently amused and entertained by the exploits of Martin and Moore's slightly-overweight superpimp. So if you've a liking for this particular genre, I can only give this one a push. Now I'm looking forward to tracking down the sequel, The Human Tornado!