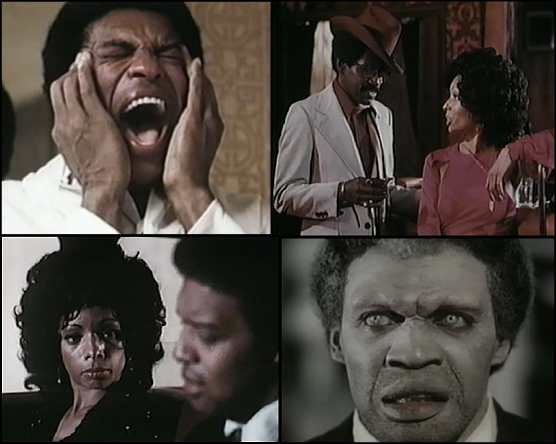 I’ve read, heard and used the term Blaxploitation for years, and there’s no doubt I have, and always will, enjoy the films that are tagged with this label. I guess the term can be explained by the concept of enticing people into the cinemas by the appeal of a virtually all-African American cast. The phenomenon happened for a reason and people, perhaps even whites too, were no doubt completely tired of seeing African Americans depicted solely as servants or comedy relief. I don’t really want to add the exploitation tag to this type of cinema though. It was a product that film-makers produced that people wanted to buy, market forces of the time at work. Any product produced for sale, to cater to a perceived need, you could call “exploitation” of the customers. I prefer the term “Black Cinema” as I can’t help but find some sensitive, socially aware moments within these films, even ones that blend the genre with horror.

With these sensibilities in mind, I found William Crain’s Dr. Black, Mr. Hyde to be a reasonably pleasant surprise. I only realised after viewing that he also directed Blacula, truly the towering achievement in the horror/black cinema hybrid. And that’s it – two films! What a pity he didn’t go on to direct more. I’ve only seen a faded VHS rip of this particular film so it’s hard to see it is a pristine, polished effort. There’s some great action sequences in it, and the central ‘Hyde’ creature is quite an imposing monster with an early Stan Winston makeup. Ex-footballer Bernie Casey isn’t bad in the title role of the troubled Dr. Pride and the albino Mister Hyde. Still, who could ever compete with William Marshall as Blacula?

At the start of our story, Dr. Henry Pryde is a respected scientist working on an experimental cure for liver damage. In a seemingly ideal life, he works with his lover, Dr. Billie Worth (Rosalind Cash), on perfecting the serum. For some reason, he appears uncomfortable describing it to a panel of worldwide doctors in an early scene. To support his Hippocratic oath, Pryde also donates his services as a doctor to a free clinic in the Watts projects. It’s here that he meets Linda (Marie O’Henry), a young prostitute who he’s treating for hepatitis, who seems to captivate him. In the requisite topless scene, Linda calls him out on being more a white man than a black man, even driving a white car, which happens to be a Rolls-Royce.

Pryde’s judgement soon appears to be clouded by his personal failings. Experimenting on rats, he finds the test subject turns white, and kills it’s cage companions. Seemingly unmoved by this strange side-effect, he injects an old woman, with soon-to-be-fatal liver damage, with the untested serum. Her pupils, skin and hair turns white, she attacks a nurse with a feral shriek and then dies. Pride, upon hearing there was an incident, appears unconcerned and does not care to hear what exactly happened. Where’s the scientific method? Billie is horrified that Henry proceeded but they seem to be able to patch things up. In secret though, Pryde wants to continue the human testing - on himself. Injecting the serum, Pride soon screams in agony and in a fairly well-done scene, becomes a huge, twisted albino creature, the Hyde of our film. Still lucid to some degree, he takes off in his Rolls-Royce to the city and demands the address of the bar where Linda frequents. The locals are none too happy to help this giant white monster-man, and are soon tossed around like dolls. Hyde appears to have some kung fu moves in there which helps the action. Having the address, the creature then enters the bar, and demands Linda leaves with him. Of course, Linda doesn’t recognise him, and the bar frequenters retaliate. Finally, through weight of numbers they fend him off, and he flees – to immediately attack and kill a prostitute.

From this point, Pryde seems to rapidly lose his mind. Back in his normal physical state, he asks Linda out on a date to give her a ‘surprise’. In the car, he reveals to her that he harbors resentment towards all prostitutes over the death of his mother, when he was a child. Pryde's mother worked as a cleaning woman in a brothel, and the prostitutes refused to help her when she fell ill with liver damage, resulting in her death. Linda seems touched by Pryde's admission but the ‘date’ turns bad when Pryde’s ‘surprise’ is wanting to inject her with the dangerous serum . Understandably she refuses. Pryde turns forceful and insists. Linda stalls for time by asking him to take the injection first, to prove that it’s safe. Perhaps lost in madness, Pryde injects, transforms and attacks. Linda narrowly escapes, but Pryde, in Hyde mode, kills another prostitute. More murders take place and the police investigate. One of the cops, Lieutenant Jackson, is played by Ji-Tu Cumbuka, who has a small but very memorable role as Skillet in Blacula, a very jive-talking character whom Blacula seems to fear! Maybe because of his dazzling fashion sense? Jackson is more of a straight-talking role, but still has some great lines.

Now that Linda knows the truth behind Pryde, she calls him for a meeting. Pryde agrees, pretending everything is okay, when they eventually meet up. Linda will have none of it, and demands that he give himself up, or she will contact the police – knowing now that he’s the killer. Pryde refuses, transforming and giving chase. After an extended and quite impressive sequence which involves throwing hapless people through multiple grocery displays, Pryde kidnaps her. Jackson and his grumpy white colleague, Lt. Harry O'Connor (Milt Kogan) have already questioned the distraught Billie about Pryde, and are beginning to join the dots. Pryde must still have some feelings for Linda, as instead of killing her, he drags her to the famous Watts towers sculptures. Cornered, the police dogs force him to drop Linda, and he climbs the highest tower, a beast at bay like King Kong. At this point he seems to have become a complete animal, shrieking and screaming in an inarticulate rage. After the police release a hail of bullets, will the monster who was the good doctor Henry Pryde survive to practice another day? You can probably sense where this ending is going …

You can’t help but feel some pity for poor Henry Pryde. Due to his inability to let go of his past hatreds, his medical and scientific judgement is clouded, Hell, even his emotional judgement is clouded and his life falls apart. The seeds of Hyde were always there, planted in his childhood, and he was probably never a stable individual. Is Hyde the white man that Pryde always wanted to be? Giant, white, strong, killing prostitutes and scum, driving that rich man’s flashy car? Yet a portion of guilt remains, with his work at the free Watts clinic. He wants to relate to the prostitutes he deep-down hates, through his attraction to Linda. But it’s all too little, too late. It’s interesting to see the women of this film, Linda and her prostitutes, talking about their oppression at the hands of men – pimps, johns and even Pryde becomes an oppressor towards Linda in the end. Linda wants to leave the oldest profession, but the obviously intelligent woman often asks what else could she do in this world? It also interesting that the form Pryde takes as an evil, demented creature is a giant white man - perhaps the ultimate oppressor of all?

Technically, Dr. Black, Mr. Hyde appears slightly more ragged than Blacula, but a blu ray release one day might rectify this. The action sequences and stunts are fine and Casey does well with his multiple fights. He can convey the inner pain and conflict of Pryde to some degree and does an effective, pain-wracked transformation scene. His character and odd behaviour makes a lot more sense as his back-story is revealed , and Casey’s pretty good at conveying this sad and contradictory man. Marie O’Henry as Linda is a feisty part, and can hold her own against domineering pimps and mentally ill doctors. Rosalind Cash as Billie is sidelined for most of the film, once the Linda plotline takes over, but does her best with a small role. She’s appropriately anguished as Pryde abandons his medical ethics to possibly kill the old woman, and returns to more sorrow at film’s end. Ji-Tu Cumbuka’s appearance as the investigating cop is welcome, and though a little more subdued than some of his flamboyant moments in other films, is still a memorable character and has some great lines.

Dr. Black, Mr. Hyde also has some enjoyable, funkadelic music by Johnny Pate – definitely a plus. So to sum up, you’ve got more going for this film than against it. If you have any interest in a time-capsule example of Black Cinema, I would recommend watching this one in some form. It’s certainly a lot better than Blackenstein which as you’ll read from these pages, was a major disappointment, and missed a lot of opportunities. At least the monster in this film has a few good scenes, and doesn’t just shuffle around in darkness. This film leaves you with something to think about, as you try to piece together why Pryde has ended up in this sorry state and is not practicing healthy, ethical research with a stable partner, which could have been a nice girl from either side of the tracks.