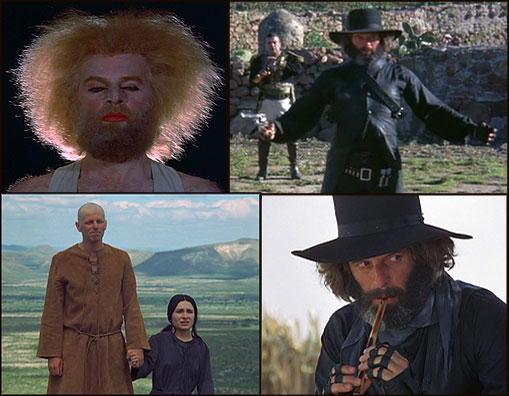 This could be slightly problematic for a person like me, who hates the thought of death full-stop. Yes, I know, we're all in it together, we all have to go through it and lose people and animals around us. Eventually, even our own selves have to pass into that great beyond. Death is a completely normal part of life. But that doesn’t make me embrace it any more than I already do, which is to not embrace it at all. It’s probably odd because I grew up on a farm which, as any farm does, constantly welcomes new life into the world and well as farewelling it into death.

Yet, the massively death-filled El Topo is one of the most amazing films I’ve ever seen, a mighty work of cinema the likes of which I’ve never witnessed before. After the experience, I was simultaneously appalled and enthralled by this indescribable film. I consider myself a reasonably compassionate person, and Jodorowsky’s Mexican-American co-production is sadly filled with the real-life lame and deformed, the downtrodden and emaciated. Are they being exploited? I’m not sure – perhaps they were aware they were contributing to a work of art in progress. Real death abounds for animals in this film. Off-screen, dozens of rabbits, horses and sheep were slaughtered to create background and foreground canvases of death. Crows are shot on-screen to be used as part of the scene between El Topo and one of his combatants. Dozens of humans are killed in the film by the various villains and our protagonist but of course, that’s not real – the animal slaughter clearly is. Yet, somehow, because of the level of art achieved I can watch the film in its entirety and even recommend it to others, something I could never do for a b-grade film featuring on-screen killing of animals. I’m curious about one question though … including the animals and fake human deaths, does any film have a higher body-count?

Death aside for now, El Topo – Spanish for The Mole - is a sort-of Western roiling with religion and surrealism of an extreme kind. Perhaps I’ll take a different approach with this review and go light on the plot description, and heavy on the general impressions! I’ve got to admire the man for getting his vision up on that screen, and as a work of pure art there are few films like it out there. David Lynch comes to mind at times, maybe Bunuel or Fellini? Distilling the story down to it’s simplest level and one paragraph, El Topo is a gunfighter searching for true enlightenment in the desert of a old wild west environment. He takes his young son with him on this search. Encountering a massacred village, he kills the eccentric marauders responsible and takes one of the captive women away with him. He abandons his son to the remaining villagers in the process. As he continues his journey, the woman urges him to kill four master gunfighters who live in the desert – then she can love him because he will be the best of them all. They encounter a woman in black who speaks with a man’s voice and falls in love with El Topo’s lover, whom he has named Mara. El Topo successfully kills all the masters through trickery, urged on by Mara. He feels intense guilt and is abandoned by Mara and the woman in black, who shoots him in the palms and the side like Christ. El Topo wakes up years later after meditating in an unconscious state on the mystic lessons passed down from the masters. He’s revered as the godlike figure of a group of cripples and dwarves who live in a sealed cave. Humbled, he decides to break open the cave and release the unhappy group so they can join the town nearby. He and one of the cave people, a dwarf woman, decide to beg in the town below by doing mime acts. However, the townspeople are corrupt and mistreat any slaves they can capture. El Topo is forced to impregnate the cave girl – who he loves - as entertainment. El Topo’s abandoned son enters the town as a priest and tells El Topo he will kill him when the digging through to the cave is done. Eventually the cave work is finished and El Topo’s son finds he cannot kill his father. The cave people finally escape but are all shot dead by the evil townsfolk. El Topo kills them all in a vengeful fury then commits suicide by self-immolation. The dwarf woman, her newly born baby, and El Topo’s son, now dressed as El Topo when he was a gunfighter, ride away into the desert.

Phew! Even trying to cut down the plot of El Topo to it’s barest bones requires a fair bit of thought and work. Reading my synopsis may intrigue you and make you want to see the film. The true worth of this experience lies in the visuals and the attempts at poetry that Jodorowsky’s indispersed throughout this peculiar tale. The horrors of capitalism and religion, injustice and the plight of the poor, mysticism and vanity all weave their way in and out of the story. El Topo, as played by Jodorowsky himself, is initially an arrogant, lone warrior character who believes he is God when he passes judgement on the bandits, slaughters them all and castrates their colonel. Maybe the act of abandoning his young son – who is naked for some reason – to the surviving monks of the village, begins his downfall. He then wavers when Mara persuades him to kill all the desert ‘Masters’ and feels intense guilt. Returning to their graves, he finds the corpses swarming with bees and devours the honeycomb forming in howling anguish. Mara and the woman in black turn on him and basically crucify him with bullets.

The second half of the film becomes slightly less surreal, but still mighty strange, when a group of cripples, poverty-stricken ‘normal’ people and dwarves take The Mole to their sealed cave and worship him as a God of sorts. Desperate to atone for his trickery and murder of the Masters, he takes the dwarf girl to the corrupt town, who torture, abuse, and execute various slaves. A fake priest has set up his own violent religion which involves playing Russian Roulette – of course, a child in the congregation ends up dead. The body count in the film really ramps up when the nasty townspeople open fire on the little people streaming down from their mountain prison to freedom. El Topo, seeing his efforts at helping the poor end in more death, gets shot multiple times but ignores the wounds. He then seeks bloody revenge with a rifle, killing all the townspeople and ending up setting himself on fire with the oil from a lamp. Death, death and more death! At least his adult son, baby and the dwarf woman are still alive at the end.

The film’s not just ugliness and brutality, I must add. It’s beautiful in places as well, the sumptuous cinematography by Raphael Corkidi shows stunning vistas and deserts in Mexico, as well as lush greenery and bleak mountains. Characters are often filmed in rich close-up as well, so don’t feel like you’ll be alienated by constant long shots of desert panoramas. The dialogue and story are filled with metaphors to aid El Topo’s journey so there’s nothing particularly realistic being said or done. Each desert master seems to represent a different philosophy or Eastern religion. Rocks don’t usually shoot live-giving water when shot, or bitter water turn sweet at the wave of a branch. It’s a film of mysticism, not a straightforward arc. The villains, like the initial marauders who kill a whole village and mistreat its survivors, or the evil townsfolk of the second half, are all caricatures of nastiness and oppression, laughing as they torture. What do they represent in a film with so many symbols? The baser nature of humanity at large? Tyrannical governments? Watch and decide for yourself. El Topo is a man who moves from arrogance to humility to vengeance and death. We are not sure if he has absorbed the lessons of the masters into his own fate. His grave is swarming with bees and honeycomb as one of the masters was, and earlier in the film, after deceiving yet another gunfighter he devoured honeycomb and smeared it all over his face in a fit of guilt. Religion could be under attack by Jodorowsky as we witness the stupid cruelties of the town cultists, yet the humble teachings of the murdered masters could be viable tenets to live by.

Jodorowsky himself plays the role of El Topo and acquits himself quite well, as our troubled protagonist. The arrogance and guilt of the man are all conveyed convincingly and he’s not a bad comedian/dancer/mime artist as wel! Mara Lorenzio as the Lady-Macbeth-like Mara, Robert John as Hijo, El Topo’s abandoned adult son and Jacqueline Luis as the dwarf woman give fine, naturalistic performances with the basic roles that they’re given, displaying fire and despair when necessary. El Topo’s not just a film of actors though – it’s a film of crowds and extras that help tell this strange tale and Jodorowsky directs multiple players, with various levels of ability and health through strange and often cruel scenes with aplomb. If you need your films to be realistic or even logical, I’d steer you away from this one, which often appears to be channelling the structure of a dream. I suspect even Jodorowsky wasn’t fully aware of all the meanings behind the symbolism he’s inserted into the story yet every scene has some sort of bizarre feast for the eyes that doesn’t necessarily make sense.

I’d like to finish this review on a note of recommendation. Though El Topo is a film suffused with death in every frame, sometimes for real, it’s still a monumental achievement in cinema, that needs to be seen by any lover of film. I’d love to see it on the big screen. We’ll never see it’s like again in any shape or form, and while you have to stare into an abyss of darkness, ugliness and cruelty to see it through to the end, you still come away marvelling at a work of art that took some bravery by the director to complete.