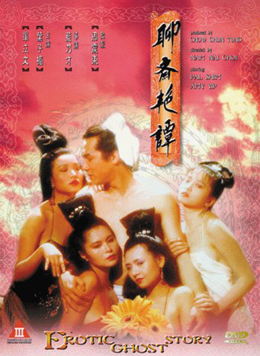 The plot is a variation on the "Witches of Eastwick" theme. In ancient China, three young fox-spirits have meditated for 1,000 years to able to shed their animal natures and become human. A priest warns them of dangers ahead and demons assailing their efforts. But, do they listen? Nope. These vixens have a playful nature, as we see from the opening scenes where they reveal their ghostly (and ghastly, if they want) natures to some bandits they've seduced. They are ripe for the derailing, as it were. The evil demon Wutung has plans for them.

Posing as a young scholar, Wutung seduces each one of them, in increasingly torrid sex scenes. There's literally steam blowing out of our protagonists in one scene. One of the sisters is Amy Yip, famous for her huge breasts and for her ability to strip, but show nothing. Watch and you'll get what I mean. Anyway, after sinking into an extended erotic revery with Wutung, their fox pelts begin to grow back on their chests,and the sisters need help. They're reverting to their animal natures after the contamination of Wutung. After seeing him hypnotise a young maiden, strip and kill her - a ludricous clay-mation effect of a face being pulled off, but the idea behind it is mean - our heroines realise what a monster he really is. A three-headed, demonic thing that lusts after women and needs the life-essences from their deaths.

I must say, this one, like "Sex and Zen", "Robotrix" and many others, is a personal favorite of mine. I love director Ngai Kai Lam's mix of horror, mythology and erotica, and that particular sense of Hong Kong humor which can veer into the annoyingly slapstick, but is very effective if handled well. The actresses are all beautiful and acquit themselves well in both the sex and non-sex scenes. Amy Yip in particular would have a sense of comedy and charisma, even if the "Russ Meyer" factor wasn't in evidence. Remove the sex content and these films still have a great sense of imagery, with the three-headed Wutung costume being bizarre in it's conception. There's lots of flying around the sets as well, which is done to death in this whole oeuvre, but always good to watch. I've yet to see Erotic Ghost story 3, but as mentioned before, the next sequel is a worthwhile view if you're into this stuff.

Recommended for lovers of Hong Kongean mythical-horror-erotica-comedy. And everyone else too, if'n you got a mind to it...