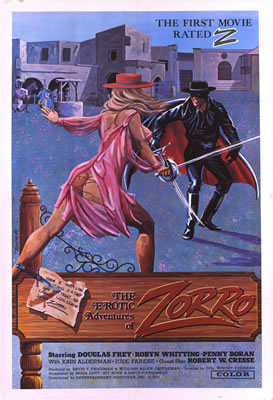 I'm not a big fan of the Zorro character, but stick him in a seventies sexploitation farce and I'm willing to give it a look. With cult cinema stalwarts like writer David Friedman and Bob Cresse from House on Bare Mountain fame, you're probably in for an entertaining ride, and all things considered, this little sex opus has a few moments of entertainment to offer regular readers of these pages. I'm always happy to see what "Loveable" Bob Cresse has to show us in his various screen appearances. This is actually a surprisingly well-mounted(!) film, there's actually a visible budget with the costuming and sets for a cheapo sex-piece, maybe this adds something for those with a low tolerance for shoestring budgets.

It's Los Angeles, hundreds of years ago. The administrator of the region, Luis Bonasario (Jude Farese) is totally corrupt and taxes the townsfolk into total poverty. A man who dares to resist the tax-roundup is shot dead, and his two virginal daughters are taken into sexual slavery by his offsider Esteban (John Alderman) and Sgt. Felipio Latio (Bob Cresse). Thrown into a barn, one young woman is raped by Esteban, who beforehand has run his foot all over her naked body and groped her nether-regions with it, somehow an uncomfortable scene. The other is forced to fellate Latio. The former administrator, who was thrown out by the never-seen Governor, sends a letter to Spain to call on his son at the military academy, Don Diego de Vega (Douglas Frey) for help. After attending a drunken orgy, during which he has to fight off a rival jealous of his reputation with swords and women, Diego returns to Los Angeles to help.

As soon as he turns up, Diego adopts a gay, outrageously camp persona, dressing in bright red foppish clothing, riding a mule and wielding an umbrella. Luis betrothes his horrified (and of course, virginal) niece Maria to Diego as his family has much money. In the meantime a black-masked, black-clad man with a cape stalks the town. He frees the two girls who had been assaulted by Esteban and Latio - not before the two naked captives had been tormented with a huge snake by a couple of nasty, lascivious officials, one of them played by writer David Friedman himself. Zorro, as he calls himself, then proceeds to make an impression on Maria, posing as the Father Confessor at her confession and trying to convince her not to become a nun. He reveals himself to her as the exasperated Latio's men give chase.

After dining with the despicable Luis, Esteban, Maria and Luis's wife Margarita (Michelle Simon) the seemingly ineffectual Diego arranges to go for a morning ride with the blonde Margarita. That night, Margarita seduces Maria in a long and reasonably erotic lesbian scene, as Maria expresses her doubts at ever experiencing any pleasure with the effeminate Diego. Margarita suspects all is not as it seems and finally convinces the coy Diego to have sex with her out in the countryside. She doesn't reveal the truth to the others, though. Zorro returns for another night of robbing the coffers of the rich, and returns to Maria's room, where the truly-in-love pair have a long and fairly explicit sex scene. I guess soft-core actors have their ways of stopping short of really "doing it", but these two looked to be not employing those methods... Still, when all is said and done, the identity of the masked mystery-man is still unknown to Maria. Zorro swears to return and marry her. Finally Zorro returns to Luis's headquarters and reveals himself as a completely 'straight' Diego. Challenging the evil Esteban to a duel of swords, can Zorro win the day, all the taxes back for the paupers and his closing sex scene with Maria?

This little work of sexploitation cinema, as written by David Friedman, who produced umpteen sleaze epics such as Ilsa, She Wolf of the S.S. and roughie The Defilers, is a bit of a mixed bag. I didn't find the sex scenes to be particularly stimulating or well-filmed. There's a few of them, but they seem to dissapear at about the mid-point of the film. There also seems to be somewhat of an opportunity missed for a big sex scene at the end, instead the film seems to kind of fizzle out. On the positive side of things, Bob Cresse is always entertaining as the frustrated Sergeant, mumbling exhortations to his bumbling brigade to "endale, endale" and then throwing in a German ... "raus!" - I guess he was channeling his Nazi character from Love Camp Seven. I enjoyed the gay Diego, with his bobbing head and ever-present, waving handkerchief. Douglas Frey seems to be having more fun with this side of the character than the boring old straight one. There are a few low-brow laughs to be had here and there with Friedman's script, but it often has long stretches of seriousness too. Still, as I mentioned earlier the film looks good - it's made with quite a bit of care and expense, so couple that with some amusing performances and I'd have to say it's worth a look. Any regular reader of mine will know I'm biased to the seventies era, but I do believe this time in film-making brings an intrinsic entertainment value to any of it's films.

Some okay sex scenes, a couple of genuine laughs in the script and occasional fun with a couple of the characters later, and I'd say you've had a worthwhile view. Best to approach it as a minor film in the American sexploitation pantheon, and you may well get quite a bit of enjoyment out of this one. I did wish there was a swordfight with a scantily-clad blonde with a Z-for-Zorro mark on her backside, as seen in the poster art. Sadly, no such luck this time.