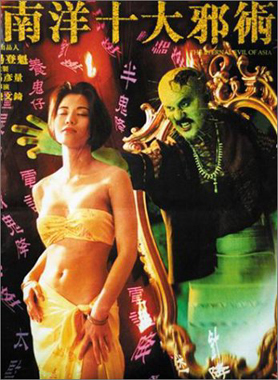 I love a good Hong Kong romp. There's so much entertainment value in these "category three" gems that it's hard to go past them on Girls, Guns and Ghouls. What makes them so darned fun? Well, they generally mix supernatural or science/fiction elements, smatterings of violence, sex and nudity, and a particular goofy humour which is probably a bit of an acquired taste. But hey, this is a particularly enjoyable example of this sector of film-making and worth an exploration on these pages. So what's it all about? Is it an analysis of the depth of evil in all of Asia? Well, perhaps not. Let's take a look.

In Hong Kong, a man is driven to murdering his family and then suicide by visions of his dead parents, then the ghosts of his slashed-up, slain family. A strange man is on the sidelines, seemingly orchestrating events. The dead man's friends are all at a loss to explain the tragedy, but Hairdresser May's (Ellen Chan) boyfriend was part of a trip to Thailand which seems to be connected. When her boyfriend, Bon, (Kwok-Pong Chan) becomes impotent, something seems to be up, as it were. A hairdressing client who is also a Thai witch senses an enchantment at work. Time for an explanatory flashback.

As mentioned before, the group of friends went on a trip to Thailand. With carousing on their mind, they went to a brothel, but were chased out by the irate owners. Storming the house of a wizard Laimi (Ben Ng),for shelter, one of them is given the head of a penis as punishment for an arrogant comment. A funny scene! They then witness an amazing magic fight to the death. Two enemy wizards, a male and a female, use copulation as one of their power enhancers. This is achieved through "wire-work" and you do need to see this scene! Finally befriended by Laimi, they meet his sister. The sister promptly falls in love with Bon, asking Laimi to grant her the favour of a hex which will seduce the object of her affections. Sadly, this hex fails and the other three friends - minus Bon - end up seducing Laimi's sister. As a result of this catastrophe, she ends up dead and Laimi vows revenge.

Back to the present, and another friend ends up dead after being afflicted with a supernatural hunger, eating not only parts of other people, but his own hand. These scenes are all done in a tongue-in-cheek fashion. May's brother, one of the Thailand group, ends up dead but resurrected as a type of pin-head type zombie (pictured above), and he's one of the best-known images from the film. This creature isn't around much, though, and is swiftly despatched by the Thai Enchantress. In the meantime Laimi's lust for revenge, causing him to become steadily more evil, is also becoming a lust for May.

I've got to recommend this one, folks. The imagination at work is all through the film, and its well worth a view. It's got that goofy humour throughout, bear that in mind, as my plot description sounds pretty serious! The sex scenes are few, but effective and actually advance the plot, the makeup and ghosts are suitably gruesome, especially the pinhead creature. Acting is generally over the top, but Ellen Chen as May certainly has charisma and of course, beauty as well. It's hard to blame Laimi for falling for her. The soundtrack is what I would call cheap heavy metal, but suits the proceedings. It doesn't detract from it, anyway. If you don't mind a light touch (and it's a touch from Hong Kong at that) to your horror and fantasy, please give this one a look. It's really quite a lot of fun.

And there aren't many films where you can see a man with a penis for a head. Who wets himself with fear, by the way ...