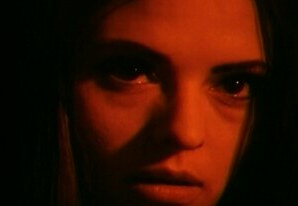 This collection of reviews has been languishing for a while since late last year, but at the start of 2005 it's time to make amends. Strangely, my writing of reviews always seems to drastically taper off towards the end of the year and resume early the next one. Anyway, I'm a bit of a cult actress Soledad Miranda and cult director Jesus Franco fan, so this pairing is a nice way to start things off for 2005.

I'll say at the outset that I don't think this Marquis De Sade adaptation is their best collaboration. I have no idea how faithful this is to De Sade's original novel, I must add. Much as Franco fetishises Miranda, I don't think here she's used to her best effect. She Killed in Ecstacy is my favorite Miranda/Franco movie, mainly for Miranda's intense, despairing performance in that one. It's a classic, I assure you. I hope to review the well-known Vampiros Lesbos soon. However this one does have its moments. Let's explore those moments, then.

The nudity and sex starts about two seconds in, as Eugenie (Miranda) and her stepfather Albert de Franval (Franco regular Paul Muller, also found in Lady Frankenstein) seduce and strangle a young woman. We see that we are watching a projected movie that Albert has filmed, and that obsessed writer Attila Tanner (Jesus Franco) has been watching it. Tanner then drives to a hospital where the once-fatally wounded Eugenie is seemingly recovering. He asked her to tell him her story - she agrees but only if he kills her at the end of it. He reluctantly agrees.

In whispered tones, we are told Eugenie's story. In France, she was raised entirely by her stepfather, who was a famous reclusive writer. Her mother had died when she was born. As a young woman Eugenie found an erotic book of her father's, and was entranced by it. Albert found out she had been reading it, and now believed it was time to bring the sex-starved Eugenie into his way of thinking. She is willing to completely obey, having being exposed to no other positive example. The insane Albert has the perfect plan for a sensory experience - murder. They travel first to a seedy club typical of Franc's sensibilities - virtually every Franco film has a seedy club scene - then to a den of photographer's models.

Dressing in ludicrous red outfits (Eugenie in massive Elton John-like sunglasses), they hire a model, but then on Albert's demand, Eugenie murders her in an S and M photoshoot. They then go back to the club as if nothing has happened. Fellow author Tanner is on their trail though, harrassing the killer pair at a literary party. To no avail, as Albert and Eugenie pick up a scatterbrained hitchhiker and kill her too, after the silliest drinking game and striptease I have ever seen! Finally, the two have sex, erotically charged by the depraved, murderous goings-on.

Of course, the murder cannot stop. This time they plan to kill a young man, a saxophone player at the club they frequented before. Eugenie picks him up, but before the plan can take effect she finds herself falling in love with the initialy cynical, but sensitive man. She try tries to reject him, calling him an inept lover, fearing her insane stepfathers wrath. Earlier in the film Albert had confessed to killing her mother for faithlessness, and being prepared to kill her too, if she betrayed him. Her pure love for Paul (Andres Monales) places her in jeopardy. Albert finds out what is going on in due course, and kills the sleeping Paul with a straight razor. He then confronts Eugenie with a pair of scissors, mortally injuring her. You'll wince in this scene. The crazed man then commits hari-kiri with a samurai sword. Eugenie then completes the story in hospital with Tanner, finally meeting her ultimate fate.

You can't mistake a Franco film. This has all the hallmarks. Great, distinctive jazz music plays throughout, although the "Eugenie" them is overdone a bit. Miranda and Muller put their all into it, although in this one Muller doesn't have the presence somehow to pull it off. He just somehow seems too frail to convey such a frightening, twisted creature. That's just me, though. Soledad is Soledad - there's something incredibly sad about her that touches me. It's not just that the actress was killed early in life. There's just a little look in those dark eyes that sets me to shivering. She's an especially sad character here, realy just a pawn of her sick "father", who has groomed her from birth to be his "ideal mate". She sits in a certain way several times in the film, knees up with her arms around them, that just suggests a frightened child who needs love. You just know she's not going to escape Albert's clutches and find true love and normality with Paul. I won't say exactly what happens at the end, just see for yourself. I love these films, and can't wait to get a bigger Franco (and certainly Soledad Miranda) collection. The director features quite a lot in this film as Tanner, but all he really seems to do is harrass the odd pair and listen to Eugenie's confession. I did't find the film overly erotic or offensive - certainly the blood effects are limited to daubs of red paint - but as an exercise in style, sickness and sadness, it works completely.

Not my favorite Franco vehicle, but nonetheless, highly recommended.