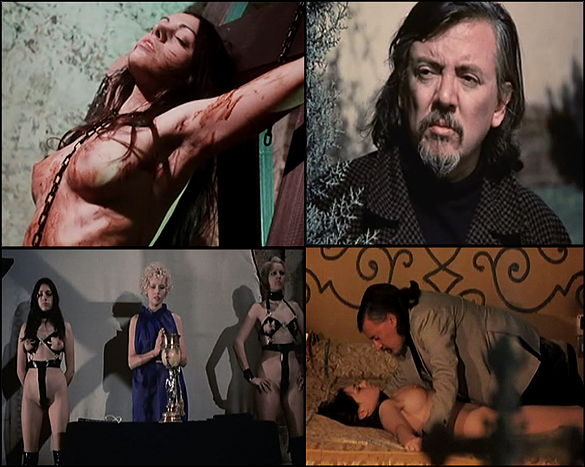 Jesus Franco has contributed countless hours of entertainment to the pantheon of cult cinema. Though not on the level of artistic merit of his Succubus or Venus in Furs, Exorcism is still extremely fun to watch and possibly the only time where the man himself takes centre-stage as the main character. And what a character he is. Franco's insane, defrocked priest Vogel, is a memorable nutter for the ages. For those of you who like female flesh on display, Exorcism must be the ne plus ultra of the naked-women-hanging-in-chains genre. I think most of the film's budget went at the local hardware store with all the chains on view! Franco's muse Lina Romay also features, and is her usual uninhibited self. Let's take a look at the film and see if any actual exorcisms take place.

The first scene is our Lina hanging naked on a flimsy cross in some kind of dungeon as another blonde woman, virtually naked but for tiny leather straps, begins to torture her. A group of lascivious bystanders sit around the room and watch with interest and arousal. A few light whips and nail-scratches later, and the mysterious woman then beheads a white dove and drains the blood into a ceremonial goblet. I'm not a big fan of animal cruelty in films, and thankfully that is the last we see of such things in tonight's film. The woman forces her victim to drink the blood and then begins seducing her into satanic delerium. Finally, a knife is drawn and poor little Lina is stabbed to death. Or is she? We soon see that it's all a bizarre nightclub act as the two women laugh, and hold hands at the crowd's applause.

The owner of the nightclub, Pierre de Franval (Pierre Taylou) also publishes Venus Magazine, an underground paper which Mathis Vogel (Franco) contributes sado-masochistic stories for. One day Vogel meets Pierre at his office to submit a new story, and the awkward man meets his friend Anna (Romay) who was performing last night at the club. The topic comes up about how Vogel is a defrocked Catholic priest. Vogel confirms this. After a few socially inept moments the clearly uncomfortable author leaves, but not before overhearing about how Pierre and Anna are going to stage a 'black mass' in the near future. Of course, it's all for laughs, but the obsessed ex-priest only hears the black mass part. The stage is set for the mayhem to ensue. Suspicious and becoming obsessed with Anna, Vogel rents an apartment next to hers, and spies on her and Martine (Catherine Lafferičre), Anna's partner from the 'performance' at the nightclub. He goes into sweaty raptures as he watches Anna and Martine in naked Sapphic embraces.

Dejected and lonely, Vogel goes into a bar late at night and picks up a prostitute. They quickly go back to his real place, a mansion in the city, which even has a private chapel. Things become tense as Vogel's judgement of her sins begins to come to the fore. Mockingly, the girl mentions something about a 'black mass' she's been taken to. Vogel goes berserk, dons some priestly vestments and chains the naked girl up. Claiming he's going to exorcise her, he tortures and kills her with a knife - not before extracting a confession as to where the next black mass is going to take place. Vogel turns up and horrified, watches the debauchery. Hanging upside down, a naked woman has her crotch stabbed by the presiding Satanic Queen known as 'The Countess' (France Nicholas), flanked by Anna and Martine in bondage outfits. Vogel flees in digust. Later the master of ceremonies introduces the victim, very much alive, to the crowd in attendance, who then proceed to have a soft-core naked orgy.

Vogel then tracks down, and enters the house of the Countess and her rich husband. He subdues the man with chloroform and kills the sleeping woman, Franco giving us a gore scene as he disembowels her. He then stabs the unconscious man to death. In the meantime a police inspector is on the case of the murders, Inspector Tanner (Olivier Mathot) but questioning a local thug gets him nowhere. He then questions Pierre, and begins to get somewhere. He tells Pierre that Vogel is actually an escaped lunatic from Germany, as well as an ex-priest. Meanwhile we're treated to an S & M scene where the master of ceremonies is revealed to be a masochist who likes to be treated like dirt by his mistress when having sex. When he leaves Vogel enters the room and kills her. Still obsessed with Anna, he visits her at night, chloroforms and drags her back to his mansion. He claims to love her and not want to kill her - even though he's going to 'exorcise' her of Satan's influence. Pierre and Martine, now lovers, sense something is wrong when Anna disappears for a couple of nights. Vogel is doing his exorcism rite with Anna, who is now naked and hanging in chains at his mercy. When Vogel visits Pierre again at the office, he believes he can draw the lunatic out and rescue Anna. He tells Vogel about the black mass he's staging that night. Vogel flees the office in a lather, not before saying he'll be there. Inspector Tanner investigates Vogel's house but is ambushed by the maniac, knocked out and left for dead.

Back at the nightclub, Martine leads the faux-satanic mass this time, and motions to 'kill' another victim but Vogel gets to her first and as Pierre screams, kills her. Vogel flees with Pierre in hot pursuit. Vogel returns to his home, unties the still-living Anna and flees with her in a clapped-out car. The now-recovered Tanner and Pierre corner him finally, and Tanner pulls a gun. Firing a warning shot - with a weaker-sounding 'bang' than my old cap-gun could make - Anna's fate will be determined by who has the stronger will, the lunatic ex-priest or the force of the law…

Well folks, if you were looking for projectile vomiting, spinning heads or levitation you'll be sorely let down by Exorcism. In fact, this film is not about exorcism at all. Appearing under many titles and I gather, many different versions - there's hardcore variants out there as well - this is pure sleaze and exploitation all the way, Jess Franco style. With an insistent 'Vogel' theme weaving it's way through the film by André Bénichou and Daniel White and constant cutaways to swans, birds and scenery, it's unmistakably a Franco film, and all the better for it. I'm not exactly sure where the film is set though. The killings nudge the film into the horror zone, especially the Herschell Gordon Lewis-like disembowelling of the Countess. Nonetheless, the main reason for this film to exist is to show naked women being whipped, scratched, smeared with blood, made love to, indulging in orgies, being dominatrixes and being kidnapped and ravished. With an obviously small budget Franco does well with his sets, and seems to have access to an endless supply of castles and mansions. It is Europe, I guess.

Franco does well in his central role as Vogel, one moment fierce, murderous and righteous, the next world-weary, the next crying and gibbering at the thought of 'exorcising' the one he loves, Anna. I don't know of many instances where Jess took the lead role, usually he just plays simpleton bit-parts or cameo victims. He certainly can carry a film but whether he could have taken a heroic role is anyone's guess. Lina Romay is as cute and uninhibited as ever, and while she doesn't have the presence of Soledad Miranda - who does? - her energy, sexual presence and enthusiasm is a high point of many a Franco film and Exorcism is no exception. The rest of the cast are adequate but it's Jess and Lina that carry the proceedings. The bumbling inspector characters don't really add anything during the main part of the film but do cause the chase which concludes it, so I guess they have some relevance in the end.

To finish up, if you enjoy Franco's films and the atmosphere he creates, you'll get something out of this one, there's nothing surer. If you're anti-Franco or even fifty-fifty, this one won't convert you. It's roughly made, nonsensical at times and wall-to-wall sleazy. I'm sure you can tell I'm on the pro-Franco side and I adored Exorcism. Definitely recommended.