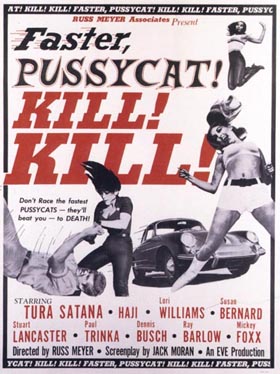 Also know as: The Leather Girls
The Mankillers
Pussycat

This is maverick filmaker Russ Meyer, pretty much at his best. Always popular in cult-movie circles or at least appreciated, I've been a fan for quite a while. If only it wasn't so hard to find the damn films, or so expensive when you can! When you can see a Meyer opus, go for it, because they're quite unique, neither action, thriller, comedy, moral melodrama or softcore porn, just a bizarre mixture of all of the above, plus more. He also incorporates amazing editing, dialogue, colour and, of course, huge-breasted women into the mix to come up with something unforgettable.

Having said all that, "Faster Pussycat, kill, kill!" is somewhat of a departure or more a precursor in a way, to this description of the Meyer style. It's in black-and-white, and there's no nudity or explicit sexuality in the film. The breast-factor is certainly in evidence, especially with exploitation icon Tura Satana. Lack of nudity, however, is not to say it's not worth watching, there's an abundance of visceral energy and performances throughout. Tura plays Varla, the hot-rod driving go-go dancer with a mean streak, a mile wide. She's adept at karate, more than a match for any man. Once you see Varla in action, you'll know you've seen a worthwhile film in the pantheon of cult cinema, or however you like to describe this stuff.

Varla, and her fellow go-go dancers Rosie and Billie, played by Meyer regular Haji and Lori Williams respectively, like to drag race their hot-rods out in the desert. Rosie is Varla's sometime lover and Billie just likes to hang around for the fun - she's sort of the loose cannon in the trio. The group encounter a "square" couple Tommy and Linda, who also like hot-rodding and after a fight, Varla breaks the man's neck and kills him. Kidnapping the bikini-clad Linda, played by the comparatively tiny Sue Bernard, they encounter a strange family in the desert - an wheelchair-bound, lecherous old man, and his two sons, "Vegetable" and "Kirk". Vegetable seems to have a mental retardation but Kirk is "normal", as far as we know. The old man reputedly has a stash of money hidden which Varla is keen to get her black-gloved hands on.

As the story progresses we soon realise that the old man is a psychopathic old lecher, who has designs on Linda and who uses his sons as pawns to this end. He's as bad as Varla. The stage is set for an all-out confrontation between the three girls and the old man's family - but Kirk briefly has a fling with Varla, before he realizes how dangerous she can really be. It's great to see scenes of men and women fighting on equal terms for a change! Varla can really handle herself, and practically obliterates Kirk towards the end with her martial arts moves. In the end only two people survive to walk off into the sunset, but they are forever changed...

The beat-like dialogue of this film is always a joy to the senses. Billie : "You really should be AM and FM. You one-band broads are a drag!" Varla's response to the old man claiming he is forever tied to a wheelchair : "better you should be nailed to it!" There's more gems, but I don't want to spoil any of it for you. Best you hear the "music" for yourself. Tura Satana maybe never had a role quite as effective as Varla, but let's be glad she had this one. She makes it her own and probably the film would not have garnered half the attention it has, if it wasn't for her presence. Haji is pretty much set-decoration but looks great, and Lori Williams is a treat with much of the dialogue centering on her crazed lust for the muscular, but unresponsive "Vegetable". The ending is classic Meyer in terms of camp morality, with only two "good" survivors remaining after the titanic clash. Violence and sex are his canvas and everything else has to work, and does, within this framework. Particularly effective is the music, from the opening title track to the jazz seeping through the film.

I thoroughly recommend this film to anyone interested in getting into Russ Meyer's works. He's probably one of the most well-known "cult" film makers but he's earned most of the attention. The films offer more than just soft-core sex - you're getting a unique cinematic vision that most Hollywood bore-a-thons don't offer. As they progressed they mutated into total boob-sex-crazy-fests - not that that's a bad thing! - but you can see the common threads throughout, and none disappoint.

Watch with an open mind, it's a relative oldie, but most assuredly a goodie.