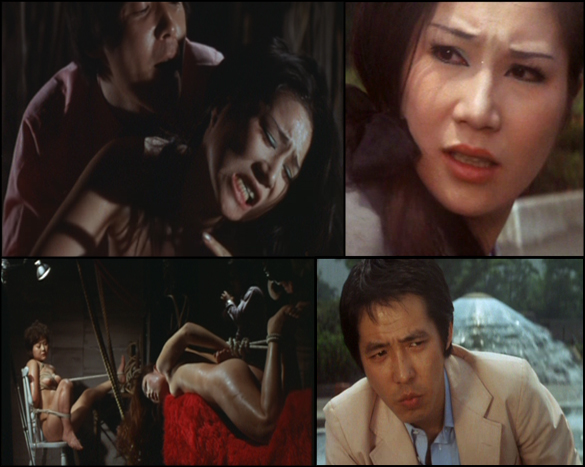 Also known as:
Hana to hebi

If you have the slightest grain of feminist outrage in your being, I'd recommend being very wary of watching this Nikkatsu production of Flower and Snake, directed by Masaru Konuma. From a first view women certainly come off second best in practically all respects. It's possible to read in aspects of liberation for women but it's a bit of a stretch, a word which could apply to much of the proceedings in this Japanese bondage extravaganza starring the beauteous Naomi Tani. Having something of a Naomi Tani fetish I couldn't pass this one up, whether it outraged me or not. So assuming we're happy to watch naked women being tied up, abused and exploited in unimaginable ways by sweaty, creepy guys, let's proceed. 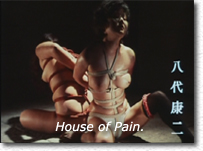 Before the credits roll, we see a Japanese woman having sex with a black guy. He begins to strangle her, then her son, probably about ten years old, walks in on them and trying to protect her, shoots him with a pistol. Her staggers forward and tries to strangle him. Years later and the adult Miyo (Hiroko Fuji) awakens from the recurring dream of the past. He visits his mother in the basement, and she and some other guys torture girls in bondage. She asks the girls to act like it hurts more as the customers like it. Later Miyo and his mother Makoto (Yasuhiko Ishizu) have dinner. He doesn't like being treated like a mother's boy. Makoto reminds him that he's impotent, and that she got him a job with the boss, Senzo (Nagatoshi Sakamoto). 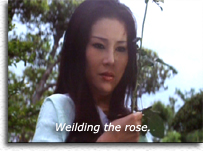 At work, Senzo has found Miyo's bondage pictures in his desk. Miyo is called to Senzo's luxury house with it's ornate rose gardens. In the gardens, Senzo is molesting and raping his servant girl. She hates it, but goes along with it. He gives her a mini-enema, and she staggers off, needing a toilet. He tells her to blame his wife Shizuko (Tani), who rejects him. As the naked Shizuko dries herself off from having a bath, Senzo enters the house, demanding his conjugal rights, but she throws on a kimono and runs off. He chases her into the garden but she hits the weasely older man with a torn-off rose, slashing his face. Since Senzo can't stand the sight of blood he staggers off, bleeding from multiple gashes. Later, Senzo meets with Miyo. He shows him the pictures he found in the desk and demands that he helps him. The task is this: kidnap his wife, torture her and make her submissive enough to acquiese to Senzo's demands. One of the tasks is to give her an enema and take pictures so that Shizuko is forced into silence. Nice! And we can see some kind of pattern forming here with the enemas... Eventually the blackmailed Miyo agrees to the outrageous quest Senzo asks of him. 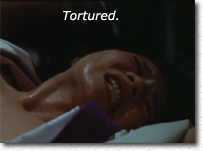 At a party, Miyo slips sleeping tablets into Shizuko's drink. As she collapses, he and Senzo take her away to Senzo's car. Driving off alone, Miyo looks deep into Shizuko's sleeping face and as she begins to awaken, seems to begin to fall for her. He has a vision of Jimmy, the black man in his dreams, gazing accusingly in at them. Later, in Makoto's torture-basement, Shizuko awakens completely to her situation. She's understandably horrified. As Miyo hesitates, Makoto joins them and Miyo explains whet Senzo's asked of him. Makoto seems to understand and want to join in. She encourages Miyo to give the tied-up, semi-naked woman the huge enema. He does it, and before the suffering woman disgorges her burden, Miyo takes the required photos then catches her excrement in a plastic bag. Then, turned on by the whole bizarre proceedings he gleefully rapes her, finding his manhood at last.

Now that Shizuko is caught in Makoto's clutches, her torture continues. Tied, blindfolded and tickled with a feather, her suffering is only beginning. She's then hog-tied and force-fed saki, only to be suspended on ropes and forcefully rubbed in her nether-regions with some sort of brown muck that makes her uncontrollably itchy. As the torment continues, Miyo tells the group of abusers to go away, then eases her suffering by raping her initially, but she eventually begins to enjoy it. I'm sure all feminists have long since pressed the stop button. Though still constantly tied up, Shizuko begins to fall in love with Miyo and he, her. Makoto is not impressed, and Shizuko is aware of this, though Miyo doesn't believe his captive's theory that his mother wants to kill her. Makoto sets up Miyo to discover Shizuko being raped by a black man. He relives his childhood experience, trying to shoot the stand-in before being mock-strangled. Distraught, Miyo finds he's impotent again. He tries to have sex there and then with Shizuko to no avail. Depressed, he will still keep Shizuko and continue with 'the project', even though Senzo is getting more and more impatient for a result. In the 'real world', Miyo runs into the servant girl and she tells him how Shizuko was sold to Senzo by a former boyfriend. The girl also mentions that, addicted to Shizuko, she would follow her anywhere in the world as Shizuko is a goddess to her. Miyo then proceeds to rape her. 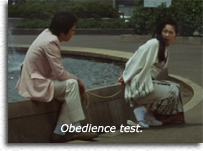 As Shizuko is desperate to leave the basement at least for a while, Miyo takes the captive woman to a cinema where they watch a pornographic film of a black man having sex with a white woman. Miyo get's distressed, then finally has a liberating memory. It was his mother who shot 'Jimmy', not him. He feels free from a huge burden. Nonetheless, he's still sad that he's impotent again. Later in a park, he reluctantly lets her off the rope he's kept her on, so that she can urinate in some bushes. Lying down on the ground, the despondent man doesn't expect her to come back, but is overjoyed that the smiling Shizuko does in fact return. He phones his mother and torments her with the sound of their public sex in a phone-booth - Miyo has found his manhood again. Her plans to dominate him have failed.

Returning to Miyo's home, he and Shizuko are intercepted by an angry Senzo and his henchmen. He demands that his wife return. Surprising both men, Shizuko agrees to return home with her husband. She tells Senzo that Miyo has made her 'The Slut' that he has always wanted. Miyo is heartbroken, then Shizuko invites him to join them. Senzo doesn't seem to mind. Makoto turns up and demands that Miyo stay with her and grabs on to him. Miyo shakes her off and jumps into the leaving car. He looks at Shizuko and Senzo, unsure of the future, but happy to see his hysterical mother, who's running after them, recede into the distance. Back at the house, the servant opens a bedroom door and is shocked to see what her returned Goddess occupies her time with ...

From the outset, it's obvious these types of films treat rape as basically a given right of the male. We'll have to deal with that, so we can we watch Flower and Snake in an objective way. Do women come out on top in the end? It's hard to say whether Shizuko's spirit has been broken or whether she's discovered another side to herself that she likes to indulge. After what weak, self-indulgent men do to her, it's hard to know whether her mind has snapped or whether she just accepts she can't be free in this oppressive world. Even another woman, Makoto, exploits her for her own business, and wants to control her and her son, another controller! It is remotely possible that Shizuko feels in charge of her situation at the end, even the master of it. Just watch her last conversation with the servant girl - the last scene of the film - and decide for yourself.