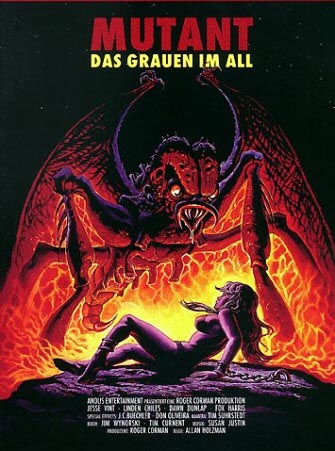 This film, otherwise known as Mutant, is a quite enjoyable little exploitation piece, produced by the redoubtable Roger Corman. It's basically an Alien rip-off, but seems to wear its "rip-off-ness", if there is such a word, so openly on its sleeve that I couldn't help but be taken by it.

We start with a little space-ship fight, with all the cheap laser effects that Corman could muster, following our intrepid (and pretty arbitary) hero Mike (Jesse Vint), and his female robot, SAM-104, as they finally land on the planet Xarbia. SAM is not a sexy robot, by the way, she looks more like a Star Wars stormtrooper to me. A group of scientists living on this planet are conducting experiments involving gene splicing, in order to come up with a solution for a "galactic food crisis". What do they come up with, our little friend "Subject 20", who lives in a slimy cocoon, only to emerge and eat one of the scientist's faces when they're alone with it. Subject 20 starts off as a shapeless blob, but the more humans he consumes (I assume it's a he) the more familiar a clone of our toothy friend Alien he becomes! The only thing is, in his cheapness he can't move an inch, the creature is pretty much an unmoving prop, as immobile as the motor-less octopus in Ed Wood's Bride of the Monster. It's up to the editing to make it sort-of seem like he's moving. And folks, sometimes it just don't work.

In the midst of the carnage, Mike is sleeping with both Dr. Barbara Glaser (June Chadwick) and Tracy Baxter (Dawn Dunlap) in a couple of pretty steamy sex scenes. In fact, one scene is actually in a steam-bath so it kinda has to be steamy, I guess. Lucky shmoe, he's not even made out to be a two-timing cad, what a future world to live in! As the scenes of naked flesh and gore multiply, we find out that one of the original scientists, a woman, had given herself as a test subject to incubate this creature. In addition, the creature is a mixture of human and experimental genes, and of course, killed it's mother upon birth. Dr Cal Timbergen (Fox Harris) is, it's revealed to us, dying of an inoperable tumour, which will play a part in the gruesome climax. It's an exploitation finish to remember, I tells ya.

One of our heroines meets a bloody fate, as the blonde-tressed Dr. Glaser tries to convince Tracy to help her communicate with the monster. (Strangely, she does her convincing naked as they both stand in a steam-shower...) They hook the unmoving mutant up to a computer and communicate a few words back and forth. Needless to say, the attempt to reach the creature peacefully fails in the end, and blood flows. Actually, it sprays this time.

Since Mike is such a useless hero, as all he does is stand around and observe the proceedings - or have sex - it's up to Dr. Cal and his friendly tumour to save the day! How is this accomplished, you ask? You'll have to ride out the film, Bwana. All I can say is that some meals don't agree with some mutants. Mmmm, mutant-vomit....

All in all, I'd recommend this one if you're in the mood for some serious schlock. It's not from my favorite era - that's got to be the seventies - but it's got so many charms, that I just couldn't pass it up as a pure exploitationer. There's a lot of slime on display here, gentle readers, slime, blood and of course, the odd bout of writhing naked bodies. So sit down and revel in it all, and indulge in whatever assists your typical schlock-viewing experience. I think you'll have a good time.