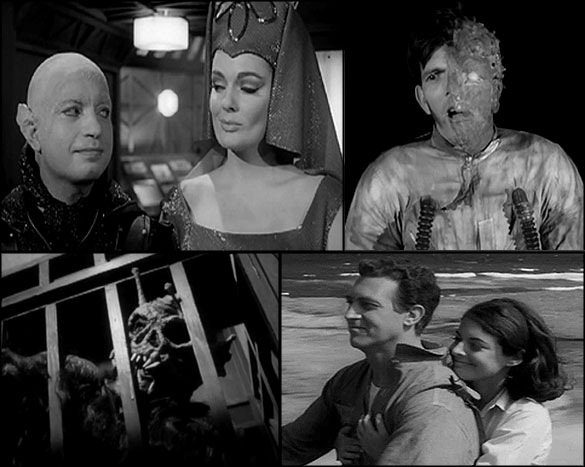 It’s an enjoyable process writing about all forms of cinema, and I’m not doing the cause of cult movies justice if I don’t ever cover innocuous little romps like Frankenstein meets the Spacemonster. Shot in Peurto Rico, this could be seen as the film Plan Nine from Outer Space could have been if Ed Wood Junior had possessed a bit more technical nouse. Along with classic pointy-eared aliens, a scarred and disfigured robot protagonist and a wild, shaggy space monster, you’ve also got a nice set of songs from the Distant Cousins … a sort of very early Beatles-esque sound. You’ve also got the oft-told “Aliens needs women” storyline as interpreted by director Robert Gaffney to entertaining effect. Still, I hear you ask, what about Frankenstein? You didn’t mention him … well, I’m afraid there’s no Frankenstein to be found per se in this film, unless you count a humanoid robot called Frank who has half his face blown off by an alien weapon. Hopefully you’re still entertained by the end of the story despite the absence of the neck-bolted one.

NASA has a new program to fulfil – sending up complete replicas of human beings to explore the galaxy. Colonel Frank Saunders (Robert Reilly) is the beginning of this program and has most of a press conference fooled until he freezes due to some internal malfunction. His inventors and keepers Dr. Adam Steele (James Karen) and Karen Grant (Nancy Marshall) take him away for repairs. Despite the NASA bigwigs misgivings, they send successfully send Frank into space. Unfortunately, that’s where his troubles start. There is a Martian space ship in our atmosphere. Alien Princess Marcuzan (Marilyn Hanold) and Dr. Nadir (Lou Cutell – Pee Wee Herman’s Amazing Larry!) are leading a group of survivors from their war-devastated planet. There’s no mention of the word Mars anywhere in the film but apparently it was all over the official publicity at the time so let’s say they’re Martians. Thinking Frank’s ship to be a missile fired at them, they blow him out of the sky. Crash landing back to Earth, Frank is set upon by the Martians, who have now landed. These aliens, other than their pointed ears, look like humans and are basically dressed as astronauts. Still, they perceive the downed Frank as a threat and fire at him with their laser guns, which succeed in charring half his face beyond recognition and sending him into a crazed state.

Thinking the Earth threat abated for now, Marcuzan and Nadir begin implanting their plan. After a nuclear war which their side won, Mars has been depleted of women and apparently, Martians and Earthlings can inter-breed as the aliens want to take Earth women back to begin their race anew. Although, Princess Marcuzan doesn’t seem to be putting her hand up to contribute to the breeding program. They go to the Puerto Rican beach, disintegrate one guy and kidnap a bikini-clad woman. Once inside the saucer – which seems to have the TARDIS effect of being much bigger inside than outside – the woman becomes strangely compliant and does whatever they ask. Perhaps some kind of alien hypnosis? At any rate, she passes their examination and Marcuzan and Nadir decide to go ahead with stealing more women.

In the meantime, Frank, or shall we now say in his new monstrous state, Frankenstein – has become a mindless killing machine, killing one couple in a stalled car and attacking another hapless guy with a machete. Adam and Karen are on his trail, thanks to a tracking mechanism built into his innards. They finally find the crazed creature in a cave and manage to subdue and repair him. Still, we know that since Frank’s killed innocent people he’s probably not going to make it at the end of the film. The aliens steal a whole bunch of women from a pool party – again, the women don’t put up much fight and go along very peacefully! I guess they went into shock at seeing their men blasted to atoms by sinister alien technology. Princess Marcuzan and Nadir then send the women into the testing phase, which consists of them lying on a moving board, being covered with a flimsy white sheet and sliding into an unseen chamber. There, they either ‘pass’ or ‘fail’ and are kept or disposed of. Meanwhile, Karen’s abducted by the aliens, with Adam and the newly-lucid Frank taking off in hot pursuit. Nadir and Marcuzan attempt to interrogate her about the defences of Earth but she’ll say nothing, so they lock her in a cage next to ‘Mull’, the giant fur-covered, snaggle-toothed ‘Space monster’ of the title. This just sends the poor girl into a faint. Fortunately Adam and Frank are coming to the rescue. Locating the Martian saucer , Adam calls the army and Frank enters and attacks the aliens. Nadir releases Mull and we’re witness to a clash of the Titans – truly a Frankenstein meets the Spacemonster. Will Frank(enstein) overcome his savage nemesis and destroy these woman-stealing invaders? Will Earth be saved to renew their space exploration? I’d better not give too much away.

For pure entertainment value Frankenstein meets the Spacemonster. has a lot to offer. I love the banter and glances between Princess Marcuzan and Dr. Nadir. I’ve tried to capture that in the screenshot above. Truly sinister! Lou Cutell’s chemistry with Marilyn Hanold is top notch. It’s a pity Ms Hanold hasn’t done more onscreen as she has an undeniable presence as well as great beauty. She appeared in The Brain that wouldn’t Die according to most sources but I can’t remember her role in it. There’s also a palpable romantic chemistry between James Karen and Nancy Marshall. They seem to be genuinely enjoying their scooter ride through downtown Puerto Rico, with Nancy happily clutching James as they tour around accompanied to the soothing music of the Distant Cousins. I wonder if there was a real romance going on behind the scenes? As far as performance goes, Robert Reilly’s Frank really is just a prop for the burned robot makeup – which strongly resembles Batman’s Two-Face villain - but it wouldn’t be the film without him.

As with a lot of films of this type, there’s a lot of stock footage of rockets being launched, or the army mobilising and moving into position. But it’s actually quite interesting footage and doesn’t overwhelm or ruin the film. Director Gaffney’s captured a nice balance between serious and camp, and the cool music doesn’t hurt. And you’ve got the lurking spectre of Mull, always threatening to attack at any moment and it’s great fun when he and Frank finally come to blows. So let’s look at this thing from all angles. You’ve got attractive women - both Martian and Terran – obsequious, sniggering aliens, crazed, deformed robots, a great score, nice black and white photography and a savage, howling Space Monster from Hell. Okay, I added the Hell bit but you get the picture. It all adds up to a very entertaining package, and it’s even readily available on YouTube.

Summing up, I really recommend Frankenstein meets the Spacemonster. for those looking for pure unabashed fun from a bygone – and quite cool - era. Unless you’re a Frankenstein purist, because the man with the flat head is nowhere to be found. It does make for a catchy title though!