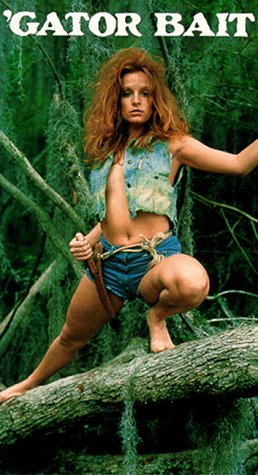 Sweet Lord A-Mighty, I've become a Claudia Jennings fan. I've known for years about the Queen of seventies drive-in, but only recently has my thirst for all types of eccentric cinema become so all-consuming, that I'm seeking out names from every recess in my mind. So here we go with Claudia heading up a fantastic backwoods-redneck-swamp-drama. I've seen this film cop a lot of negative reviews by folks out there, and I just can't understand why... I truly feel it's a little gem of drive-in exploitation that holds up in all areas.

I'm so sorry Claudia Jennings died so young (about twenty-nine, I think, in a car-accident) because she really did have a screen presence and after this, my first viewing of a Claudia film, I've watched The Great Texas Dynamite Chase and that's just as compelling in many different ways. More Claudia movies will be watched! Let's get back to the 'Gator business though.

Desiree Thibodeau (Claudia) is a Cajun women living in the Louisiana swamps with her kid sister Julie (Janit Baldwin) and mute little brother, Big T (Tracy Sebastian). They survive by poaching Alligators and snakes, keeping to themselves. As fate would have it, she's chased and harrassed in her boat by Deputy Billy-Bob and one of the redneck Bracken boys. After throwing a bag of snakes at them, the Bracken Boy is killed by Billy-Bob's stupidity - and his gun. The coward then tells his father, Sheriff Joe Bob Thomas (Bill Thurman) that Desiree was responsible. Soon the father and son "lawmen" are hunting Desiree along with the revenge-obsessed father T.J. Bracken (Sam Gilman) and his depraved sons, Leroy and Pete. We've already seen Pete try to rape his own sister in the mud of their swamp-shack, so we know that any female in their clutches is in for a rough time.

Soon enough, as Desiree and Big T are off hunting, Julie is cornered by the motley bunch and after a time of general humiliation, is about to be raped by Pete when Leroy kills her by shooting her basically in the nether-regions. It's a very nasty scene - that's all I can say, I can't even attempt to defend it. Apparently Leroy had attepted to rape Desiree in the past and lost his balls in the attempt - perhaps that's why he hates women.

Of course, when Desiree returns with Big T, they discover the death of their sister and revenge is in the offing. Now an avenging fury, Desiree is shown to be a capable hunter at the start of the film - now we really see her survival and battle skills. The pathetic villains are picked off one by one as Desiree turns the everglades against them. Once Billy Bob tells Sheriff Joe that he realy committed the crime, all Hell breaks loose. T.J. kills Sheriff Joe for misleading him about his dead son, Billy Bob is left to die from a gunshot wound, and soon only T.J. is left alive. But his presence caused the death of her sister - will the savage, vengeful Cajun Lass allow anyone to leave her swamp alive?

This film was somewhat of a revelation for me. I just loved the Bayou setting, the sweaty villains, the boat action, the banjo music and Desiree theme song that we hear at certain points. Let's face it though, this is all about Claudia. She just looks fantastic in her cut-offs and vest, looking wilder and more untamed each scene we witness. The picture I've used for this review is the greatest picture of any woman ever taken. There, I said it. She really is a force of nature, the men don't stand a chance against her in her swamp. The actors all acquit themselves well in a over-the-top revenge story, all taking their parts seriously and adding real emotion to the whole endeavour. Claudia doesn't get to say much, but when she does speak her semi-English utterances carry more than enough weight.

Don't believe all you hear or read, this is a most enjoyable film and while it's no Deliverance, keep an open mind and you'll enjoy your time in Desiree country. I don't know how easy it is to get a hold of it from your local video library, but it's well worth the effort to track down.

Now, If only I could get that theme song out of my head!