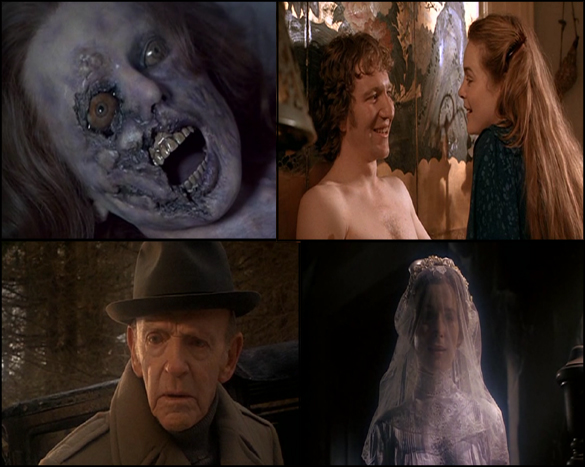 It's refreshing to watch a horror film where most of the protagonists are over sixty years old and not hot chicks in white singlets, the usual fare of the genre. Ghost Story is an adaptation of Peter Straub's novel of the same name, which I haven't read. Evidently there were some production problems as characters appear in the credits that don't appear in the film. I didn't really notice too many issues with flow, but the film does seem to miss a few opportunities, given the presence of makeup master Dick Smith on duty. Still, it does have a nice spooky atmosphere and Alice Krige as “the ghost”, as well as displaying her naked body throughout the film, conveys a sinister, perverse presence which is quite memorable.

Usually with these reviews I spend three quarters of the piece detailing the plot, but I'll try to hold back on that tendency. It probably gets pretty boring for the reader, as well as the writer. The chances are high you've probably already seen the film, and are interested in another person's take on it. I'll give you a quick run-down in case you haven't, just so what we're talking about makes no sense. Basically the film is about guilt – a guilty secret returning to not only kill the perpetrators, but the offspring as well!

Four old men comprise 'The Chowder Society', a group of friends who gather regularly to tell each other ghost stories, which seem to genuinely scare them. These friends are Ricky Hawthorne (Fred Astaire), Dr. John Jaffrey (Melvyn Douglas), Edward Wanderley (Douglas Fairbanks Junior) and Sears James (John Houseman). It seems that the fear these men generate is bringing back a ghost from their past, Eva Galli (Krige). Edward had almost become Eva's lover but failed due to impotence. When the four men descend on her home in a drunken state, Eva acts sexually willing amongst them all, belittles them and begins to tell the group about Edward's failure. Edwards lashes out and knocks Eva against a wall, rendering her unconscious. Fearing her dead and the consequences on their lives, the panicked young men accidentally murder her by drowning her in a dumped car.

Now Eva's back in the form of Alma, a secretary at Edward's son Don's (Craig Wasson) University. Don falls for her but soon dumps her due to her strange, cold behaviour. Then his identical twin brother David ends up engaged to be married to her, before seeing her in her true corpse-like state and plunging naked out of a window to his death. Edward also falls to his death in an icy stream after seeing a decaying apparition. Eva / Alma also stalks and causes the deaths of John and Sears, even using two human accomplices, a crazed man and a feral child, both of whom she is promising eternal life. Ricky and Don are left to fend for themselves against the evil spirit, before Ricky realises a way to put Eva's vengeful ghost to rest.

There's a lot to enjoy about Ghost Story. Director John Irvin uses a muted palette of browns, reds and the ever-present white snow, but it works well. Fred Astaire, as Ricky, for me provides the heart and soul of the movie. As a young man he was played as an ineffectual character who doesn't really hurt anyone and we don't want to see him meet his doom at Eva's hands. The rest of the men are less likeable but Ricky still has the pixie about him. Craig Wasson does a good job as Don, the University lecturer fallen on hard times, drawn away from his work and plunged into confusion and depression by his affair with 'Alma'. All the cast are good and it was a final film for many of them. We even get to see Patricia Neal in a cameo as Ricky's wife.

Still, it's Alice Krige as Eva / Alma that's the core of the film. Her presence probably makes it a must-see for fans of the horror genre. Undeniably beautiful, Eva also projects a savage sensuality and menace, when confronting and teasing the drunken lads she though were her friends. Post-death, she mixes ethereal beauty and evil in both her voice, and gently smiling face. I mentioned in the opening paragraphs that I felt some opportunities had been missed. Mainly in terms of the scenes with horror makeups. Dick Smith was renowned for his painstaking approach to realism with his work, and to see the ghoul effects just for a second or two with fairly static shots seems a waste. It's hardly a showcase. Why not longer, atmospheric shots that build, rather than a few short glimpses? I can't fault any of the performances really, and I guess we have to be grateful to see Smith's work in whatever form we can.

Did Ghost Story scare this viewer? Not really. The ghost of Eva does seem a fairly relentless force of retribution, even killing Edward's son in the process, which is a bit disquieting. I enjoyed the film more for it's uniqueness and older characters, than a particular frisson of terror. Alice Krige has not done all that much since, which is a pity as she's a fine actress not afraid to take risks. Worth a view to see some seasoned veterans going through their paces, as well as a memorable role for Krige. Not to mention those oozing, putrefying faces, supplied by a special effects legend in his prime.