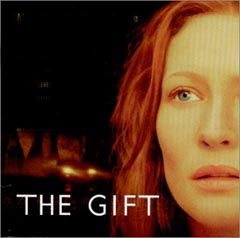 Director Saim Raimi has a history in the horror genre, and horror elements often surface in his films, with the exception of the baseball opus, "For love of the game" - not reviewed here, surprise, surprise. I wouldn't strictly call "The gift" a horror film, but at the least it's a mystery thriller with horror/supernatural elements. And, quite a good one at that.

Australian Cate Blanchett plays Annie Wilson, a widow in a small Southern town. Annie makes ends meet with card readings, because she has special skills of clairvoyance and extra-sensory perception - The gift. She's victimized by a brutish, bible-bashing Donny Barksdale (Keanu Reeves, cast out of type), who is beating his wife, Valerie (Hilary Swank), a customer of Annie's. When the unfaithful fiance of a local teacher is murdered, all evidence points to Donnie, who's eventually found guilty because of one of Annie's visions. But as the plot unfolds, all is not as it seems, and killers can lurk in the hearts of the seemingly meek, while the overtly violent may, in fact, have their own natural limits.

Billy Bob Thornton wrote the screenplay, which isn't particularly standout. It's really the cinematography and the acting that are the pluses here. Cate Blanchett lends a sensitivity and true feeling to her role, she's in most scenes and her performance rarely wavers. Giovanni Ribisi plays a pivotal character that supports a shattering storyline, and has one of the best "terrorizing the bad guys" scenes I've ever seen. It had me almost cheering! Keanu Reeves doesn't do a bad redneck, but I don't really see it as a huge stretch. Hilary Swank plays a victim again, well, mind you - but I'd like to see her play a character that comes out on top for a change. Katie Holmes and Greg Kinnear play their supporting parts with some conviction but they are more to keep the plot moving.

The film looks fantastic, the bayou scenes have a haunting, misty quality that lend a sadness to the proceedings. Raimi's make his mark with quirky photography and this film's a pleasant look back at his demon-infested forests through the eyes of a serious film. Annie's visions don't really take centre-stage but they're effectively filmed as short shocks. On the whole, I'd recommend this film to most lovers of film, just to see the strength of acting carry the film. Try to imagine less talented people in these roles, and you would probably be watching a pretty ordinary thriller.