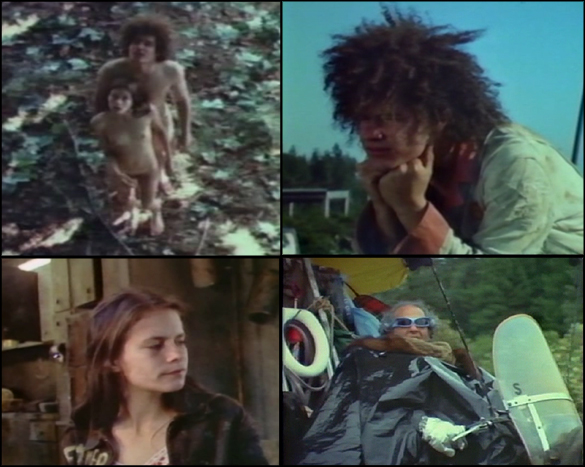 It’s funny how in different phases of your life, you can interpret a story in various ways, and take completely different meanings from a text – be it film, book, poem or song – each time. I viewed the dystopian sci-fi of Glen and Randa a number of years ago, and found it quaint and cute. Viewing it recently for this review, it came across as a melancholy, forlorn story of the end of humanity. Who knows why the different interpretations? This is not to say Glen and Randa isn’t a worthwhile film. It’s got quite a bit to offer if you’re in the mood, but it can leave a disturbing aftertaste. It was originally rated ‘X” on its release way back then, but other than some full-frontal nudity and sexual situations, I can’t see why.

In a ruined future world, teenagers Glen (Stephen Curry) and Randa (Shelley Plimpton) can be found naked and playing in a car that’s suspended high in a tree. We never get to find out exactly what’s caused the downfall of civilisation. It must have been big enough to send cars flying. Although they’re relaxed in their nakedness, Glen seems a bit grumpy with Randa as he wants to explore cities, and see what the people of the past were like. Randa believes there’s nowhere to go. Despite Glen’s petulance, they still seem to be a couple as the camera fades out on them having sex. Our next scene with the pair shows them clothed again, and running back to their group. They’re a sorry group of mostly-mute humans, scavenging for food, mainly cans, in the buried rubble of humanity. Into their midst comes a smart-talking travelling showman (Garry Goodrow) on some kind of cobbled together three-wheeled motorbike and caravan. He dazzles them with simple things like balloons and firecrackers in the hopes of fleecing them of a few goods. Most of the crowd seem slack-jawed and nonplussed, but Glen responds to the fast-talking huckster and takes himself and Randa into his caravan.

Glen and Randa are clearly naďve and as Glen’s exploring “the Magician’s” stuff, the huckster appears to take advantage of Randa offscreen, whom he describes as a “friendly little thing”. Once Glen comes back into the room, Randa looks unaffected by what’s seemingly taken place. Glen finds a map to a city, and is intensely interested. He’s already seen pictures of old-time city life in Superman comics. Leaving the Magician to himself, the two decide to leave their ramshackle tribe in search of a better life. Well, Glen decides and Randa reluctantly tags along. It soon becomes pretty obvious that removed from their tribe – who don’t have many clues – these two have even less of an idea how to survive. Glen can follow a map, but that’s about it. They discover a horse but don’t do much with it other than drag it with them. We quickly guess that Randa’s pregnant with her morning sickness. Barely able to take care of themselves, how on Earth could they look after a newborn baby?

They struggle on with their journey, with Randa spitefully burning all their matches at one point. Glen forces Randa to eat as she becomes sicker and more depressed. Glen manages to catch some salmon by hand – the poor fish in this scene, talk about a clobbering - and they make their way to the coast. There they meet an old man, Sidney Miller (Woody Chambliss ), who though odd, seems happy to take them in to his makeshift shack. Sidney survives by fishing, and the milk from a single goat he keeps. He tells the couple about the materials that are being sent to him from the city, ie driftwood. Okaay … we quickly get the impression he’s a few sandwiches short of a picnic. With some help from Sidney, Glen teaches himself to read and write in a rudimentary way. We see the old man’s got a small boat he’s been working on. Glen gets more and more impatient with Randa, and the zoned-out Sidney. Virtually forcing himself on Randa, as Sidney comes and holds her head in a disturbing scene – the two men realise that she’s going to have the baby at last. Unfortunately, the scene switches to the now-dead Randa, who has died in childbirth. Glen and Sydney try to feed the infant with goat’s milk, and decide to burn down the shack with Randa’s body in it, then take off in the boat, sailing out to sea and an uncertain future.

A few years ago Glen and Randa seemed like a whimsical little Adam and Eve tale that ended sadly, but on a small note of hope and renewal. I can’t really see it that way this time. Randa’s a victim pretty much all through – a sexual plaything for Glen and the Magician – either of which may be the father of her baby – and the brunt of Glen’s hissy fits about the various things in his bombed-out world that frustrates him. Glen, though intelligent and a searcher, is selfish and abusive of his partner. The tribe, if you want to call it that, is humanity on its last legs, scrabbling for crumbs in the dirt, disengaged and barely able to raise an expression on their grime-streaked faces. The Magician is a sneaky opportunist who uses the cheapest of tricks to snaffle material goods and sexual pleasure for himself. Even the apparently kind-hearted Sidney is shell-shocked and obsessive- compulsive in his daily routine. It’s also telling that he wants to get involved in the sex between Glen and Randa. Once the baby’s born, I can’t imagine feeding him goat’s milk will do him much good, and their journey out to sea in a boat barely bigger than a bathtub seems like certain doom to me. Not much whimsy this time around! No, Glen and Randa is the dwindling swan-song of the human race, even if Glen showed a few of the qualities that can lift us up – curiosity, the desire to learn and discover more about the world. In the end, the weight of the apocalypse is too much.

As directed by Jim McBride, Glen and Randa is visually quite interesting. Scenes are quite short, and fade out quickly as we move to the next step in the couple’s awkward journey. There are no mohawks or biker-fetish armour in this 1971 world. People are barely surviving, dressed in whatever they can get their hands on, which is usually just rags. Only the conniving Magician displays some sartorial flair in whatever he can scrounge from the wreckage. Performances from all the cast (except for the theatrical Garry Goodrow) are all pretty naturalistic, and if you were to jump in at a random point in the film, you could be forgiven in thinking you were watching a documentary. Do I recommend Glen and Randa? It’s worth a view for those that enjoy films that explore post-holocaust worlds. No mutants, no marauding biker gangs or high-speed wasteland chases. Just a small journey exploring the misery of humans cast adrift from their civilisation and shuffling into oblivion. Judging from this story, it’s best if we don’t have to start again, we’d be better off trying to keep our current world a healthy and functional one.

Definitely not for all tastes, Glen and Randa has a nudie-cutie – but hardly X-rated - start in an Eden-like world, but leaves us with a fair bit of solemn thinking by the time it’s over. I’ll have to watch it again in a few years, and see if there’s any uplifting elements in it. It’s simple structure may hide complexities that Mister McBride has hidden, like cans of food to be unearthed from the rubble. Time will tell!