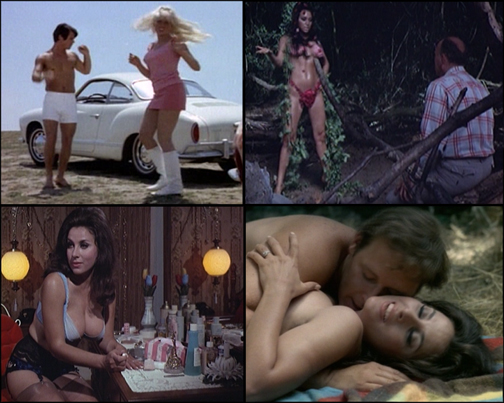 There must be a good case for iconic director Russ Meyer to be known as the Shakespeare of cult cinema. Or, at the very least, cult sinema. Meyer conducts filmic gems filled with brutal, wonderfully staged violence, fills virtually every second with incredible, memorable dialogue and explores intense themes of humanity such as hatred, greed, love, lust and jealousy. On the more modern cinematic side, Meyer fills his screen with the visual delights of incomparable editing and pneumatic women that men wouldn't dream of seeing outside of their wildest fantasies. Good Morning and Goodbye! is no exception to this description in any way, shape or form.

Our first sight is a voluptuous nude woman running through the countryside while our narrator gives us just about every alternate word for sex. We soon realize though, that the introduction to our characters is going to give us an example of where sex goes wrong. While his seventeen-year-old daughter Lana (Karen Ciral) dances and cavorts with a local boy, fifty-year-old Burt Boland's marriage is falling apart. His wife Angel - Meyer often uses this name - played by the stunningly gorgeous Alaina Capri, is fed up with his impotence. Angel uses harsh words on Burt (Meyer regular Stuart Lancaster) and leaves to meet up with the beefy stud-about-town and all-round tough guy, Stone (Patrick M. Wright), who also happens to work in a quarry, funnily enough. Angel leaves and Burt shoots at her pillow in a rage, as his daughter sobs and tries to comfort him. The affair is common knowledge and though furious, Burt appears powerless to do anything about it. Angel and Lana also hate each other, with Angel telling Lana - in front of Burt - how her father sent her mother away and she drifted into prostitution.

The 'relationship' between Angel and Stone is not exactly a loving one and Angel knows this. They're both just in it for the sex, and are under no illusions about either of them being exclusive. In fact, Angel has gained a reputation about town and admits that she's a 'biological freak' with big needs when it comes to sex. Angel and Stone seem to spend as much time insulting each other during their liaisons as screwing, but it works for them. Lana and the local boy, Ray (Don Johnson) meet up again and Lana asks Ray to make love to her. Ray backs off, asking her to cool it and not rush things too much. The frustrated Lana storms off, claiming she's just as good as Angel, though even as a virgin, she's an admittedly an 'amateur'.

Burt drives into the forest in a jeep to ponder his life. After a few minutes he becomes aware that someone's watching. And someone is. 'The Sorceress' (Meyer regular Haji in a silent role), a sort-of-forest-spirit-come-witch, has been following the sad man, and finally Burt spots her. The semi-naked woman leads him into the forest further with weird cat-like noises. Something about her compels him to follow her. Suddenly Burt's hoisted up, feet first, by the ropes of the Sorceress's trap. Screaming for help, Burt then quietens down as she moves closer, weaving some kind of magic around him ...

Later Angel continues her verbal abuse of Burt, who's returned home. Something about Burt has changed though, he now has a quiet inner confidence. Still, Angel doesn't care and resolves to keep up the affair with Stone. Burt says he may be able to start an affair of his own - with the right partner. A partner from another age, another reality. Angel leaves confused. Stone find his way into his workmate Herb's wife's bed. Herb (Tom Howland) discovers them and tries to attack Stone but in a bloody fight - with Stone fighting nude - the larger man gets the better of Herb and knocks him unconscious. There's no love between Herb and his wife as we see earlier in a screaming match in a pickup truck, and she falls back into bed with the bruiser.

Ray turns up at Burt's house looking for Lana, but finds only the buxom Angel lounging, bikini-clad at the pool. She convinces him to rub tanning lotion on her back and begins to seduce him, then Lana shows up. The two women fight and of course, end up in the pool. Burt shows up and breaks up the fracas, and Ray leaves, bemused by it all. Burt returns to the forest and meets the Sorceress again. Dressed in a revealing outfit, she draws her own blood with a knife, sends it into a bubbling potion and begins an erotic dance around the balding, middle-aged man. With a puff of smoke and flame, the Sorceress's costume changes to the flower-petal bikini we see pictured above. We can feel Burt become overcome with lust as he leaps on her, making love in a frenzy. Now, as a balding, middle-aged man myself, it's something of a comfort to believe a sexy forest-nymph would consider having sex with someone like me, so I like this scene a lot! All pure fantasy of course, but Stuart Lancaster outdoes himself depicting Burt's new-found libido surging back. Still, with the semi-naked Haji cavorting around him, maybe he didn't need to act so much. I think this is one of the most erotically charged scenes ever put to film, even though it's a bit silly too!

Angel and Stone meet for one final time, and after a few nasty comments from Stone, Angel realizes what a heartless creep he truly is. She says goodbye to him for a uncertain future, back to an empty marriage with Burt. Once Angel has left, the frustrated and dissapointed Lana shows up, confused and looking for some kind of experience. The gleeful Stone invites her in.

Angel wakes up, nude in the bed, to see Burt standing over her with a newfound sensual energy. At first she can't believe it, but comes to accept it and they have sex, their shaky relationship somewhat renewed. Lana returns, disheveled, and admits to her father that she had sex with Stone. Furious, yet with determination, Burt leaves the house to confront him. Ray turns up to ask Lana to marry him, but Burt just brushes him off and roars past in the jeep. He attacks the startled Stone and they engage in a brutal and drawn-out fight. The brawnier, younger man gets the upper hand, knocks Burt out and is about to crush him with a load of rocks. Herb, battered and bruised from his own fight with Stone and still reluctantly working with him, sees that his boss is about to kill a guy ... and also the opportunity to get revenge on his battle-tired foe. Will Burt recover and return to his wife, now finally his lover, or end up flattened by a pile of Stone's stones?

What a film. While there are only fleeting moments of the outright sex and nudity that lets rip in later Meyer films, Good Morning and Goodbye! more than makes up for this in character development. There's no out-and-out bad guys here, although Stone is a pretty uncaring piece of work. Alaina Capri's Angel is a complex person, still loving her husband - on several occasions she tells him she'd rather get her sex at home - but unable to bear the sexless farce the marriage turned out to be, right from the start. Alaina seems to be channelling Mae West on a number of occassions, but with a body like hers, she had a right to give it a try. Why on earth did this gorgeous woman only make two films - this and Meyer's Common Law Cabin? We are all the poorer for the shortness of this woman's acting career. Stuart Lancaster can certainly act after watching his performance as Burt. We see him at a low ebb at the beginning of the film, totally demoralized by the constant browbeating he receives from Angel. We experience his impotent fury as she puts him down in front of his teenage daughter. Once Burt meets Haji in the forest, things begin to change. Regaining his virility, Burt becomes straight-backed, more composed and radiating inner strength. It's no wonder he takes off, strong and raging, after the burly Stone once he realises he'd slept with his daughter. The renewed man feels like nothing can stop him now. Without completely giving away the ending, the resolution of it all does make you smile.

Perhaps most of all, Good Morning and Goodbye! makes you think about the nature of sex. At the start, Burt can't do it. Angel the 'biological freak' needs it, and desperate, decides to go out and get it - but really wants to be with Burt. Burt, through Haji, finds a way to get his mojo back and ends up having sex with his wife - finally. The younger Stone is made out to be a good lover technically, but is an ass of a person. In the end it's not enough for Angel and she returns home. The icing on the cake is that she can actually have sex with the middle-aged man she loves. As the narrator says, even 'losers' should give sex a try because when it's good it's completely worth it.

I can't think of a single Russ Meyer film that isn't worth owning and viewing numerous times. Good Morning and Goodbye! unreservedly comes with this recommendation, not just for the bountiful bodies and well-choreographed fisticuffs, but for the ability to stay in your mind and make you think about relationships. It's truly a work of art, and you've still got those scenes with Haji in the flower-petal bikini!